Building the tools of the next manufacturing revolution 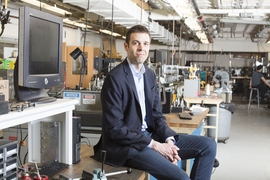 Over a century ago, a visitor to Henry Ford’s new assembly line in Highland Park, Michigan, could watch workers build automobiles from interchangeable parts, and witness a manufacturing revolution in progress.

Today, someone who wants to glimpse the future of manufacturing should make a visit to John Hart’s lab. Through projects including next-generation 3-D printers, carbon nanotube fibers for use in electric motors and lightweight composites, and printing flexible materials for medical devices, Hart and his research group are developing technologies to reimagine the way things are made, from the nanoscale to the scale of the global economy.

Hart, an associate professor of mechanical engineering at MIT and the director of the Laboratory for Manufacturing and Productivity and the Center for Additive and Digital Advanced Production Technologies, is an expert in 3-D printing, also known as additive manufacturing, which involves the computer-guided deposition of material layer by layer into precise three-dimensional shapes. (Conventional manufacturing usually entails making a part by removing material, for example through machining, or by forming the part using a mold tool.)

Hart’s research includes the development of advanced materials — new types of polymers, nanocomposites, and metal alloys — and the development of novel machines and processes that use and shape materials, such as high-speed 3-D printing, roll-to-roll graphene growth, and manufacturing techniques for low-cost sensors and electronics.

“In my lab, through our partnerships with industry and via the startup companies I’m involved in, we’re seeking to redefine manufacturing at scale and rethink how resources are committed to manufacturing throughout the product life cycle,” Hart says. “One major focus is creating new kinds of 3-D printers. These are printers that are 10 to 100 times faster, more accurate, and process both well-known materials and materials that have never been possible before.”

A focus on applications and scale

Hart grew up in the Detroit area — one of the country’s great manufacturing hubs since Henry Ford’s time  — and studied mechanical engineering as an undergraduate at the University of Michigan. He spent summers interning for General Motors, and when he started in the master’s degree program in mechanical engineering at MIT, he thought he would eventually make his way back to the auto industry.

Once he got to Cambridge, though, new horizons opened up. “Coming to MIT, I simply enjoyed the environment, the sense of challenge, learning, and open-mindedness,” he says.

Hart’s work with his advisor, professor of mechanical engineering Alexander Slocum, sparked an interest in nanomaterials manufacturing. He decided to pursue a PhD investigating new ways to build carbon nanotubes, which are long molecules that are stronger than steel and more conductive than copper.

When he returned to MIT in 2013 as a new faculty member, after several years as a professor at the University of Michigan, he started exploring another new frontier: 3-D printing.

As the director of the newly formed MIT Center for Additive and Digital Advanced Production Technologies and the co-founder of two Boston-area 3-D printing startups — Desktop Metal and VulcanForms — Hart is advancing this frontier on multiple fronts, through education, entrepreneurship, and engagement with industry.

Although the research projects in his lab span from the nanoscale to the macroscale, he has an eye trained on the bigger picture. Leveraging advances in computation, digitization, and automation, along with his own expertise with materials processing and machine design, Hart’s group sees the potential for 3-D printing to dramatically streamline and speed up global supply chains. The group is also pursuing a series of projects related to Hart’s longstanding interest in carbon nanotubes, exploring ways to form nanotubes into advanced wires, fibers, and structural composites.

And, he is motivated by finding new applications to benefit society at large. “That could be a better medical implant or sensor to measure the health of soil, a wire that is more conductive than copper, or a new business enabled by rapid access to 3-D printing in a dense city or a rural environment,” he says.

“If you want to make a new medical device, or even an automotive part, think of the supply chain you have to figure out and manage. Every part requires a lot of detail, time and investment to design, validate, and eventually produce, whether it’s made locally or overseas. One reason 3-D printing is fundamentally different is that it allows designers and engineers to iterate more quickly, and to, in the near future, produce parts on demand in large quantities without fixed up-front investment.”

To be sure, “It’s not that 3-D printing will replace all of manufacturing or even a tenth of it in the near future,” Hart says. “It is the cornerstone of a digital transformation in the way we go about designing, producing, and servicing products in a responsive, market-driven manner.”

As these new technologies become more widely used, the resulting changes in industrial manufacturing processes could have profound implications for the workers of the future, and for their training and education. Hart is deeply engaged with those questions, too.

“We also like to think at the system level, in terms of economic modeling of new manufacturing technologies including 3-D printing, and understanding how companies work and what transformations may be needed in product-development processes and in the skills of their employees,” he says.

That research has been inspired by Hart’s involvement in MIT’s Work of the Future initiative, for which he’s assembled a team to examine how demands on workers across the product life cycle — from the designer to the engineer to the production worker — will be influenced by the rise of automation and digitization.

Hart’s own workflow has become ever more diverse, in pace with the rapid developments in the field. But his teaching, research, and work with industry all go hand in hand, he says. “It’s all symbiotic. All these activities and interests feed to and from one another. We also have a prime responsibility to consider the sustainability of the manufacturing technologies that we develop, and the implications of more flexible manufacturing — both positive and negative — on the resource pressures of the planet.”

In addition to his own experience as an entrepreneur — and becoming co-inventor of more than 50 pending and issued patents — Hart gains insights and energy from teaching industry professionals and students alike.

He’s a recipient of the prestigious Ruth and Joel Spira Award for Distinguished Teaching at MIT, as well as the MIT Keenan Award for Innovation in Undergraduate Education, for his work teaching MIT’s flagship undergraduate manufacturing course 2.008 (Design and Manufacturing) and its equivalent as an open online course on edX. As the Department of Mechanical Engineering’s “Maker Czar,” he oversees the design and manufacturing shops used by hundreds of students, working with instructors and various department leaders to make sure facilities have state-of-the-art equipment and capabilities and that students become proficient with both established and emerging technologies.

He also created and leads an online MITxPro course for professionals, “Additive Manufacturing for Innovative Design and Production,” which has enrolled over 2,500 participants from around the world who have sought to learn the fundamentals and applications of 3-D printing and apply this knowledge to their jobs.

“The experience of teaching and developing courses for industry, both in person and digitally, has been incredibly helpful in shaping my perspective of how we at MIT can contribute to the future of manufacturing,” Hart says.

VulcanForms, an MIT startup co-founded by Prof. John Hart, is a 3D printing company that aims to provide cutting edge, clean and futuristic manufacturing, reports Timothy Aeppel for Reuters. “VulcanForms builds metal parts by layering on and fusing together materials bit by bit – rather than cutting them out of blocks of metal or stamping them out in metal foundries,” writes Aeppel.

VulcanForms, an MIT startup, has developed a 3-D printer that can “generate 100 times the laser energy of most 3-D printers, and can produce parts many times faster,” reports Steve Lohr for The New York Times. “Additive manufacturing lets us rethink how we build things,” explains Martin Feldmann MEng ’14, co-founder, president and CEO of VulcanForms. “That’s where we are now, and that’s a big change.”