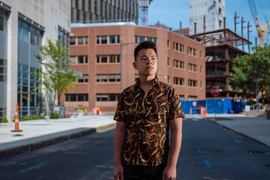 During a trip to Brussels in 2013, Jia Hui Lee decided to visit the Royal Museum of the Armed Forces and Military History. While there, he stumbled upon a poster depicting a rat on the ground next to a partially visible land mine. It was April 4, International Mine Awareness Day, and the poster was part of a display about the use of rodents to detect land mines.

“When you think about war, you think about these big technological tools, vehicles, and systems. Then to see this image of a rat, it was quite jarring and piqued my interest immediately,” says Lee, a fifth-year doctoral student in MIT’s History, Anthropology, and Science, Technology, and Society (HASTS) program.

He had been thinking about humanity’s relationship with other animals and the environment during the era of climate change, and the display provided the kernel of his PhD thesis, which looks at human-rodent interactions in Tanzania, where humans are training rats to detect landmines, as well as tuberculosis.

As a queer man of color, Lee has frequently questioned ideas about power, privilege, and people’s places in society, including his own. With his graduate work, he is extending these questions to consider cross-species interactions and what they say about the impact of technology on society and politics. Throughout his studies, the ethical considerations of anthropology, including who gets to speak for the experiences of others and what experiences are studied in the first place, have remained central to Lee’s work.

For his thesis, Lee completed 15 months of field research in Tanzania examining how trainers interacted with, talked about, and ultimately conditioned rats in order to get them to find land mines. He later spent two months in Cambodia to see how the animals worked in the field. The Tanzanian-trained rats were deployed in an area to clear possible land mines, and after they determined that there were no active mines in that site, Lee took a walk through the area. He jokes that the fact that he’s still alive to talk about the experience demonstrates the success of the training.

Lee is very careful about how he talks about the nonhuman animals in his research, to acknowledge the cross-cultural differences in how humans think about them. For instance, many people in Tanzania consider rats to be intelligent and helpful, whereas in New York City, for example, they are more commonly viewed as vermin. Likewise, Lee notes that in the U.S. and European countries, dogs are generally viewed as humans’ best friends and treated as part of the family. In places like Tanzania and Kenya, however, he says dogs are often viewed as vicious and fierce, because of the historic use of dogs by colonial British police officers to violently control anticolonial protesters, and later as guards against theft.

“The knowledge I hope to produce out of this research is in conversation with zoology, biology, and cognitive science. It includes histories of human-animal interactions which are usually left out in other kinds of disciplines,” Lee says.

His focus on East Africa grew in part out of previous research on the growing science and technology markets in the region. Although the technology scene in East Africa is flourishing, he notes, this growth doesn’t get the same recognition as tech hubs in the West.

As a person who is concerned with power and privilege, it is no surprise that Lee has advocated on behalf of the Institute’s graduate community. As a graduate fellow for the Institute Community and Equity Office, Lee worked with Professor Ed Bertschinger and other fellows to find ways to candidly discuss the state of diversity and inclusion at MIT.

“Over the course of a semester, we hosted discussion lunches that included students, staff, and faculty to share best practices in different departments that foster inclusion at the Institute,” Lee says.

He also served on the Working Group on Graduate Student Tuition Models to gather data about grad students’ experiences with some of the Institute’s funding structures. He compiled the stories of various members of the graduate community to present to the Institute’s administration in order to demonstrate the ways that students’ well-being could be enhanced. MIT’s senior leadership has now begun seeking ways to alleviate financial insecurity faced by some of the Institute’s graduate students and has also launched a new effort to better support those with families.

Citizen of the world

Lee has wide-ranging interests in history and culture, and one of his favorite things to do in his free time is to walk around and analyze Boston’s architecture. After living in the area on and off for about a decade, he says he really enjoys getting to know Boston and its physical changes intimately. He thinks it’s fascinating to think about the city’s transformation from a part of the sea hundreds of years ago to the urban hub it is now. Throughout his travels the past few years, he has picked up bits of art and architectural history that have informed his understanding of some of Boston’s iconic landmarks.

“In Boston, there's a lot of Italian influences on certain architecture, so the Isabella Stewart Gardner Museum looks like an Italian Renaissance palazzo, which is so quirky. But then Back Bay, especially Commonwealth Avenue, was designed to resemble a French boulevard,” Lee explains.

Beyond Boston and Tanzania, Lee has been all over the world, and picked up various languages in the process. He speaks Malay, Swahili, French, English, Hindi, and Urdu, and a bit of several Chinese dialects. In his adventures, Lee has also recognized the value of being alone, and he advocates for solo travel. It invites unique experiences, he says, which for him has included being brought to dance clubs and even a Tanzanian wedding.

“I feel like the likelihood of randomly meeting a person or stumbling into an event or a festival is so much higher than if you're traveling with somebody. And when you're alone, I think people do draw you into whatever events they are going to,” Lee says.