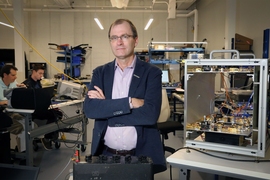 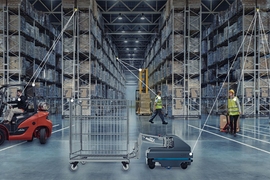 David Mindell has spent his career defying traditional distinctions between disciplines. His work has explored the ways humans interact with machines, drive innovation, and maintain societal well-being as technology transforms our economy.

And, Mindell says, he couldn’t have done it anywhere but MIT. He joined MIT’s faculty 23 years ago after completing his PhD in the Program in Science, Technology, and Society, and he currently holds a dual appointment in engineering and humanities as the Frances and David Dibner Professor of the History of Engineering and Manufacturing in the School of Humanities, Arts, and Social Sciences and professor of aeronautics and astronautics.

Mindell’s experience combining fields of study has shaped his ideas about the relationship between humans and machines. Those ideas are what led him to found Humatics — a startup named from the merger of “human” and “robotics.”

Humatics is trying to change the way humans work alongside machines, by enabling location tracking and navigation indoors, underground, and in other areas where technologies like GPS are limited. It accomplishes this by using radio frequencies to track things at the millimeter scale — unlocking what Mindell calls microlocation technology.

The company’s solution is already being used in places like shipping ports and factories, where humans work alongside cranes, industrial tools, automated guided vehicles (AGVs), and other machines. These businesses often lack consistent location data for their machines and are forced to adopt inflexible routes for their mobile robots.

“One of the holy grails is to have humans and robots share the same space and collaborate, and we’re enabling mobile robots to work in human environments safely and on a large scale,” Mindell says. “Safety is a critical first form of collaboration, but beyond that, we’re just beginning to learn how to work [in settings] where robots and people are exquisitely aware of where they are.”

A company decades in the making

MIT has a long history of transcending research fields to improve our understanding of the world. Take, for example, Norbert Wiener, who served on MIT’s faculty in the Department of Mathematics between 1919 and his death in 1964.

Wiener is credited with formalizing the field of cybernetics, which is an approach to understanding feedback systems he defined as “the scientific study of control and communication in the animal and the machine." Cybernetics can be applied to mechanical, biological, cognitive, and social systems, among others, and it sparked a frenzy of interdisciplinary study and scientific collaboration.

In 2002, Mindell wrote a book exploring the history of cybernetics before Wiener and its emergence at the intersection of a range of disciplines during World War II. It is one of several books Mindell has written that deal with interdisciplinary responses to complex problems, particularly in extreme environments like lunar landings and the deep sea.

The interdisciplinary perspective Mindell forged at MIT has helped him identify the limitations of technology that prevent machines and humans from working together seamlessly.

One particular shortcoming that Mindell has thought about for years is the lack of precise location data in places like warehouses, subway systems, and shipping ports.

“In five years, we’ll look back at 2019 and say, ‘I can’t believe we didn’t know where anything was,’” Mindell says. “We’ve got so much data floating around, but the link between the actual physical world we all inhabit and move around in and the digital world that’s exploding is really still very poor.”

In 2014, Mindell partnered with Humatics co-founder Gary Cohen, who has worked as an intellectual property strategist for biotech companies in the Kendall Square area, to solve the problem.

“It was clear there was about to be this huge flowering of robotics and autonomous systems and AI, and I thought the things we learned in extreme environments, notably under sea and in aviation, had an enormous amount of application to industrial environments,” Mindell says. “The company is about bringing insights from years of experience with remote and autonomous systems in extreme environments into transit, logistics, e-commerce, and manufacturing.”

Factories, ports, and other locations where GPS data is unworkable or insufficient adopt a variety of solutions to meet their tracking and navigation needs. But each workaround has its drawbacks.

RFID and Bluetooth technologies, for instance, can track assets but have short ranges and are expensive to deploy across large areas.

Cameras and sensing methods like LIDAR can be used to help machines see their environment, but they struggle with things like rain and different lighting conditions. Floor tape embedded with wires or magnets is also often used to guide machines through fixed routes, but it isn’t well-suited for today’s increasingly dynamic warehouses and production lines.

Humatics has focused on making the capabilities of its microlocation location system as easy to leverage as possible. The location and tracking data it collects can be integrated into whatever warehouse management system or “internet of things” (IoT) platforms customers are already using.

Its radio frequency beacons have a range of up to 500 meters and, when installed as part of a constellation, can pinpoint three dimensional locations to within 2 centimeters, creating a virtual grid of the surrounding environment.

The beacons can be combined with an onboard navigation hub that helps mobile robots move around dynamic environments. Humatics’ system also gathers location data from multiple points at once, monitoring the speed of a forklift, helping a crane operator place a shipping crate, and guiding a robot around obstacles simultaneously.

The data Humatics collects don’t just help customers improve their processes; they can also transform the way workers and machines share space and work together. Indeed, with a new chip just emerging from its labs, Mindell says Humatics is moving industries such as manufacturing and logistics into “the world of ubiquitous, millimeter-accurate positioning.”

It’s all possible because of the company’s holistic approach to the age-old problem of human-machine interaction.

“Humatics is an example of what can happen when we think about technology in a unique, broader context,” Mindell says. “It’s an example of what MIT can accomplish when it pays serious attention to these two ways [from humanities and engineering] of looking at the world.”

3Q: David Mindell on his vision for human-centered robotics

Q&A: On the future of human-centered robotics