How Greentown Labs became the epicenter of clean tech 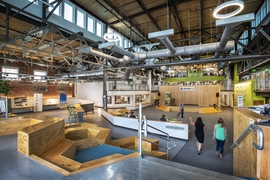 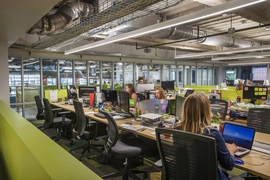 ↓ Download Image
Caption: “Greentown offers a lot of different things, but first and foremost among them is a community of entrepreneurs who are striving to solve big challenges in climate, energy, and the environment,” says Greentown Labs CEO Emily Reichert MBA ’12.
Credits: Images: Barry Hetherington

Caption:
Greentown Labs is the largest clean technology incubator in North America by both square feet and the number of member companies. The open layout of its entrance, shown here, is designed to host events and encourage collaboration.
Credits:
Images: Barry Hetherington

Caption:
“Greentown offers a lot of different things, but first and foremost among them is a community of entrepreneurs who are striving to solve big challenges in climate, energy, and the environment,” says Greentown Labs CEO Emily Reichert MBA ’12.
Credits:
Images: Barry Hetherington

Greentown Labs is the largest clean technology incubator in North America, a fact that’s easy to accept when you walk inside. The massive, open entrance of Greentown’s Somerville headquarters gives visitors the impression they’ve entered the office of one of Greater Boston’s most successful tech companies.

Beyond the modern entryway are smaller working spaces — some cluttered with startup prototypes, others lined with orderly lab equipment — to enable foundational, company-building experiments.

In addition to the space and equipment, Greentown offers startups equity-free legal, information technology, marketing, and sales support, and a coveted network of corporations and industry investors.

But what many entrepreneurs say they like most about Greentown is the people.

“Greentown offers a lot of different things, but first and foremost among them is a community of entrepreneurs who are striving to solve big challenges in climate, energy, and the environment,” says Greentown Labs CEO Emily Reichert MBA ’12.

Greentown is full of stories of peers bumping into each other in the kitchen only to find they’re struggling with similar problems or, even better, that one of them already grappled with the problem and found a solution.

The current version of Greentown looks like the result of some well-funded, grand vision set forth long ago. But Greentown’s rise was every bit as spontaneous — and tenuous — as the early days of any startup.

A space for building

In 2010, Sorin Grama SM ’07 and Sam White were looking for office space to work on a new chiller design for their startup, Promethean Power Systems, which still develops off-grid refrigeration systems in India. They needed a place to build the big, leaky refrigeration prototypes they’d thought up. It also needed to be close to MIT, where the company founders connected with advisors and interns.

Eventually, White found “a dilapidated warehouse” on Charles Street in Cambridge for the right price. What the space lacked in beauty it made up for in size, so the founders decided to use an MIT email list to see if other founders wanted to join them. Some founders building an app were first to respond. Their first reaction upon seeing the space was to ask White and Grama to clean up a bit, and they were politely shown the door.

Without exactly intending to, Grama and White had made their warehouse a builder space. Over the next week, a few more founders came in, including Jason Hanna, the co-founder of building efficiency company Embue; Jeremy Pitts SM ’10, MBA ’10, who was creating more efficient compressor systems for the oil and gas industry as the founder of Oscomp Systems; and Adam Rein MBA ’10 and Ben Glass ’07 SM ’10, whose company Altaeros was building airborne wind turbines. The warehouse looked perfect to them.

“What we all had in common was we just needed a space to prototype and build stuff, where we could spill stuff, make noise, and share tools,” Grama says. “Pretty quickly it became a nice band of startups that appreciated the same thing.”

The winter of 2010-2011 was a freezing one in the warehouse, made worse by icy cement floors, but the founders couldn’t help but notice the benefits of working together. Any time an intern or investor came to see one company, they were introduced to the others. Founders with expertise in areas like grant writing or funding rounds would give lunchtime presentations to help the others.

Rein remembers thinking he was in the perfect environment to succeed despite the sometimes comical dysfunction of the space. One day an official with the United States Agency for International Development (USAID) stopped by to evaluate one of the startups for a grant. The visit went well enough — until she got locked in the bathroom. The founders eventually got her out, but they didn’t think the incident boded for their chances of getting that grant.

When the landlord kicked them out of Charles Street, they found a similar space in South Boston, recruiting friends and employees to help strip wires, scrape walls, and paint. Rein recalls his regular duties included ordering toilet paper for the building.

The space was also twice as large as the one in Cambridge, so as Greentown’s reputation spread throughout 2011, five startups became 15, then 20.

“It really took on a life of its own,” Grama says.

Among the curious MIT students who journeyed to Greentown that year was Reichert. Having worked as a chemist for 10 years in spotless, safety-certified labs, she was shocked to see the condition of Greentown.

“The first time I walked in I had two gut reactions,” Reichert says. “The first was I felt this amazing energy and passion, and kind of a buzzing. If you walk into Greentown today you still feel those things. The second was, ‘Oh my god, this place is a death trap.’”

After earning her MBA at MIT, Reichert initially helped out as a consultant at Greentown. By February of 2013, she joined Greentown to run it full time. It was a critical time for the growing co-op: White and Grama were getting ready to move to India to work on Promethean, and Hanna, who had primarily led Greentown to that point, was expecting the birth of his first child.

At the same time, real estate prices in South Boston were skyrocketing, and Greentown was again forced to move.

Reichert, who worked as CEO without a salary for more than a year, remembers those first six months on the job as the most stressful of her life. With no money to put toward a new space, she was able to partner with the city of Somerville to secure some funding and find a new location. Reichert signed a construction contract to renovate the Somerville space before she knew where the money would come from, and began lobbying state and corporate officials for sponsorships.

She still remembers the day Greentown was to be evicted from South Boston, with everyone scrambling to clean out the cluttered warehouse and a few determined founders running one last experiment until 7 p.m. before throwing the last of the equipment in a U-Haul and beginning the next phase of Greentown’s journey.

Within 15 months of the move to Somerville, Greentown’s 40,000 square feet were completely filled, and Reichert began the process of expanding the headquarters.

Since its inception, Greentown has supported more than 200 startups that have created around 2,800 jobs, many in the Boston area.

The original founders still serve on Greentown’s board of directors, ensuring every dollar Greentown makes goes toward supporting startups.

Of the founding companies, only Promethean and Altaeros are still housed in Greentown, although they’re all still operating in some form.

“We probably should’ve moved out, but it’s important to work in a place you really enjoy,” Rein says of Altaeros.

Grama, meanwhile, has come full circle. After ceding the reigns of Promethean and returning from India, last year he started another company, Transaera, that’s developing efficient, environmentally friendly cooling systems based on research from MIT.

This time, it took him a lot less time to find office space.