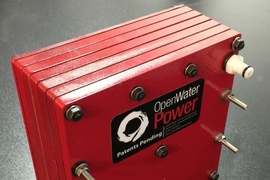 ↓ Download Image
Caption: Open Water Power’s battery that "drinks" in sea water to operate is safer and cheaper, and provides a tenfold increase in range, over traditional lithium-ion batteries used for unpiloted underwater vehicles. The power system consists of an alloyed aluminum anode, an alloyed cathode, and an alkaline electrolyte positioned between the electrodes. Components are only activated when flooded with water. Once the aluminum anode corrodes, it can be replaced at low cost.
Credits: Courtesy of Open Water Power

Caption:
Open Water Power’s battery that "drinks" in sea water to operate is safer and cheaper, and provides a tenfold increase in range, over traditional lithium-ion batteries used for unpiloted underwater vehicles. The power system consists of an alloyed aluminum anode, an alloyed cathode, and an alkaline electrolyte positioned between the electrodes. Components are only activated when flooded with water. Once the aluminum anode corrodes, it can be replaced at low cost.
Credits:
Courtesy of Open Water Power

The long range of airborne drones helps them perform critical tasks in the skies. Now MIT spinout Open Water Power (OWP) aims to greatly improve the range of unpiloted underwater vehicles (UUVs), helping them better perform in a range of applications under the sea.

The power systems could find a wide range of uses, including helping UUVs dive deeper, for longer periods of time, into the ocean’s abyss to explore ship wreckages, map the ocean floor, and conduct research. They could also be used for long-range oil prospecting out at sea and various military applications.

With the acquisition, OWP now aims to ramp up development of its power systems, not just for UUVs, but also for various ocean-floor monitoring systems, sonar buoy systems, and other marine-research devices.

OWP is currently working with the U.S. Navy to replace batteries in acoustic sensors designed to detect enemy submarines. This summer, the startup will launch a pilot with Riptide Autonomous Solutions, which will use the UUVs for underwater surveys. Currently, Riptide’s UUVs travel roughly 100 nautical miles in one go, but the company hopes OWP can increase that distance to 1,000 nautical miles.

“Everything people want to do underwater should get a lot easier,” says co-inventor Ian Salmon McKay ’12, SM ’13, who co-founded OWP with fellow mechanical engineering graduate Thomas Milnes PhD ’13 and Ruaridh Macdonald '12, SM '14, who will earn his PhD in nuclear engineering this year. “We’re off to conquer the oceans.”

Most UUVs use lithium-based batteries, which have several issues. They’re known to catch fire, for one thing, so UUV-sized batteries are generally not shippable by air. Also, their energy density is limited, meaning expensive service ships chaperone UUVs to sea, recharging the batteries as necessary. And the batteries need to be encased in expensive metal pressure vessels. In short, they’re rather short-lived and unsafe.

In contrast, OWP’s power system is safer, cheaper, and longer-lasting. It consists of a alloyed aluminum, a cathode alloyed with a combination of elements (primarily nickel), and an alkaline electrolyte that’s positioned between the electrodes.

Components are only activated when flooded with water. Once the aluminum anode corrodes, it can be replaced at low cost.

Think of the power system as type of underwater engine, where water is the oxidizer feeding the chemical reactions, instead of the air used by car engines, McKay says. “Our power system can drink sea water and discard waste products,” he says. “But that exhaust is not harmful, compared to exhaust of terrestrial engines.”

With the aluminum-based power system, UUVs can launch from shore and don’t need service ships, opening up new opportunities and dropping costs. With oil prospecting, for example, UUVs currently used to explore the Gulf of Mexico need to hug the shores, covering only a few pipeline assets. OWP-powered UUVs could cover hundreds of miles and return before needing a new power system, covering all available pipeline assets.

Consider also the Malaysian Airlines crash in 2014, where UUVs were recruited to search areas that were infeasible for equipment on the other vessels, McKay says. “In looking for the debris, a sizeable amount of the power budget for missions like that is used descending to depth and ascending back to the surface, so their working time on the sea floor is very limited,” he says. “Our power system will improve on that.”

The OWP technology started as the co-founders’ side project, which was modified throughout two MIT classes and a lab. In 2011, McKay joined 2.013/2.014 (Engineering System Design/Development) taught by MIT professor of mechanical engineering Douglas Hart, a seasoned hardware entrepreneur who co-founded Brontes Technologies and Lantos Technologies. Milnes, who was previously a systems engineer at Brontes and co-founded Viztu Technologies, was Hart’s teaching assistant.

The class was charged with developing an alternate power source for UUVs. McKay gambled on an energy-dense but challenging element: aluminum. One major challenge with aluminum batteries is that certain chemical issues make it difficult to donate electrons to a circuit. Additionally, the product of the reactions, the aluminum hydroxide, sticks to the electrode’s surface, inhibiting further reaction. Continuing the work in 10.625 (Electrochemical Energy Conversion and Storage), taught by materials science Professor Yang Shao-Horn, the W. M. Keck Professor of Energy, McKay was able to overcome the first challenge by making a gallium-rich alloyed aluminum anode that successfully donated electrons, but it corroded very quickly.

Seeing potential in the battery, Milnes joined McKay in further developing the battery as a side project. The two briefly moved operations to the lab of Evelyn Wang, the Gail E. Kendall Professor of Mechanical Engineering. There, they began developing electrolytes and alloys that inhibit parasitic corrosion processes and prevent that aluminum hydroxide layer from forming on the anode.

Setting up shop at Greentown Labs in Somerville, Massachusetts, in 2013 — where the company still operates with about 10 employees — OWP further refined the power system’s design. Today, that power system uses a pump to circulate the electrolyte, scooping up unwanted aluminum hydroxide on the anode and dumping it onto a custom precipitation trap. When saturated, the traps with the waste are ejected and replaced automatically. The electrolyte prevents marine organisms from growing inside the power system.

Now OWP’s chief science officer, McKay says the startup owes much of its success to MIT’s atmosphere of innovation, where many of his professors readily offered technical and entrepreneurial advice and allowed him to work on extracurricular projects.

“It takes a village,” McKay says. “Those classes and that lab are where the idea took shape. People at MIT were doing strong science for science’s sake, but everyone was keenly aware of the possibility of bringing technologies to market. People were always having those great ‘What if?’ conversations — I probably had three to four different startup ideas in various stages of gestation at any given time, and so did all my friends. It was an environment that encouraged the playful exchange of ideas, and encouraged people to take on side projects with real prizes in mind.”

UPI reporter Brooks Hays writes about MIT spinout Open Water Power, which developed a battery that can be powered by seawater. Hays writes that the, “technology promises to extend the range and capabilities of unpiloted underwater vehicles, or UUVs.”

Up, down and all around

Dental scanner allows researcher to sink his teeth into entrepreneurship