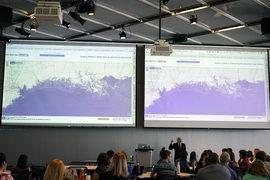 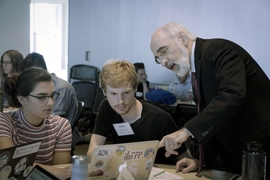 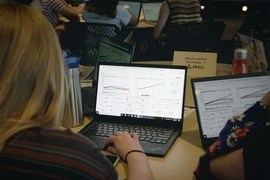 ↓ Download Image
Caption: Students work with the En-ROADS software on their laptop computers as part of the “SimPlanet” event, trying out different climate policy options and immediately seeing the outcomes on their screens.
Credits: Images: Melanie Gonick, MIT

Caption:
Students work with the En-ROADS software on their laptop computers as part of the “SimPlanet” event, trying out different climate policy options and immediately seeing the outcomes on their screens.
Credits:
Images: Melanie Gonick, MIT

Evaluating the many possible strategies for curbing greenhouse gas emissions and limiting the destructive effects of a warming planet is a daunting and contentious task. This week, about 50 MIT students got a chance to try out new software that can visually demonstrate how different policy choices could affect the global outcome.

At Tuesday’s “SimPlanet” event at the MIT Media Lab, students had a chance to beta-test a new interactive energy and climate policy simulation model, En-ROADS, developed jointly by the MIT Sloan Sustainability Initiative and Climate Interactive, a nonprofit, nonpartisan think tank.  Sponsored by MIT’s Environmental Solutions Initiative, the students worked in teams representing each of eight different interest groups — including developed and developing nations, environmental activists, and industries that make and use energy — using the model to explore the impacts of dozens of possible policies and how hard to push for each.

Then John Sterman, the Jay W. Forrester Professor of Management and a lead developer of the simulation, entered each group’s policies into the En-ROADS dashboard, instantly showing how those policies would affect energy use and greenhouse gas emissions between now and the year 2100, and what the expected change in global temperatures, sea level, and other impacts would be.

The nations of the world, through the 2015 Paris Agreement, committed to holding the increase in the global average temperature to well below 2 degrees Celsius compared to preindustrial levels, and pursuing efforts to limit the temperature increase to 1.5 C. As shown by the En-ROADS display, without any new policies, the expected increase by the end of the century would be roughly twice that limit, at approximately 4.1 C.

As the group discovered during the four-hour interactive event, cutting greenhouse gas emissions enough to achieve the goal is difficult. But it is achievable — even without any unproven technological breakthroughs.

That encouraging bottom line was not at all apparent as the role-play began. Each team was provided a confidential briefing memo outlining the priorities of their constituency. The delegations represented the developed nations, rapidly emerging nations (including China, India, and Brazil), developing nations, conventional energy companies (coal, oil, natural gas, and nuclear), clean tech (renewable energy companies), industry and commerce, agriculture and forestry, and climate activists. Conflict quickly emerged as the interests of some groups were directly contrary to those of others — for example, developing versus developed nations, or clean tech versus conventional energy — so in many cases the policies proposed by one group were promptly reversed by another, revealing the complexity of negotiating to find common ground.

The outcome? Less global warming, but not by much: 3.7 degrees Celsius by 2100, far short of the reduction needed and enough to cause significant harm, including extreme weather, declining crop yield, and sea level rise.

To dramatize the reality of such changes, volunteers dragged a large blue sheet over the heads of the participants, providing a visceral feel for being caught under the rising waters. Then Sterman showed images of various coastal cities, revealing how they would be affected by the rising seas and what would happen if these cities were then hit by the storm surge from hurricanes and typhoons such as Dorian. In many cases, such as Miami and Shanghai, entire cities would be inundated.

“The participants saw, for themselves, that it is in their own interests to reach a stronger agreement,” Sterman says. He encouraged members of each group to get up, walk around, and negotiate with the other groups to arrive at a stronger proposal. Adding a touch of realism to the simulation, during an ice-cream break, members of the team representing climate activists and indigenous peoples formed a human chain to block access to the ice cream servers until members of other teams agreed to implement a price on carbon — a policy that the simulation showed to be one of the most effective drivers of emissions reductions.

Throughout the session, Sterman, playing the role of the UN Secretary General, provided background information on climate change and its consequences, and on the pros and cons of the many policy options under consideration, including incentives for new technology, subsidies or taxes on different forms of energy, and policies to encourage efficiency and other changes in energy systems, buildings, transportation, and land use.

The En-ROADS simulation, Sterman explained, is an updated and far more detailed version of one that he has used for several years. Both models have been used by members of Congress and their staffs, national representatives at the actual UN climate negotiations, and political and business leaders around the world, including then-Secretary of State John Kerry and, during a visit at MIT, the Dalai Lama. Participants in SimPlanet used the same model as was used in these briefings.

By the end of the session, participants tried many different proposals, learning which worked best — and which could withstand attempts by other interest groups to roll them back. They discovered that there’s no single policy that can achieve the goal, but the group finally arrived at a set of policies that held the expected warming to just 1.9 C. And they did so using policies that are well within the bounds of what are considered to be technically achievable and economically affordable. “There is no silver bullet, but there is silver buckshot,” Sterman commented.

“Climate change is no longer a science problem,” he declared. “It’s not an engineering problem — we have the technologies we need and they are improving rapidly. It’s not even an economic problem — the costs of action are far lower than the costs of inaction, and many policies generate cobenefits that create jobs and improve public health.” Rather, he said, tackling climate change is a social and political problem that requires personal and political actions to implement the policies needed to cut emissions in time.

“Research shows that showing people research doesn’t work” Sterman says. “Interactive simulations such as SimPlanet enable people to learn for themselves, not only building their knowledge of the issue, but motivating them to take action, personally, professionally, and as citizens working for change.”

Climate negotiation role-play in Paris feels like the real thing

A study in green building on campus