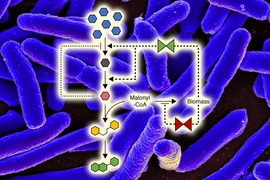 Microbes can be engineered to produce a variety of useful compounds, including plastics, biofuels, and pharmaceuticals. However, in many cases, these products compete with the metabolic pathways that the cells need to fuel themselves and grow.

To help optimize cells’ ability to produce desired compounds but also maintain their own growth, MIT chemical engineers have devised a way to induce bacteria to switch between different metabolic pathways at different times. These switches are programmed into the cells and are triggered by changes in population density, with no need for human intervention.

“What we’re hoping is that this would allow more precise regulation of metabolism, to allow us to get higher productivity, but in a way where we minimize the number of interventions,” says Kristala Prather, the Arthur D. Little Professor of Chemical Engineering and the senior author of the study.

This kind of switching allowed the researchers to boost the microbial yields of two different products by up to tenfold.

MIT graduate student Christina Dinh is the lead author of the paper, which appears in the Proceedings of the National Academy of Sciences this week.

To make microbes synthesize useful compounds that they don’t normally produce, engineers insert genes for enzymes involved in the metabolic pathway — a chain of reactions that generate a specific product. This approach is now used to produce many complex products, such as pharmaceuticals and biofuels.

In some cases, intermediates produced during these reactions are also part of metabolic pathways that already exist in the cells. When cells divert these intermediates out of the engineered pathway, it lowers the overall yield of the end product.

Using a concept called dynamic metabolic engineering, Prather has previously built switches that help cells maintain the balance between their own metabolic needs and the pathway that produces the desired product. Her idea was to program the cells to autonomously switch between pathways, without the need for any intervention by the person operating the fermenter where the reactions take place.

In a study published in 2017, Prather’s lab used this approach to program E. coli to produce glucaric acid, a precursor to products such as nylons and detergents. The researchers’ strategy was based on quorum sensing, a phenomenon that bacterial cells normally use to communicate with each other. Each species of bacteria secretes particular molecules that help them sense nearby microbes and influence each other’s behavior.

The MIT team engineered their E. coli cells to secrete a quorum sensing molecule called AHL. When AHL concentrations reach a certain level, the cells shut off an enzyme that diverts a glucaric acid precursor into one of the cells’ own metabolic pathways. This allows the cells to grow and divide normally until the population is large enough to start producing large quantities of the desired product.

“That paper was the first to demonstrate that we could do autonomous control,” Prather says. “We could start the cultures going, and the cells would then sense when the time was right to make a change.”

In the new PNAS paper, Prather and Dinh set out to engineer multiple switching points into their cells, giving them a greater degree of control over the production process. To achieve that, they used two quorum sensing systems from two different species of bacteria. They incorporated these systems into E. coli that were engineered to produce a compound called naringenin, a flavonoid that is naturally found in citrus fruits and has a variety of beneficial health effects.

Using these quorum sensing systems, the researchers engineered two switching points into the cells. One switch was designed to prevent bacteria from diverting a naringenin precursor called malonyl-CoA into the cells’ own metabolic pathways. At the other switching point, the researchers delayed production of an enzyme in their engineered pathway, to avoid accumulating a precursor that normally inhibits the naringenin pathway if too much of the precursor accumulates.

“Since we took components from two different quorum sensing systems, and the regulator proteins are unique between the two systems, we can shift the switching time of each of the circuits independently,” Dinh says.

The researchers created hundreds of E. coli variants that perform these two switches at different population densities, allowing them to identify which one was the most productive. The best-performing strain showed a tenfold increase in naringenin yield over strains that didn’t have these control switches built in.

“The paper addresses an important problem in the area of regulating metabolic pathways to balance cellular growth versus the production of chemicals,” says Radhakrishnan Mahadevan, a professor of chemical engineering at the University of Toronto, who was not involved in the research. “Previously, the circuits primarily focused on turning off genes related to growth, whereas in this contribution they provide the flexibility to downregulate and upregulate specific genes in response to a trigger.  This advance should provide more flexible control of metabolic pathways and will be valuable to optimize bioprocesses to improve their economic viability.”

The researchers also demonstrated that the multiple-switch approach could be used to double E. coli production of salicylic acid, a building block of many drugs. This process could also help improve yields for any other type of product where the cells have to balance between using intermediates for product formation or their own growth, Prather says. The researchers have not yet demonstrated that their method works on an industrial scale, but they are working on expanding the approach to more complex pathways and hope to test it at a larger scale in the future.

“We think it certainly has broader applicability,” Prather says. “The process is very robust because it doesn’t require someone to be present at a particular point in time to add something or make any sort of adjustment to the process, but rather allows the cells to be keeping track internally of when it’s time to make a shift.”

Squeezing more production out of bacteria