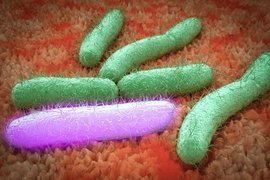 ↓ Download Image
Caption: “The challenge is to engineer a system where we get enough growth to have a productive microbial ‘ chemical factory’ but not so much that we can’ t channel enough of the sugars into a pathway to make large quantities of our target molecules,”says Kristala Prather, an associate professor of chemical engineering at MIT.
Credits: Image: MIT News

Caption:
“The challenge is to engineer a system where we get enough growth to have a productive microbial ‘ chemical factory’ but not so much that we can’ t channel enough of the sugars into a pathway to make large quantities of our target molecules,”says Kristala Prather, an associate professor of chemical engineering at MIT.
Credits:
Image: MIT News

MIT chemical engineers have designed a novel genetic switch that allows them to dramatically boost bacteria’s production of useful chemicals by shutting down competing metabolic pathways in the cells.

In a paper appearing in the Feb. 13 issue of Nature Biotechnology, the researchers showed that they could significantly enhance the yield of glucaric acid, a chemical that is a precursor to products such as nylons and detergents. This genetic switch could also be easily swapped into bacteria that generate other products, the researchers say.

“We can engineer microbial cells to produce many different chemicals from simple sugars, but the cells would rather use those sugars to grow and reproduce. The challenge is to engineer a system where we get enough growth to have a productive microbial ‘chemical factory’ but not so much that we can’t channel enough of the sugars into a pathway to make large quantities of our target molecules,” says Kristala Prather, an associate professor of chemical engineering at MIT and the senior author of the study.

For decades, scientists have been manipulating the genes of microbes to get them to produce large quantities of products such as insulin or human growth hormone. Often this can be achieved by simply adding the gene for the desired product or ramping up expression of an existing gene.

More recently, researchers have been trying to engineer microbes to generate more complex products, including pharmaceuticals and biofuels. This usually requires adding several genes encoding the enzymes that catalyze each step of the overall synthesis.

In many cases, this approach also requires shutting down competing pathways that already exist in the cell. However, the timing of this shutdown is important because if the competing pathway is necessary for cell growth, turning it off limits the population size, and the bacteria won’t produce enough of the desired compound.

Prather’s lab has previously engineered E. coli to produce glucaric acid by adding three genes — one each from yeast, mice, and a strain of bacteria called Pseudomonas syringae. Using these three genes, bacteria can transform a compound called glucose-6-phosphate into glucaric acid. However, glucose-6-phosphate is also an intermediate in a critical metabolic pathway that breaks down glucose and converts it into the energy cells need to grow and reproduce.

To generate large quantities of glucaric acid, the researchers had to come up with a way to shut down the glucose-breakdown pathway, allowing glucose-6-phosphate to be diverted into their alternative metabolic pathway. However, they had to carefully time the shutdown so that the cell population would be large enough to produce a substantial amount of glucaric acid. More importantly, they wanted to do so without adding any new chemicals or changing the process conditions in any way.

“The idea is to autonomously stop the cells from growing, midway through the production run, so that they can really focus all the available glucose sugars into glucaric acid production,” Gupta says.

To achieve this, the researchers took advantage of a phenomenon known as quorum sensing, which is used by many species of bacteria to coordinate gene regulation in response to their population density.

In addition to adding the genes for glucaric acid production, the researchers engineered each cell to produce a protein that synthesizes a small molecule called AHL. The cells secrete this molecule into their environment, and when the concentration surrounding the cells gets to a certain point, it activates a switch that makes all of the cells stop producing an enzyme called phosphofructokinase (Pfk), which is part of the glucose breakdown pathway. With this enzyme turned

off, glucose-6-phosphate accumulates and gets diverted into the alternative pathway that produces glucaric acid. By constructing a library of cells that produce AHL at different rates, the researchers could identify the best time to trigger shutdown of Pfk.

Using this switch, the researchers were able to generate about 0.8 grams of glucaric acid per liter of the bacterial mixture, while cells that were engineered to produce glucaric acid but did not have the metabolic switch produced hardly any.

This type of switch should also be applicable to other engineered metabolic pathways because the genetic circuit can be targeted to shut off other genes.

To demonstrate this versatility, the researchers tested their approach with a metabolic pathway that produces a molecule called shikimate, which is a precursor to several different amino acids and is also an ingredient in some drugs including the influenza drug Tamiflu. They used the AHL quorum-sensing molecule to shut off an enzyme that moves shikimate further along in the amino acid synthesis pathway, allowing shikimate to build up in the cells. Without the switch, the cells could not accumulate any shikimate.

“This paper shows a great potential of dynamic regulation of pathway fluxes, especially the quorum sensing system developed here, which allows precise regulation of a foreign pathway under different conditions including lab and industrial ones. It is therefore very important to invest further to see more value-added products be produced under dynamic metabolic engineering conditions,” says Guo-Qiang Chen, a professor of microbiology and biomaterials at Tsinghua University, who was not involved in the study.

The MIT team is now working on strategies to set up multiple layers of autonomous control, allowing them to shut off one pathway while also turning another one on.

The research was funded by the National Science Foundation, the National Institutes of Health, and the U.S. Department of Agriculture.

Squeezing more production out of bacteria

In a Boston Globe op-ed, MIT’s president argues that the US must invest in new breakthroughs while also deploying all available tools today.