Most academics follow a very traditional path to a job as a professor: earn a PhD, spend a few years as a postdoc, then find a tenure-track job as an assistant professor.

Kristala Jones Prather decided to take a detour from that path. After earning her PhD in chemical engineering at the University of California at Berkeley, Prather chose to spend time outside of academia, working at Merck. Four years later, she launched her own lab at MIT, where she designs new ways to engineer bacteria to synthesize useful chemical compounds such as drugs and biofuels.

“It was not the easiest way to do it, but it was something I was really interested in doing. And it worked well for me,” says Prather, who is now the Theodore T. Miller Associate Professor of Chemical Engineering at MIT.

While working in industry, Prather learned a great deal about mentoring and managing people, she says. That experience also helped shape her current research.

“I don’t think we should always be driven by what industry says they want and need,” she says. However, “if the vast majority of your interactions are always with academics, and in academic settings, then there’s no way you’re getting anything other than an academic view of what’s going on. I decided that I wanted to at least give myself a chance to understand what happens in industry by going to work in industry.” 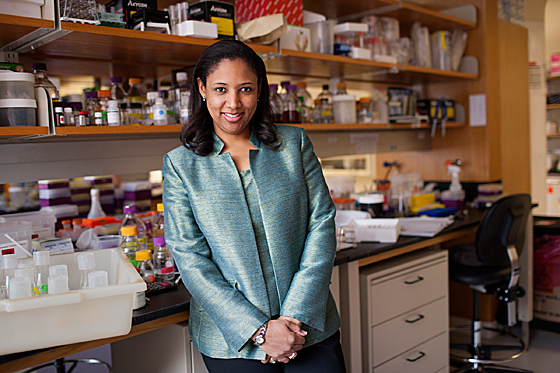 From Texas to MIT

Born in Cincinnati, Prather spent her early childhood in Ohio and Michigan before moving to East Texas when she was 9. In high school she did well in all of her classes, but especially liked math and science. However, she couldn’t envision what kind of career her interests might lead to. “I didn’t have a real sense of what engineering was or what engineers did or even what scientists did,” she says.

A talk with her 11th-grade history teacher helped point her toward chemical engineering. Her teacher also suggested that she aim for MIT — an unusual destination for students from Prather’s high school, where most top students went to the University of Texas or Texas A&M. “I had never heard of MIT. I had no idea what it was, where it was, anything about it whatsoever,” Prather says. After looking into it, she decided MIT was where she wanted to go.

“Before I got to MIT, I was terrified,” she recalls. Her biggest fear was that she wouldn’t be as well prepared as classmates who had attended more prestigious high schools. “I knew I was willing to work hard, but I wasn’t quite sure I could pull it off.”

Prather ended up loving MIT, graduating in 1994. She knew she wanted to major in chemical engineering, but was torn between biotechnology and polymer science. After taking introductory biology, she decided to focus on biotechnology, which was then a fairly new field.

“At MIT I had taken classes where we talked about metabolism and recombinant DNA technology, but I didn’t really know that I could do that as a chemical engineer until I went to visit Berkeley and talked to [Keasling]. He was doing recombinant DNA work, looking at actually engineering the cell itself. I thought that was really neat. Being able to manipulate DNA was something I was very interested in,” Prather says.

While at Merck, Prather worked in many different areas, including biocatalysis — the use of bacterial enzymes to perform a reaction step that cannot be done cost-effectively using traditional chemical processes. Prather would develop an enzyme-driven reaction that could take place inside a cell, then send the resulting compound back into the chemical manufacturing process.

Though she enjoyed working in industry, Prather never deviated from her plan to return to academia. She also realized that what she liked best about her job was training new scientists who came into her group. If she stayed in industry, “the metrics for success were going to take me further and further away from that,” she says, while as a professor, one of her core responsibilities would always be training graduate students and postdocs.

Because she had signed confidentiality agreements before starting her job at Merck, Prather had to start her research program from scratch when she joined the MIT faculty in 2004. “My graduate research was old by then. I didn’t really have anything ready to go. That was the hard part,” she says.

She decided to expand the biocatalysis strategy she had been using at Merck so that she was designing a complete synthesis — rather than just one step — that would take place entirely inside a bacterial cell.

“The concept that I was working on was quite simple: Can we take the idea of biocatalysis, of looking at these enzymes and focusing on their chemistry, and combine that with metabolic engineering? Now we are thinking about multistep pathways where we have enzymes working on substrates that they may or may not have seen in nature, and we’re combining them together in a different way so they’re all in one cell,” Prather says.

For some of the compounds Prather’s lab is working on, researchers know the natural pathway that microbes use to generate them, but want to improve on it. For others, they don’t know how the product is produced naturally and come up with their own synthesis by tinkering with existing genes and combining them in new ways.

Her lab is also developing new tools for engineering bacteria and regulating which genes get turned on and off at certain times.

“That part of the work fits nicely in the realm of synthetic biology, where we’re thinking about new ways of being very purposeful about designing systems and taking advantage of modularization and parts, to be able to have more precisely engineered systems,” Prather says.