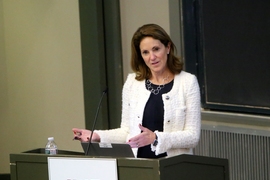 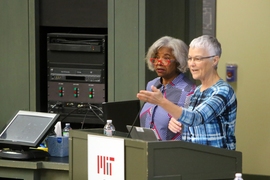 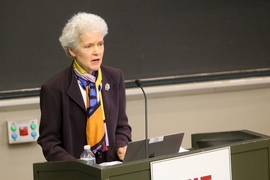 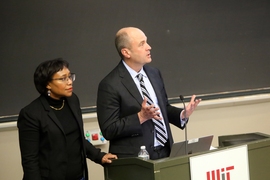 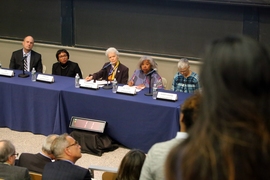 ↓ Download Image
Caption: All of the panelists took questions from the audience after their presentations.
Credits: Image: Allegra Boverman 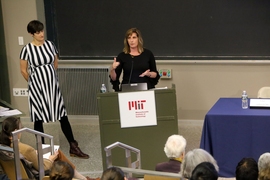 Caption:
Paula Hammond and Tim Jamison, co-chairs of the group on academic and organizational relationships, reported on their recommendations.
Credits:
Image: Allegra Boverman

Caption:
All of the panelists took questions from the audience after their presentations.
Credits:
Image: Allegra Boverman

At Tuesday’s “Community Forum on Preventing and Responding to Sexual Misconduct,” MIT faculty, students, and staff were briefed on results from the latest campus-wide survey on sexual misconduct at MIT. The forum also focused on the efforts of four working groups that have been exploring how the Institute can strengthen its work to prevent and respond to sexual misconduct.

As described in a letter to the MIT community from Chancellor Cynthia Barnhart and Provost Martin Schmidt, “these groups of faculty, students, staff, and postdocs have been reviewing our practices and making recommendations to foster a more inclusive, respectful, and equitable culture, specifically examining matters of leadership, policies, training, and the power imbalances in working and academic relationships.”

At the forum, the leaders of the four working groups summarized their findings and draft recommendations, and then addressed questions from the audience. MIT President L. Rafael Reif; Institute Professor Sheila Widnall, co-chair of the 2018 National Academies of Science, Engineering and Medicine Report on the sexual harassment of women in academia; and faculty leaders from across the Institute’s schools and departments attended.

In introducing the forum, Barnhart explained that in response to the National Academies report, Reif had established an advisory leadership board and four working groups to study the report’s recommendations and how best to put them into action. Now that the working groups’ reports have been made public, MIT is seeking comments and responses, both publicly through the forum and online through a commentary period that extends until Nov. 15. After that, this input will be incorporated into final reports, and an implementation plan will be developed. The reports and implementation plan will be issued to the MIT community in January.

Borrowing a metaphor from the National Academies report, Barnhart compared sexual harassment to an iceberg where certain actions are “less visible and beneath the waterline” but nevertheless contribute to an overall climate that creates uncomfortable working and learning situations for many people. Indeed, when students who experienced sexual harassment were asked why they did not contact a program or resource, about half indicated “Events like this seem common,” and about one-third said the reaction from people they told suggested their experience wasn’t serious enough to contact a program or service.

The broad survey of MIT undergraduate and graduate students found that about 40 percent of respondents had experienced at least one form of harassing behavior at the Institute. Under the definitions used in the survey, harassing behavior included belittling comments, crude sexual remarks or jokes, and unwanted touching or requests for sexual contact. When such behavior rises to the level of becoming severe or pervasive enough to interfere with a person’s performance or participation in academic activities, or creates an intimidating, hostile, or offensive environment, then it becomes “harassment.”

“To address sexual misconduct is also to address culture and climate issues more generally,” Barnhart said. “At MIT, we have to have solutions that resonate at the student level, solutions designed by and for our community.” Barnhart also noted the importance of initiatives receiving support and assistance from the central administration.

Leaders of the four working groups then discussed their work and findings. The working group on training and prevention, co-chaired by Sarah Rankin, director and Title IX coordinator, and Libby Mahaffy, diversity and inclusion specialist in Human Resources, described their efforts to make an inventory of MIT’s existing training programs, and attempts to benchmark their impact. Because MIT is a fairly siloed institution, “we recommended a greater alignment across the institute” in terms of antiharassment training programs, said Mahaffy.

That group also suggested that there should be annual training on issues of sexual misconduct and gender harassment, including for undergraduates, graduate students, faculty, and staff. For those who receive these trainings repeatedly, there should be “new topics, new training that would resonate with them,” Rankin said. Such trainings should be focused on existing groups, such as academic departments, dorms, or labs, so that they can provide mutual reinforcement of the lessons learned. The group also said there should be continuing assessments of the effectiveness of all the approaches being used to deal with these issues.

The working group on leadership and engagement, co-chaired by Alyce Johnson, special advisor to the provost, and Maryanne Kirkbride, executive administrator of MindHandHeart, said their group focused on increasing visibility around these issues, expanding leadership training and skill-building programs, and stressing the importance of effective communications. “How do we recognize and acknowledge” the places where positive work is being done to address harassment, and provide “consistent reinforcement” for those efforts, Johnson asked.

Kirkbride added that rather than just occasional specific communications about these issues, such messages should be included in all relevant speeches or letters from senior officials, stressing the fact that “reporting [of misbehavior] is honorable and courageous,” and needs to be encouraged at all levels. Kirkbride also said she would respond to a community member’s suggestion that trauma-informed leadership training be incorporated into the working group’s final report.

The working group on policies and reporting, chaired by Policy and Compliance Specialist Marianna Pierce and Assistant Provost Doreen Morris, “had very lively discussions,” for example about the language contained in MIT’s policies on personal conduct and harassment, and against retaliation, Pierce said. While there are good policy statements in place, in some cases the wording of the policies is not consistent between the student and faculty and staff policies, and sometimes the descriptions are too short and lack examples that would help people understand their relevance to particular situations and interactions, she said.

Pierce described an upcoming revision of the policy on how to handle complaints against faculty and staff, which will be effective at the beginning of the second semester. A new Institute Discrimination and Harassment Response Office will be responsible for investigating all complaints and issuing annual reports, including aggregate statistics regarding the outcomes of their investigations. At present, individuals who file complaints against faculty and staff are not told what actions resulted from the complaint, which has been frustrating to many of these complainants. It’s important to decide on procedures for “what should be disclosed, not only to the complainant, but in some circumstances” possibly also to a larger group, Pierce said. Disclosures about the results of complaints, she said, can “help to address a culture of silence” but must find the right balance between transparency and privacy.

The academic and organizational relationships working group, co-chaired by professors Paula Hammond and Tim Jamison, came up with a set of six overall recommendations for change. These included clear articulation of values, ongoing assessments of how programs to address these problems are actually working, accountability for those found to have violated policies, and “recognition of excellence,” Jamison said, which is important in order to “incentivize people to go beyond expectations,” and provides a means for an organization to reaffirm its values.

“We thought it was important to talk about the values we all share,” Hammond added. “It’s important for us to have cross-campus discussions” to develop clear statements of “what we think about our community interactions.” The report details many suggested actions, ranging from some that can be readily implemented to others that will take more time to develop. For example, one that could be adopted quickly is restructuring the format of thesis committee meetings to build in a slot of time for the student to meet with the committee without their advisor present, to make it easy for the student to articulate any issues relating to their relationship with that advisor.

The presentations were followed by a question-and-answer period, during which several students, faculty, and staff members made suggestions, raised issues and asked about the application of some of these policies and recommendations, including reporting data on complaints about students and faculty, and ensuring an appropriate response to complaints arising in the LGBTQ community. Other questions addressed hiring and promotions, and accounting for the time commitment involved in responding to complaints.

A question was asked about Professor Seth Lloyd, who accepted gifts from Jeffrey Epstein. Provost Martin Schmidt replied that leadership from Lloyd’s departments have reached out to support students currently enrolled in Lloyd’s class and that the concerns and needs of the students were being carefully monitored.

Barnhart concluded the forum by expressing appreciation to all community members for attending and offering their ideas and questions, and she thanked the co-chairs and working group members for their hard work. She encouraged community members to provide comments on the draft reports by Nov. 15.