Caption:
Becca Sholler examines a “bird plane” brought to class by course instructor Professor Daniel Frey to use as a reference for her team's final project.
Credits:
Photo: Jiani Zeng

Caption:
Daniel Frey, professor of mechanical engineering, shows students in class 2.00a a self-designed plane he built from a kite and some foam core.
Credits:
Photo: Jiani Zeng

Caption:
Naomi Michael examines a bird plane brought to class by Frey to use as a reference for her team's final project.
Credits:
Photo: Jiani Zeng

Many first-year students arriving on campus each year share a driving force that brought them to MIT — a passion for making. Whether it’s tinkering with robots, building motors, or designing devices, they are eager to create something tangible during their time at MIT. Typically, an engineering curriculum starts by introducing key concepts and fundamentals, delaying the act of creation until later in the undergraduate experience.

In class 2.00a (Fundamentals of Engineering Design: Explore Space, Sea and Earth) first-year students are tasked with designing and building their own machine so they can see first-hand how the fundamentals they are learning apply to real-world scenarios.

“A lot of students come to MIT motivated to actually creating something, but they might have to wait until junior or senior year in some cases,” explains Daniel Frey, professor of mechanical engineering. “I want to give them a chance to experience what it’s like to build and create in their first year.” 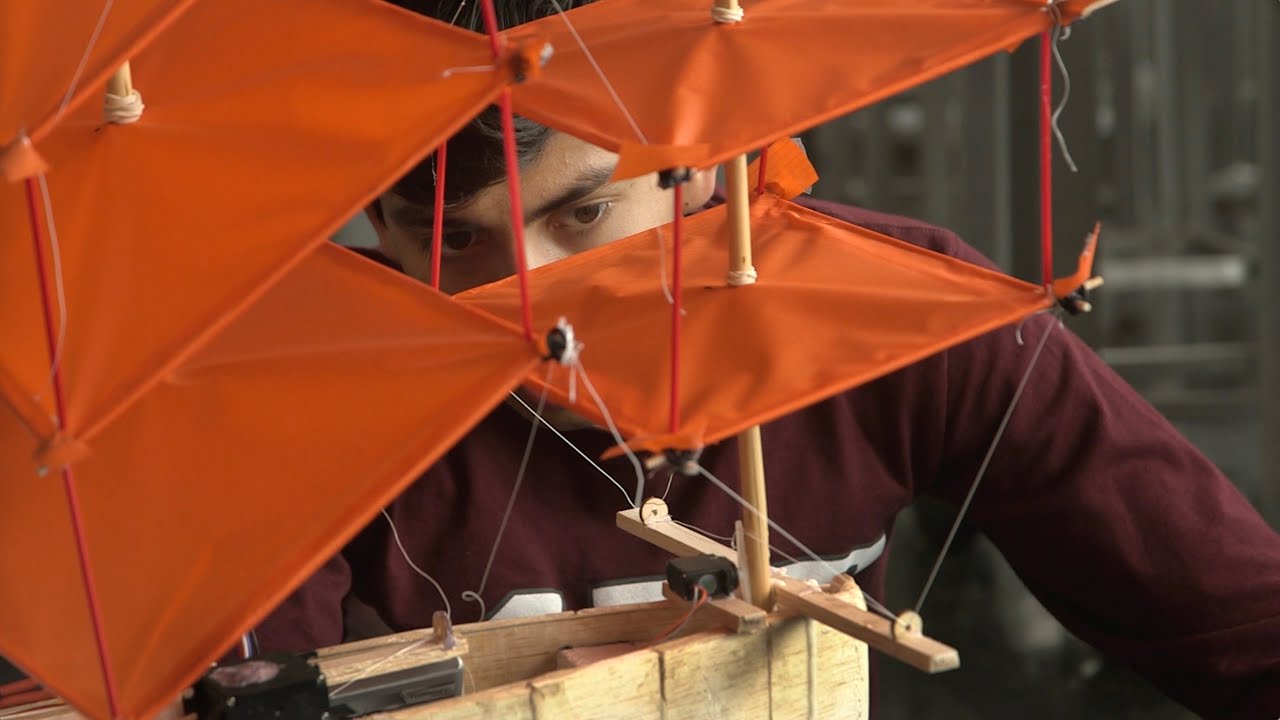 The course introduces students to key principles and themes in design and engineering. Students get a crash course in MATLAB and CAD programming like SolidWorks. They learn the fundamental principles that govern structures, controls, and mechanics. By the third week of the semester, they are divided into teams that work together to conceptualize, design, and build a machine.

“This class really forces you to dive into the deep-end of the pool and see what you can make,” says Jason Ramirez, a current sophomore studying mechanical engineering who took 2.00a last spring.

Each year, the item students are tasked with building changes. Every project has hinged upon one central theme: exploration. The subtitle for Course 2.00a is, after all, “Explore Space, Sea and Earth.”

In the past, projects included assessing the stability of a ship, using remote controlled aircrafts and robotic harvesters to clear watermilfoil growth in a lake, and searching for the existence of life on one of Jupiter’s moons.

On the surface, the theme of this year’s projects was quite simple. Students were charged with building something with the theme of "flying." The resulting projects, however, were anything but simple. “This particular year everyone was swinging for the fences. They were all really trying to do something ambitious,” recalls Frey.

This year’s projects included both a "butterfly plane" and a bird-shaped plane, complete with flapping wings. While these ambitious designs gave students experience in making, they also introduced them to something nearly every engineer experiences throughout their career: failure.

While most design courses taken later in a students’ academic career have the end-goal of a successful product, Frey and his teaching team see value in giving first-year students the room to fail.

“I think early enough in the sequence of design courses a student takes, there should be the option for students to go out on a limb, tackle a particularly hard project, and give it the ‘old college try,’” Frey says.

Ramirez’s team met failure a few times throughout the design process. “We definitely failed a lot, but I think that there is a lot of learning in that,” he says.

One of the many things the project instills in students is how to work with fellow students to achieve a goal. As student teams worked together on refining their designs, Frey and the staff at the MIT International Design Center helped guide students’ visions and assist in the operation of machinery.

Along with other first-year courses 2.00 (Introduction to Design) and 2.00b (Toy Product Design), the class is meant to give first-year students a taste of what studying mechanical engineering at MIT will be like.

“The classes 2.00, 2.00a, and 2.00b are like an advertisement, not just for the Department of Mechanical Engineering, but for the particular way we want students to learn which really embodies MIT’s motto ‘mens et manus,’” adds Frey.

Last spring, Naomi Michael entered the class unsure of what major she would declare at the end of the year. For her, 2.00a tipped the scales toward mechanical engineering.

“The class gave me a good framework for thinking about the rest of Course 2,” says Michael, who is now a sophomore studying mechanical engineering. “2.00a does a good job of giving you a foundation across a lot of different subjects you’ll encounter within mechanical engineering including statics, MATLAB, and CAD. While these fundamentals will be covered in greater depth in later classes, it’s nice to have some familiarity with what they are and what they can do.”

Course 2.00a has also armed Ramirez with a new perspective on how to approach the rest of his time at MIT. “The class showed me that MIT isn’t just about staying in your room working on p-sets at your desk,” he says. “You can get out, explore, and work on projects you actually care about.”

Scaling up a cleaner-burning alternative for cookstoves

Overcoming obstacles with an electric hovercraft

Robots shoot for the moon in MIT’s annual 2.007 competition