Fortifying the future of cryptography 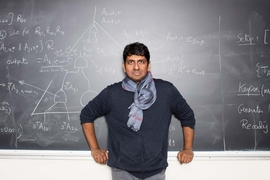 ↓ Download Image
Caption: Vinod Vaikuntanathan is using number theory and other mathematical concepts to fortify encryption so it can be used for new applications and stand up to even the toughest adversaries.
Credits: Image: Scott Brauer

Caption:
Vinod Vaikuntanathan is using number theory and other mathematical concepts to fortify encryption so it can be used for new applications and stand up to even the toughest adversaries.
Credits:
Image: Scott Brauer

As a boy growing up in a small South Indian village, Vinod Vaikuntanathan taught himself calculus by reading books his grandfather left lying around the house. Years later in college, he toiled away in the library studying number theory, which deals with the properties and relationships of numbers, primarily positive integers.

This field of study naturally steered Vaikuntanathan toward what he calls “the most important application of number theory in the modern world”: cryptography.

Today, Vaikuntanathan, a recently tenured associate professor of electrical engineering and computer science at MIT, is using number theory and other mathematical concepts to fortify encryption so it can be used for new applications and stand up to even the toughest adversaries.

One major focus is developing more efficient encryption techniques that can be scaled to do complex computations on large datasets. That means multiple parties can share data while ensuring the data remains private. For example, if researchers could analyze genomic data and patient data together, they may be able to identify key genome sequences associated with diseases. But the information for genomes and patients is kept private by separate entities, so collaboration is difficult. That’s a gap Vaikuntanathan wants to close.

“Data is available everywhere for these purposes, but it lives in silos. Better encryption is a way to ensure privacy yet allow the person holding the encrypted object to get something useful out of it,” Vaikuntanathan says. “Encrypting data and using data for a valuable purpose don’t have to be opposing constraints. You can achieve the best of both worlds sometimes.”

Part of his work also means “future-proofing” cryptography in a world that may soon see the rise of ultrafast quantum computers. Still in their infancy, quantum computers could one day provide breakthroughs in materials science, drug discovery, and artificial intelligence, to name just a few fields. But, because of their incredible speeds, they could also be used to break through most, if not all, today’s toughest cryptography schemes.

“All the existing encryption systems you use over the internet are insecure if you can build quantum computers,” Vaikuntanathan says. “This is something that everyone knows at this point. We need to develop other ways of doing cryptography to secure the internet so it stands strong, even in the face of quantum computers.”

Vaikuntanathan’s journey to cryptography, and to MIT, was a step-by-step process of following his academic interests to increasingly larger cities and institutes — and teaching himself along the way.

It started in Neyyattinkara, India, a place so small “you’d find it hard to locate on map,” Vaikuntanathan says. Today, he and his wife still disagree over whether to call it a town or village. But he’s adamant on the latter: “It doesn’t even have a shopping mall — that’s my criteria for calling it a village.”

By age 12, using his grandfather’s old texts, Vaikuntanathan had taught himself an admittedly incomplete understanding of calculus. “It was buggy and error-prone, but as you go along you get better teachers. The best thing one can do is teach oneself these notions, struggle at it — you’ll get it wrong — and then later be enlightened,” he says.

After attending his area’s only high school, Vaikuntanathan, at 15, joined a pre-university program at a technical institute in a nearby bigger city, Trivandrum, about 20 miles away, where he met like-minded classmates. “There weren’t many people who cared about math and science,” he says, “but a few of us banded together and learned advanced math by ourselves.” Of course, there were some disadvantages: “Twenty miles takes an hour in India traffic, on public bus, packed like sardines. Commuting there was not the most pleasant thing in the world.”

Two years later, Vaikuntanathan enrolled in the Indian Institute of Technology (IIT) Madras, in Chennai, a top engineering school in one of the country’s largest cities. “That’s where things started,” Vaikuntanathan says. As he had at his previous institute, Vaikuntanathan formed a “band of brothers” — a trio of students, including himself, who began studying cryptography.

Then, in his junior year, his professor gave him a copy of “Lecture Notes on Cryptography,” about 300 pages of printed-out, compiled notes from a course on cryptography taught at MIT by Shafi Goldwasser and Mihir Bellare. “Our professor gave it to us and said, ‘Go read it and don’t bother me for a year,’” Vaikuntanathan says.

Working with “giants in the field”

Vaikuntanathan sought to carry his interest in cryptography to graduate school. Accepted into MIT and the University of California at Berkeley, Vaikuntanathan recalls asking his father for advice on which to attend: “I showed him pictures from Google of Cambridge, and they’re the dead of winter, with the frozen Charles River; and then Berkeley, which was sunny and full of life. My father said, ‘Go to Berkeley,’ and I said, ‘No, I’m going to MIT.’ It was the obvious choice, because it’s where the giants in the field were.”

One of those giants was Goldwasser, who became a graduate studies advisor: “I learned from her books to begin with, so that was quite fantastic.”

Some of his major MIT work revolved around reinforcing cryptography against the coming age of quantum computing. This involved using lattices, an architecture that uses number theory and hides data inside very complex math problems that even quantum computers can’t crack. His PhD studies culminated in co-inventing lattice-based cryptography schemes; he also developed a toolkit to teach others how to build and modify those schemes, along with former classmate and mentor Chris Peikert and Stanford University’s Craig Gentry.

After earning his PhD, Vaikuntanathan worked briefly as a researcher at IBM and Microsoft. During that time, Gentry invented fully homomorphic encryption, “which changed the world for all of us” working in cryptography, Vaikuntanathan says. But the original model was too computationally expensive to be practical. “For a while, fully homomorphic encryption was nice for cryptography kids to play with, but was useless otherwise,” he says.

In the late 2000s Vaikuntanathan, together with Gentry and Zvika Brakerski of the Weizmann Institute of Science, integrated lattices into fully homomorphic encryption techniques, creating a model that achieved far better security and efficiency. Other researchers have since built on top of the model, which is freely available on Github as BGV (Brakerski-Gentry-Vaikuntanathan). “People have refined that system again and again,” Vaikuntanathan says. “It’s interesting to see how far it’s come in nearly 10 years.”

Vaikuntanathan then taught for a couple years at the University of Toronto. During a summer as a visiting researcher at MIT, however, knew he had to return. “I knew this place had people with boundless energy, creativity, enthusiasm, and optimism,” he says. “It drew me back.”

Vaikuntanathan started teaching at MIT in 2013. Two years ago, he co-founded a startup, Duality Technologies, with Goldwasser and others to develop cryptography technologies that enable users to carry out complex computations and analytics on encrypted data. To Vaikuntanathan, the startup represents how the mathematical concepts he delved into all those years ago have come to fruition.

“It’s exciting to see the transition from abstract number theory into these very concrete applications,” he says.

The tenured engineers of 2018