Learning to study a painful past 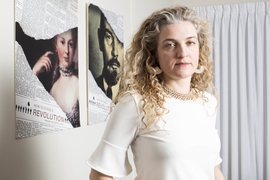 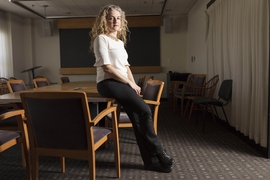 If you ask MIT Associate Professor Lerna Ekmekçioğlu how she wound up in academia, she has a straightforward answer.

“I was born a historian,” Ekmekçioğlu says. “It was my destiny.”

That natural affinity for history has propelled her through the ranks of academia, as a pioneering scholar of Armenians in Turkey, including Armenian women. Her specialty is a complex topic involving a historical catastrophe: the role of women in society after the 1915 Armenian genocide.

More specifically, Ekmekçioğlu studies how Armenian women helped keep their community intact, even while transforming it by introducing feminist ideas. Her best-known book, “Recovering Armenia: The Limits of Belonging in Post-Genocide Turkey,” published in 2016 by Stanford University Press, reconstructs the life of the community of survivors, including its feminist voices, in the first decades after World War I.

Ekmekçioğlu’s basic interest in this subject is not hard to account for. She grew up in Istanbul, Turkey, as part of the small Armenian community remaining there over the decades. In this sense, Ekmekçioğlu really was born to be an Armenian historian. Understanding the world she grew up in meant understanding its past.

“I always had a curiosity about Armenian history,” Ekmekçioğlu notes. Still, it is a big leap from personal curiosity to a sustained career. And, as she recounts it, “I did not have any role models, really,” in academia, because there was so little work about what she wanted to study.

For this reason, Ekmekçioğlu’s career has two layers. One is her research and teaching — for which Ekmekçioğlu was awarded tenure at MIT last year.

The other is the extensive effort she has made to disseminate Armenian history to other students. Ekmekçioğlu is currently working on multiple projects at MIT to make Armenian historical materials widely available, and thus to create conditions in which today’s students and future researchers and historians can readily study the subject.

“I almost feel it as a responsibility,” Ekmekçioğlu says. “I see this as a public service.”

To see why this matters to Ekmekçioğlu, consider the circumstances in which she first started studying Armenian history and Armenian feminism, as an undergraduate at Bogazici University in Istanbul. The basic problem Ekmekçioğlu encountered: There weren’t established courses about Armenians, let alone Armenian women, at the university. Teaching Armenian history, to this day, remains a punishable crime in Turkey.

So Ekmekçioğlu and a few other students founded reading groups to study Armenian history and share information about written sources and materials that pertained to Armenian women. Together, a few of them entered a research paper competition, for all fields of history‚ and finished third.

That was enough to help Ekmekçioğlu and her friends gain more support from professors, who encouraged them to keep pursuing the subject. And they have: One of Ekmekçioğlu’s undergraduate friends was Melissa Bilal, now a faculty member at the American University of Armenia, in Yerevan, Armenia, with whom Ekmekçioğlu still collaborates on research and pedagogical projects.

As an undergraduate, Ekmekçioğlu also spent a year abroad at the University of Athens before graduating from Bogazici University in 2002. She then attended New York University as a graduate student, receiving her MA in 2004 and her PhD in 2010. After a year as a postdoc at the University of Michigan, Ekmekçioğlu joined the MIT faculty in 2011. Today she is the McMillan-Stewart Associate Professor of History at the Institute, and is affiliated with MIT’s Women’s and Gender Studies program and the Center for International Studies.

Ekmekçioğlu’s work examines a psychological and social strain at the heart of the lives of many Armenian women. After a shocking, traumatic human catastrophe, they were simultaneously trying to push their society forward, by developing new norms and rights for women, while also trying to hold their fractured community together by maintaining the cultural traditions of the past.

“By definition, they had to change,” Ekmekçioğlu says. “But that goal is in tension with maintaining Armenian tradition.”

In her book, Ekmekçioğlu’s work cleverly draws on written sources, such as an overlooked Armenian magazine called Hay Gin, to draw out the thoughts of the women she studies. More broadly, she has collaborated with Bilal to both publish and analyze an array of original-source documents about Armenian women, ranging in time from the 1860s to the 1960s.

When Ekmekçioğlu was still in graduate school, she and Bilal co-edited the first such volume on the subject, published in Istanbul in 2006 and translated as, “A Cry for Justice: Five Armenian Feminist Writers from the Ottoman Empire to the Turkish Republic.” Today, she and Bilal are working on a more comprehensive volume for publication, to be published in English as well as the original languages, with the working project title, “Feminism in Armenian: An Interpretive Anthology and Digital Archive.”

One component of this will be a volume combining original primary-source writings and scholarly essays, meant to make the ideas of Armenians a more easily accessible part of mainstream women’s history, and intended for classroom use.

Moreover, as the title suggests, Ekmekçioğlu and Bilal are working on a digital component of the project, which is intended to be the most comprehensive set of source materials on the subject yet in existence. She credits MIT as one of the institutions that has made this kind of project possible; she also recently received a Mellon Faculty Grant of the Center for Art, Science, and Technology, for a related public exhibition on the subject.

“There is a lot of curation involved in this,” Ekmekciouglu says. “I’ve had a lot of support at MIT.”

While Ekmekçioğlu is a leading historian of the early Turkish Republic in general,  most of her work has come with the clear purpose of calling attention to overlooked women who, in exceedingly difficult times, sought to keep their society alive.

“It’s only fair to those women who worked so hard, to do that,” Ekemkcioglu says.

The task of history