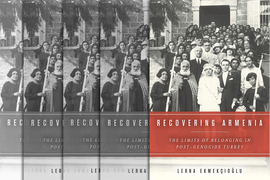 In 1919, an Istanbul resident named Hayganush Mark did something remarkable: She started a magazine. Today, that might not sound extraordinary. But Mark was Armenian. Hundreds of thousands of Armenians had just been massacred as members of a religious and ethnic minority in the Ottoman Empire, and Armenians were still fleeing in the years after 1915.

Mark’s publication, Hay Gin, gave voice to an endangered group — and it kept appearing until 1933, when the Turkish government shut it down.

Moreover, Hay Gin featured feminist perspectives on work, marriage, and politics, which were not exactly common at the time. In publishing the journal, Mark was engaged in an act of political courage, while providing a guide about “how to be an Armenian in post-genocide Turkey,” as MIT historian Lerna Ekmekcioglu writes in a unique new book on the subject.

The small community of Armenians who stayed in Turkey, mostly in Istanbul, had to find their way forward during a period of emotional trauma, continued discrimination, and political upheaval (the Republic of Turkey was founded in 1923). And many of those people faced an enduring tension: They wanted to modernize society and press for political change, while acknowledging a desire to keep social customs and traditional arrangements intact, as a way of preserving the existentially threatened Armenian community.

“I try to show how the story unfolds for [those] Armenians,” says Ekmekcioglu, who is the McMillan-Stewart Associate Professor of History at MIT and an affiliate of the Women’s and Gender Studies Program at MIT. “They had to or chose to live inside Turkey, alongside the perpetrators. What did they do to make it work for them? How did they adjust to these conditions?”

A brief “exceptional period” of hope

Ekmekcioglu’s book, “Recovering Armenia: The Limits of Belonging in Post-Genocide Turkey,” published this week by Stanford University Press, is the first in-depth history of the Armenians who stayed in Turkey in the immediate aftermath of World War I. At the close of the war, Armenians looked to the victorious Allies to help them carve out a state for Turkish Armenians that would be contiguous with the existing state of Armenia. They wanted a safe haven for the remaining people in their nation, established in what they considered their historic homeland. For a while, their hopes were high, as the victorious Allied powers voiced support for their goals.

Ekmekcioglu terms the years from 1918 to 1922 an “exceptional period” in the history of Armenians in Turkey, the one time they expected the full rights they did not have under the Ottomans. “Only in this period can they [Armenians] feel free, say what they want to say, and have demands,” she notes.

But when the Allies lost interest in Armenian statehood, those claims rebounded against the Armenians, who were accused of seeking to undermine the nascent Turkish state.

So Armenians again had to live in the Republic of Turkey as an officially designated non-Muslim minority group, with full legal rights as Turkish citizens but in practice enduring significant institutional and individual discrimination. Ekmekcioglu contends that even though Armenians were unwanted by the state and the majority population, Turkey was still very much a livable place, not only because it was the long-time home of the local Armenians, but also because the country was changing in this period. Turkey became officially secular, which eased some pressure on Armenians, who had freedom of religion, language, and various educational rights. The official day of rest even shifted from Friday to Sunday.

“It makes Armenians’ lives easier because they can fit in more easily,” Ekmekcioglu observes. “It helps them imagine the future can materialize for them in Turkey.”

By using Hayganush Mark and Hay Gin as a window into Armenian society at the time, Ekmekcioglu’s book carefully focuses on the role of women in the forging of modern Armenian identity in Turkey. Here Mark’s writing and editorial hand reveal a series of nuances. She believed women should have public roles, be free to work, and keep their own names after marriage. On the other hand, Mark realized that other women, and certainly many Armenian men, might disagree or be ambivalent about changes in traditional gender roles, and so Hay Gin featured articles about fashion, etiquette, cooking, and other traditional, domestic women’s topics.

“She calculated that Armenians as a community were not ready for radical feminism,” Ekmekcioglu says, adding that Mark and her circle “accepted traditional, normative womanhood. But they also thought everyone should have voices, in the way their group is governed, and in the way their future is imagined.”

Or, in an idiomatic Armenian phrase Ekmekcioglu can recite, Mark’s dual roles meant that “the pen, the ladle, and the needle always were by her side.” The surface domesticity of Hay Gin also kept the magazine underneath the radar of government censors, at least until 1933. Yet religious leaders in the Armenian community, as Ekmekcioglu details, were also wary of Mark’s ideas: What would become of Armenians if their women became too fully integrated into broader Turkish society? For all of the exceptional problems Armenians faced, this is a classic quandary of assimilation.

“This kind of opening up to the world comes with consequences,” Ekmekcioglu says.

Other scholars have praised “Recovering Armenia.” Khachig Tölölyan, director of the College of Letters at Wesleyan University, calls it a “remarkably innovative history,” and “a pioneering work that will prove indispensable."

The issues Ekmekcioglu examines are only now beginning to find a wider hearing in Turkey. As Ekmekcioglu points out in the book, ethnic Armenians such as herself are still not permitted to teach in certain types of schools in Turkey, and they believe they have long been misrepresented in accounts of the nation’s past.

“The version of history I received at school and what I learned at home were really the opposite of one another,” Ekmekcioglu says. “I come from a family who talked about these things. There are many families who didn’t. There was a conscious effort to keep this memory alive for us.”

On the other hand, the 100th anniversary of the genocide’s beginning has sparked an unprecedented level of discussion of it in Turkey, Ekmekcioglu believes. Along with that has come a greater frankness about what happened and about the ongoing Armenian presence in the country.