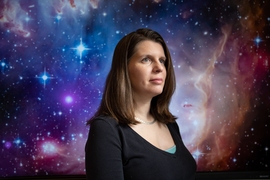 In August 2002, Anna Frebel pressed pause on her undergraduate physics studies in Germany and spent her entire life savings on a plane ticket to take her halfway around the world, to a mountaintop observatory just outside Canberra, Australia.

She spent the next five months volunteering at the Australian National University Research School of Astronomy and Astrophysics, where astronomers had regular access to a set of world-class telescopes set atop Mount Stromlo.

On Jan. 18, 2003, brushfires that had been burning for weeks in the surrounding forest suddenly advanced toward Canberra, whipped up by a dry, scorching wind.

“The fire front just swept in, and it marched at about six to seven miles an hour, and it just rode right into the city. The observatory was the first to fall,” recalls Frebel, who watched the calamity from the opposite end of Canberra.

The fires obliterated the observatory’s historic telescopes, along with several administrative buildings and even some homes of researchers living on the mountainside.

“It was a pretty big shock,” Frebel says. “But tragedy also brings out community, and we were all helping each other, and it really bonded us together.”

As the campus set to work clearing the ash and rebuilding the facility, Frebel decided to extend her initially one-year visit to Australia — a decision that turned out to be career-making.

“I wasn’t going to be deterred by a burned-down observatory,” says Frebel, who was granted a tenure position this year in MIT’s Department of Physics.

Soon after the fires subsided, Frebel accepted an offer by the Australian National University to pursue a PhD in astronomy. She chose to focus her studies on a then-fledgling field: the search for the universe’s oldest stars.

It’s believed that, immediately after the Big Bang exploded the universe into existence, clouds of hydrogen, helium, and lithium coalesced to form the very first generation of stars. These incredibly massive stellar pioneers grew out of control and quickly burned out as supernovas.

To sustain their enormous luminosities, atoms of hydrogen and helium smashed together to create heavier elements in their cores, considered to be the universe’s first “metals” — a term in astronomy used to describe all elements that are heavier than hydrogen and helium. These metals in turn forged the second generation of stars, which researchers believe formed just half a billion years after the Big Bang.

Since then, many stellar generations have populated the night sky, containing ever more abundant metals. Astronomers suspect, however, that those early, second-generation stars can still be found in some pockets of the universe, and possibly even in our own Milky Way.

Frebel set out to find these oldest stars, also known as “metal-poor” stars. One of her first discoveries was HE 1327-2326, which contained the smallest amount of iron ever known, estimated at about 1/400,000 that of the Earth’s sun. Given this extremely low “metallicity,” the star was likely a second-generation star, born very shortly after the Big Bang. Until 2014, Frebel’s star remained the record-holder for the most metal-poor star ever discovered.

The results were published in 2005 in Nature, with Frebel, then just two years into her PhD, as lead author.

Frebel went on to work as a postdoc at the University of Texas at Austin, and later the Harvard-Smithsonian Center for Astrophysics, where she continued to make remarkable insights into the early universe. Most notably, in 2007, she discovered HE 1523-0901, a red giant star in the Milky Way galaxy. Frebel estimated the star to be about 13.2 billion years old — among the oldest stars ever discovered and nearly as old as the universe itself.

In 2010, she unearthed a similarly primitive star in a nearby galaxy, that appeared to have the exact same metallic content as some of the old stars she had observed in the outskirts of our own Milky Way. This seemed to suggest, for the first time, that young galaxies like the Milky Way may “cannibalize” nearby, older galaxies, taking in their ancient stars as their own.

“A lot more detail has come to light in the last 10 years or so, and now we’re asking questions like, not just whether these objects are out there, but exactly where did they form, and how,” Frebel says. “So the puzzle is filling in.”

In 2012, she accepted an offer to join the physics faculty at MIT, where she continues to assemble the pieces to the early universe’s history. Much of her research is focused on analyzing stellar observations taken by the twin Magellan telescopes at the Las Campanas Observatory, in Chile. Frebel’s group makes the long trek to the observatory about three times per year to collect light from stars in the Milky Way and small satellite dwarf galaxies.

Once they arrive at the mountaintop observatory, the astronomers adapt to a night owl’s schedule, sleeping through the day and rising close to dinner time. Then, they grab a quick bite at the observatory’s lodge before heading up the mountainside to one of the two telescopes, where they remain into the early morning hours, collecting streams of photons from various stars of interest.

On nights when bad weather makes data collection impossible, Frebel reviews her data or she writes — about the solitary, sleep-deprived experience of observatory work; the broader search for the universe’s oldest stars; and most recently, about an overlooked scientific heroine in nuclear physics.

Engaging with the public

In addition to her academic work, Frebel makes a point of reaching out to a broader audience, to share her excitement in the cosmos. In one of many essays that she’s penned for such popular magazines as Scientific American, she describes the satisfied weariness following a long night’s work:

“Already I am imagining myself drawing the thick, sun-proof shades on my window and resting my head against my pillow. The morning twilight cloaks the stars overhead, but I know they are there — burning as they have for billions of years.”

In 2015, she published her first book, “Searching for the Oldest Stars: Ancient Relics from the Early Universe.” And just last year, she wrote and performed a 12-minute play about the life and accomplishments of Lise Meitner, an Austrian-Swedish physicist who was instrumental in discovering nuclear fission. Meitner, who worked for most of her career in Berlin, Germany, fled to Sweden during the Nazi occupation. There, she and her long-time collaborator Otto Hahn found evidence of nuclear fission. But it was Hahn who ultimately received the Nobel Prize for the discovery.

“Scientifically, [Meitner] is absolutely in line with Marie Curie, but she was never recognized appropriately for her work,” Frebel says. “She should be a household name, but she isn’t. So I find it very important to help rectify that.”

Frebel has given a handful of performances of the play, during which she appears in the first half, dressed in costume as Meitner. In the second half, she appears as herself, explaining to the audience how Meitner’s revelations influence astronomers’ work today.

Getting into character is nothing new for Frebel, who, as a high school student in Gottingen, Germany, took on multiple roles in the school plays. She also took part in what she calls the “subculture of figure-rollerskating” — a competitive sport that is analogous to figure-skating, only on roller skates. During that formative time, Frebel partly credits her mother for turning her focus to science and to the women who advanced their fields.

“When I was a teenager, my mom gave me a lot of biographies of women scientists and other notable women, and I still have a little book of Lise Meitner from when I was around 13,” Frebel says. “So I have been very familiar with her, and I do work basically on the topic that she was interested in. So I’m one of her scientific daughters.”

Meet the School of Science’s tenured professors for 2018