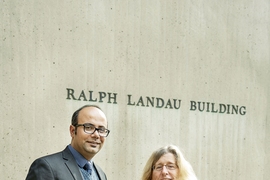 Caption:
Illustration shows the apparatus used to create a thin layer of a transparent, electrically conductive material, to protect solar cells or other devices. The chemicals used to produce the layer, shown in tubes at left, are introduced into a vacuum chamber where they deposit a layer on a substrate material at top of the chamber.
Credits:
Illustration courtesy of the authors, edited by MIT News

MIT researchers have improved on a transparent, conductive coating material, producing a tenfold gain in its electrical conductivity. When incorporated into a type of high-efficiency solar cell, the material increased the cell’s efficiency and stability.

The new findings are reported today in the journal Science Advances, in a paper by MIT postdoc Meysam Heydari Gharahcheshmeh, professors Karen Gleason and Jing Kong, and three others.

“The goal is to find a material that is electrically conductive as well as transparent,” Gleason explains, which would be “useful in a range of applications, including touch screens and solar cells.” The material most widely used today for such purposes is known as ITO, for indium titanium oxide, but that material is quite brittle and can crack after a period of use, she says.

Gleason and her co-researchers improved a flexible version of a transparent, conductive material two years ago and published their findings, but this material still fell well short of matching ITO’s combination of high optical transparency and electrical conductivity. The new, more ordered material, she says, is more than 10 times better than the previous version.

The combined transparency and conductivity is measured in units of Siemens per centimeter. ITO ranges from 6,000 to 10,000, and though nobody expected a new material to match those numbers, the goal of the research was to find a material that could reach at least a value of 35. The earlier publication exceeded that by demonstrating a value of 50, and the new material has leapfrogged that result, now clocking in at 3,000; the team is still working on fine-tuning the process to raise that further.

The high-performing flexible material, an organic polymer known as PEDOT, is deposited in an ultrathin layer just a few nanometers thick, using a process called oxidative chemical vapor deposition (oCVD). This process results in a layer where the structure of the tiny crystals that form the polymer are all perfectly aligned horizontally, giving the material its high conductivity. Additionally, the oCVD method can decrease the stacking distance between polymer chains within the crystallites, which also enhances electrical conductivity.

To demonstrate the material’s potential usefulness, the team incorporated a layer of the highly aligned PEDOT into a perovskite-based solar cell. Such cells are considered a very promising alternative to silicon because of their high efficiency and ease of manufacture, but their lack of durability has been a major drawback. With the new oCVD aligned PEDOT, the perovskite’s efficiency improved and its stability doubled.

In the initial tests, the oCVD layer was applied to substrates that were 6 inches in diameter, but the process could be applied directly to a large-scale, roll-to-roll industrial scale manufacturing process, Heydari Gharahcheshmeh says. “It’s now easy to adapt for industrial scale-up,” he says. That’s facilitated by the fact that the coating can be processed at 140 degrees Celsius — a much lower temperature than alternative materials require.

The oCVD PEDOT is a mild, single-step process, enabling direct deposition onto plastic substrates, as desired for flexible solar cells and displays. In contrast, the aggressive growth conditions of many other transparent conductive materials require an initial deposition on a different, more robust substrate, followed by complex processes to lift off the layer and transfer it to plastic.

Because the material is made by a dry vapor deposition process, the thin layers produced can follow even the finest contours of a surface, coating them all evenly, which could be useful in some applications. For example, it could be coated onto fabric and cover each fiber but still allow the fabric to breathe.

The team still needs to demonstrate the system at larger scales and prove its stability over longer periods and under different conditions, so the research is ongoing. But “there’s no technical barrier to moving this forward. It’s really just a matter of who will invest to take it to market,” Gleason says.