Is there dark matter at the center of the Milky Way?

A new analysis puts dark matter back in the game as a possible source of energy excess at the galactic center.
Jennifer Chu | MIT News Office
Publication Date:
Press Inquiries 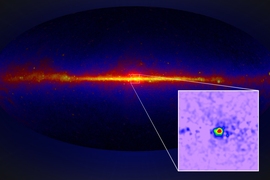 ↓ Download Image
Caption: A map of gamma ray emissions throughout the Milky Way galaxy, based on observations from the Fermi Gamma-ray Space Telescope. The inset depicts the Galactic Center Excess – an unexpected, spherical region of gamma ray emissions at the center of our galaxy, of unknown origin.
Credits: Credit: NASA/T. Linden, U.Chicago

Caption:
A map of gamma ray emissions throughout the Milky Way galaxy, based on observations from the Fermi Gamma-ray Space Telescope. The inset depicts the Galactic Center Excess – an unexpected, spherical region of gamma ray emissions at the center of our galaxy, of unknown origin.
Credits:
Credit: NASA/T. Linden, U.Chicago

MIT physicists are reigniting the possibility, which they previously had snuffed out, that a bright burst of gamma rays at the center of our galaxy may be the result of dark matter after all.

For years, physicists have known of a mysterious surplus of energy at the Milky Way’s center, in the form of gamma rays — the most energetic waves in the electromagnetic spectrum. These rays are typically produced by the hottest, most extreme objects in the universe, such as supernovae and pulsars.

Gamma rays are found across the disk of the Milky Way, and for the most part physicists understand their sources. But there is a glow of gamma rays at the Milky Way’s center, known as the galactic center excess, or GCE, with properties that are difficult for physicists to explain given what they know about the distribution of stars and gas in the galaxy.

There are two leading possibilities for what may be producing this excess: a population of high-energy, rapidly rotating neutron stars known as pulsars, or, more enticingly, a concentrated cloud of dark matter, colliding with itself to produce a glut of gamma rays.

In 2015, an MIT-Princeton University team, including associate professor of physics Tracy Slatyer and postdocs Benjamin Safdi and Wei Xue, came down in favor of pulsars. The researchers had analyzed observations of the galactic center taken by the Fermi Gamma-ray Space Telescope, using a “background model” that they developed to describe all the particle interactions in the galaxy that could produce gamma rays. They concluded, rather definitively, that the GCE was most likely a result of pulsars, and not dark matter.

However, in new work, led by MIT postdoc Rebecca Leane, Slatyer has since reassessed this claim. In trying to better understand the 2015 analytical method, Slatyer and Leane found that the model they used could in fact be “tricked” to produce the wrong result. Specifically, the researchers ran the model on actual Fermi observations, as the MIT-Princeton team did in 2015, but this time they added a fake extra signal of dark matter. They found that the model failed to pick up this fake signal, and even as they turned the signal up, the model continued to assume pulsars were at the heart of the excess.

The results, published today in the journal Physical Review Letters, highlight a “mismodeling effect” in the 2015 analysis and reopen what many had thought was a closed case.

“It’s exciting in that we thought we had eliminated the possibility that this is dark matter,” Slatyer says. “But now there’s a loophole, a systematic error in the claim we made. It reopens the door for the signal to be coming from dark matter.”

While the Milky Way galaxy more or less resembles a flat disk in space, the excess of gamma rays at its center occupies a more spherical region, extending about 5,000 light years in every direction from the galactic center.

In their 2015 study, Slatyer and her colleagues developed a method to determine whether the profile of this spherical region is smooth or “grainy.” They reasoned that, if pulsars are the source of the gamma ray excess, and these pulsars are relatively bright, the gamma rays they emit should inhabit a spherical region that, when imaged, looks grainy, with dark gaps between the bright spots where the pulsars sit.

If, however, dark matter is the source of the gamma ray excess, the spherical region should look smooth: “Every line of sight toward the galactic center probably has dark matter particles, so I shouldn’t see any gaps or cold spots in the signal,” Slatyer explains.

She and her team used a background model of all the matter and gas in the galaxy, and all the particle interactions that could occur to produce gamma rays. They considered models for the GCE’s spherical region that were grainy on one hand or smooth on the other, and devised a statistical method to tell the difference between them. They then fed into the model actual observations of the spherical region, taken by the Fermi telescope, and looked to see if these observations fit more with a smooth or grainy profile.

“We saw it was 100 percent grainy, and so we said, ‘oh, dark matter can’t do that, so it must be something else,’” Slatyer recalls. “My hope was that this would be just the first of many studies of the galactic center region using similar techniques. But by 2018, the main cross-checks of the method were still the ones we’d done in 2015, which made me pretty nervous that we might have missed something.”

After arriving at MIT in 2017, Leane became interested in analyzing gamma-ray data. Slatyer suggested they try to test the robustness of the statistical method used in 2015, to develop a deeper understanding of the result. The two researchers asked the difficult question: Under what circumstances would their method break down? If the method withstood interrogation, they could be confident in the original 2015 result. If, however, they discovered scenarios in which the method collapsed, it would suggest something was amiss with their approach, and perhaps dark matter could still be at the center of the gamma ray excess.

Leane and Slatyer repeated the approach of the MIT-Princeton team from 2015, but instead of feeding into the model Fermi data, the researchers essentially drew up a fake map of the sky, including a signal of dark matter, and pulsars that were not associated with the gamma ray excess. They fed this map into the model and found that, despite there being a dark matter signal within the spherical region, the model concluded this region was most likely grainy and therefore dominated by pulsars. This was the first clue, Slatyer says, that their method “wasn’t foolproof.”

At a conference to present their results thus far, Leane entertained a question from a colleague: What if she added a fake signal of dark matter that was combined with real observations, rather than with a fake background map?

The team took up the challenge, feeding the model with data from the Fermi telescope, along with a fake signal of dark matter. Despite the deliberate plant, their statistical analysis again missed the dark matter signal and returned a grainy, pulsar-like picture. Even when they turned up the dark matter signal to four times the size of the actual gamma ray excess, their method failed to see it.

“By that stage, I was pretty excited, because I knew the implications were very big — it meant that the dark matter explanation was back on the table,” Leane says.

She and Slatyer are working to better understand the bias in their approach, and hope to tune out this bias in the future.

“If it’s really dark matter, this would be the first evidence of dark matter interacting with visible matter through forces other than gravity,” Leane says. “The nature of dark matter is one of the biggest open questions in physics at the moment. Identifying this signal as dark matter may allow us to finally expose the fundamental identity of dark matter. No matter what the excess turns out to be, we will learn something new about the universe.”

MIT researchers have found that dark matter may be the source of the gamma rays found at the center of our galaxy, reports Ryan Mandelbaum for Gizmodo. “If it turns out that the signal is dark matter, that’s huge for our understanding of the universe,” explains postdoctoral associate Rebecca Leane.

Boston Globe reporter Maria Lovato writes that MIT scientists have uncovered evidence that a mysterious burst of light at the center of the Milk Way may be caused by dark matter. The findings could allow astronomers “to get a better look at dark matter, its properties, and what it’s made of,” Lovato explains.

This is how a “fuzzy” universe may have looked