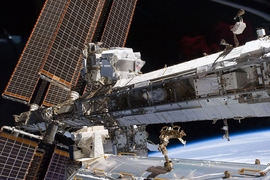 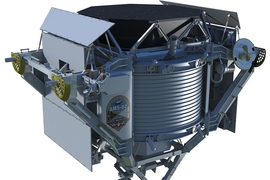 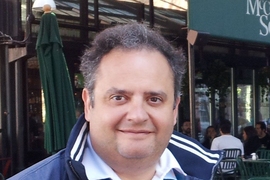 Researchers at MIT’s Laboratory for Nuclear Science have released new measurements that promise to shed light on the origin of dark matter.

The MIT group leads an international collaboration of scientists that analyzed two and a half years’ worth of data taken by the Alpha Magnetic Spectrometer (AMS) — a large particle detector mounted on the exterior of the International Space Station — that captures incoming cosmic rays from all over the galaxy.

An excess of these particles has been observed by previous experiments — suggesting that they may not originate from cosmic rays, but come instead from a new source. In 2013, the AMS collaboration, for the first time, accurately measured the onset of this excess.

The new AMS results may ultimately help scientists narrow in on the origin and features of dark matter — whose collisions may give rise to positrons.

The team reports that this is the first experimental observation of the positron fraction maximum — at 243 to 307 gigaelectronvolts (GeV) — after half a century of cosmic ray experiments.

“The new AMS results show unambiguously that a new source of positrons is active in the galaxy,” says Paolo Zuccon, an assistant professor of physics at MIT. “We do not know yet if these positrons are coming from dark matter collisions, or from astrophysical sources such as pulsars. But measurements are underway by AMS that may discriminate between the two hypotheses.”

The new measurements, Zuccon adds, are compatible with a dark matter particle with mass on the order of 1 teraelectronvolt (TeV) — about 1,000 times the mass of a proton.

Zuccon and his colleagues, including AMS’s principal investigator, Samuel Ting, the Thomas D. Cabot Professor of Physics at MIT, detail their results in two papers published today in the journal Physical Review Letters and in a third, forthcoming publication.

Nearly 85 percent of the universe is made of dark matter — matter that somehow does not emit or reflect light, and is therefore invisible to modern telescopes. For decades, astronomers have observed only the effects of dark matter, in the form of mysterious gravitational forces that seem to hold together clusters of galaxy that would otherwise fly apart. Such observations eventually led to the theory of an invisible, stabilizing source of gravitational mass, or dark matter.

The AMS experiment aboard the International Space Station aims to identify the origins of dark matter. The detector takes in a constant flux of cosmic rays, which Zuccon describes as “streams of the universe that bring with them everything they can catch around the galaxy.”

According to theoretical predictions, when two dark matter particles collide, they annihilate, releasing a certain amount of energy that depends on the mass of the original particles. When the particles annihilate, they produce ordinary particles that eventually decay into stable particles, including electrons, protons, antiprotons, and positrons.

As the visible matter in the universe consists of protons and electrons, the researchers reasoned that the contribution of these same particles from dark matter collisions would be negligible. However, positrons and antiprotons are much rarer in the universe; any detection of these particles above the very small expected background would likely come from a new source. The features of this excess — and in particular its onset, maximum position, and offset — will help scientists determine whether positrons arise from astrophysical sources such as pulsars, or from dark matter.

After continuously collecting data since 2011, the AMS team analyzed 41 billion incoming particles and identified 10 million positrons and electrons with energies ranging from 0.5 to 500 GeV — a wider energy range than previously measured.

The researchers studied the positron fraction versus energy, and found an excess of positrons starting at lower energies (8 GeV), suggesting a source for the particles other than the cosmic rays themselves. The positron fraction then slowed and peaked at 275 GeV, indicating that the data may be compatible with a dark matter source of positrons.

“Dark matter is there,” Zuccon says. “We just don’t know what it is. AMS has the possibility to shine a light on its features. We see some hint now, and it is within our possibility to say if that hint is true.”

If it turns out that the AMS results are due to dark matter, the experiment could establish that dark matter is a new kind of particle, says Barry Barish, a professor emeritus of physics and high-energy physics at the California Institute of Technology.

“The new phenomena could be evidence for the long-sought dark matter in the universe, or it could be due to some other equally exciting new science,” says Barish, who was not involved in the experiments. “In either case, the observation in itself is what is exciting; the scientific explanation will come with further experimentation.”

Kathryn Jepsen of Symmetry writes that new results from the AMS experiment, an international collaboration led by MIT Prof. Samuel Ting, indicate the detection of dark matter may be within reach. “It’s really profound to me, the fact that we’re getting this fundamental data,” said NASA Chief Scientist Ellen Stofan. “Once we understand it, it could change how we see the universe.”

Scientists behind the Alpha Magnetic Spectrometer experiment are reporting new data that point toward the potential detection of dark matter particles, according to NBC News. MIT physicist Samuel Ting, AMS's principal investigator, explains: “This is the first experimental observation of the positron fraction maximum after half a century of cosmic rays experiments."

Shedding light on the search for dark matter