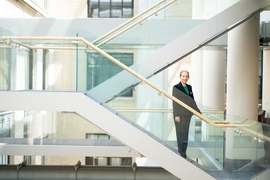 ↓ Download Image
Caption: Associate professor Tracy Slatyer focuses on searching through telescope data for signals of mysterious phenomena such as dark matter, the invisible stuff that makes up more than 80 percent of the matter in the universe but has only been detected through its gravitational pull. In her teaching, she seeks to draw out and support a new and diverse crop of junior scientists.
Credits: Images: Bryce Vickmark

Caption:
Associate professor Tracy Slatyer focuses on searching through telescope data for signals of mysterious phenomena such as dark matter, the invisible stuff that makes up more than 80 percent of the matter in the universe but has only been detected through its gravitational pull. In her teaching, she seeks to draw out and support a new and diverse crop of junior scientists.
Credits:
Images: Bryce Vickmark

When Tracy Slatyer faced a crisis of confidence early in her educational career, Stephen Hawking’s “A Brief History of Time” and a certain fictional janitor at MIT helped to bolster her resolve.

Slatyer was 11 when her family moved from Canberra, Australia, to the island nation of Fiji. It was a three-year stay, as part of her father’s work for the South Pacific Forum, an intergovernmental organization.

“Fiji was quite a way behind the U.S. and Australia in terms of gender equality, and for a girl to be interested in math and science carried noticeable social stigma,” Slatyer recalls. “I got bullied quite a lot.”

She eventually sought guidance from the school counselor, who placed the blame for the bullying on the victim herself, saying that Slatyer wasn’t sufficiently “feminine.” Slatyer countered that the bullying seemed to be motivated by the fact that she was interested in and good at math, and she recalls the counselor’s unsympathetic advice: “Well, yes, honey, that’s a problem you can fix.”

“I went home and thought about it, and decided that math and science were important to me,” Slatyer says. “I was going to keep doing my best to learn more, and if I got bullied, so be it.”

She doubled down on her studies and spent a lot of time at the library; she also benefited from supportive parents, who gave her Hawking’s groundbreaking book on the origins of the universe and the nature of space and time.

“It seemed like the language in which these ideas could most naturally be described was that of mathematics,” Slatyer says. “I knew I was pretty good at math. And learning that that talent was potentially something I could apply to understanding how the universe worked, and maybe how it began, was very exciting to me.”

Around this same time, the movie “Good Will Hunting” came out in theaters. The story, of a townie custodian at MIT who is discovered as a gifted mathematician, had a motivating impact on Slatyer.

“What my 13-year-old self took out of this was, MIT was a place where, if you were talented at math, people would see that as a good thing rather than something to be stigmatized, and make you welcome — even if you were a janitor or a little girl from Fiji,” Slatyer says. “It was my first real indication that such places might exist. Since then, MIT has been an important symbol to me, of valuing intellectual inquiry and being willing to accept anyone in the world.”

This year, Slatyer received tenure at MIT and is now the Jerrold R. Zacharias Associate Professor of Physics and a member of the Center for Theoretical Physics and the Laboratory for Nuclear Science. She focuses on searching through telescope data for signals of mysterious phenomena such as dark matter, the invisible stuff that makes up more than 80 percent of the matter in the universe but has only been detected through its gravitational pull. In her teaching, she seeks to draw out and support a new and diverse crop of junior scientists.

“If you want to understand how the universe works, you want the very best and brightest people,” Slatyer says. “It’s essential that theoretical physics becomes more inclusive and welcoming, both from a moral perspective and to get the best science done.”

Slatyer’s family eventually moved back to Canberra, where she dove eagerly into the city’s educational opportunities.

After earning an undergraduate degree from the Australian National University, followed by a brief stint at the University of Melbourne, Slatyer was accepted to Harvard University as a physics graduate student. Her interests were slowly gravitating toward particle physics, but she was unsure about which direction to take. Then, two of her mentors put her in touch with a junior faculty member, Doug Finkbeiner, who was leading a project to mine astrophysical data for signals of new physics.

At the time, much of the physics community was eagerly anticipating the start-up of the Large Hadron Collider and the release of data on particle interactions at high energies, which could potentially reveal physics beyond the Standard Model.

In contrast, telescopes have long made public their own data on astrophysical phenomena. What if, instead of looking through these data for objects such as black holes and neutron stars that evolved over millions of years, one could comb through it for signals of more fundamental mysteries, such as hints of new elementary particles and even dark matter?

The prospects were new and exciting, and Slatyer promptly took on the challenge.

In 2008, the Fermi Gamma-Ray Space Telescope launched, giving astronomers a new view of the cosmos in the gamma-ray band of the electromagnetic spectrum, where high-energy astrophysical phenomena can be seen. Slatyer and Finkbeiner proposed that Fermi’s data might also reveal signals of dark matter, which could theoretically produce high-energy electrons when dark matter particles collide.

In 2009, Fermi made its data available to the public, and Slatyer and Finkbeiner —together with Harvard postdoc Greg Dobler and collaborators at New York University — put their mining tools to work as soon as the data were released online.

The group eventually constructed a map of the Milky Way galaxy, shining in gamma rays, and revealed a fuzzy, egg-like shape. Upon further analysis, led by Slatyer’s fellow PhD student Meng Su, this fuzzy “haze” coalesced into a figure-eight, or double-bubble structure, extending some 25,000 light-years above and below the disc of the Milky Way. Such a structure had never been observed before. The group named the mysterious structure the “Fermi bubbles,” after the telescope that originally observed it.

“It was really special — we were the first people in the history of the world to be able to look at the sky in this way and understand that this structure was there,” Slatyer says. “That’s a really incredible feeling, and chasing that feeling is something that inspires and motivates me, and I think many scientists.”

Searching for the invisible

Today, Slatyer continues to sift through Fermi data for evidence of dark matter. The Fermi Bubbles’ distinctive shape makes it unlikely they are associated with dark matter; they are more likely to reveal a past eruption from the giant black hole at the Milky Way’s center, or outflows fueled by exploding stars. However, other signals are more promising.

Around the center of the Milky Way, where dark matter is thought to concentrate, there is a glow of gamma rays. In 2013, Slatyer, her first PhD student Nicholas Rodd, and collaborators at Harvard University and Fermilab showed this glow had properties similar to what theorists would expect if dark matter particles were colliding and producing visible light. However, in 2015, Slatyer and collaborators at MIT and Princeton University challenged this interpretation with a new analysis, showing that the glow was more consistent with originating from a new population of spinning neutron stars called pulsars.

But the case is not quite closed. Recently, Slatyer and MIT postdoc Rebecca Leane reanalyzed the same data, this time injecting a fake dark matter signal into the data, to see whether the techniques developed in 2015 could detect dark matter if it were there. But the signal was missed, suggesting that if there were other, actual signals of dark matter in the Fermi data, they could have been missed as well.

Slatyer is now improving on data mining techniques to better detect dark matter in the Fermi data, along with other astrophysical open data. But she won’t be discouraged if her search comes up empty.

“There’s no guarantee there is a dark matter signal,” Slatyer says. “But if you never look, you’ll never know. And in searching for dark matter signals in these datasets, you learn other things, like that our galaxy contains giant gamma-ray bubbles, and maybe a new population of pulsars, that no one ever knew about. If you look closely at the data, the universe will often tell you something new.”

Meet the 2019 tenured professors in the School of Science