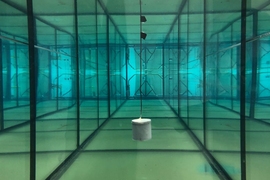 ↓ Download Image
Caption: A battery-free underwater “piezoelectric” sensor invented by MIT researchers transmits data by absorbing or reflecting sound waves back to a receiver, where a reflected wave decodes a 1 bit and an absorbed wave decodes a 0 bit — and simultaneously stores energy.
Credits: Image courtesy of the researchers

Caption:
A battery-free underwater “piezoelectric” sensor invented by MIT researchers transmits data by absorbing or reflecting sound waves back to a receiver, where a reflected wave decodes a 1 bit and an absorbed wave decodes a 0 bit — and simultaneously stores energy.
Credits:
Image courtesy of the researchers

To investigate the vastly unexplored oceans covering most our planet, researchers aim to build a submerged network of interconnected sensors that send data to the surface — an underwater “internet of things.” But how to supply constant power to scores of sensors designed to stay for long durations in the ocean’s deep?

MIT researchers have an answer: a battery-free underwater communication system that uses near-zero power to transmit sensor data. The system could be used to monitor sea temperatures to study climate change and track marine life over long periods — and even sample waters on distant planets. They are presenting the system at the SIGCOMM conference this week, in a paper that has won the conference’s “best paper” award.

The system makes use of two key phenomena. One, called the “piezoelectric effect,” occurs when vibrations in certain materials generate an electrical charge. The other is “backscatter,” a communication technique commonly used for RFID tags, that transmits data by reflecting modulated wireless signals off a tag and back to a reader.

In the researchers’ system, a transmitter sends acoustic waves through water toward a piezoelectric sensor that has stored data. When the wave hits the sensor, the material vibrates and stores the resulting electrical charge. Then the sensor uses the stored energy to reflect a wave back to a receiver — or it doesn’t reflect one at all. Alternating between reflection in that way corresponds to the bits in the transmitted data: For a reflected wave, the receiver decodes a 1; for no reflected wave, the receiver decodes a 0.

“Once you have a way to transmit 1s and 0s, you can send any information,” says co-author Fadel Adib, an assistant professor in the MIT Media Lab and the Department of Electrical Engineering and Computer Science and founding director of the Signal Kinetics Research Group. “Basically, we can communicate with underwater sensors based solely on the incoming sound signals whose energy we are harvesting.”

The researchers demonstrated their Piezo-Acoustic Backscatter System in an MIT pool, using it to collect water temperature and pressure measurements. The system was able to transmit 3 kilobits per second of accurate data from two sensors simultaneously at a distance of 10 meters between sensor and receiver.

Applications go beyond our own planet. The system, Adib says, could be used to collect data in the recently discovered subsurface ocean on Saturn’s largest moon, Titan. In June, NASA announced the Dragonfly mission to send a rover in 2026 to explore the moon, sampling water reservoirs and other sites.

“How can you put a sensor under the water on Titan that lasts for long periods of time in a place that’s difficult to get energy?” says Adib, who co-wrote the paper with Media Lab researcher JunSu Jang. “Sensors that communicate without a battery open up possibilities for sensing in extreme environments.” 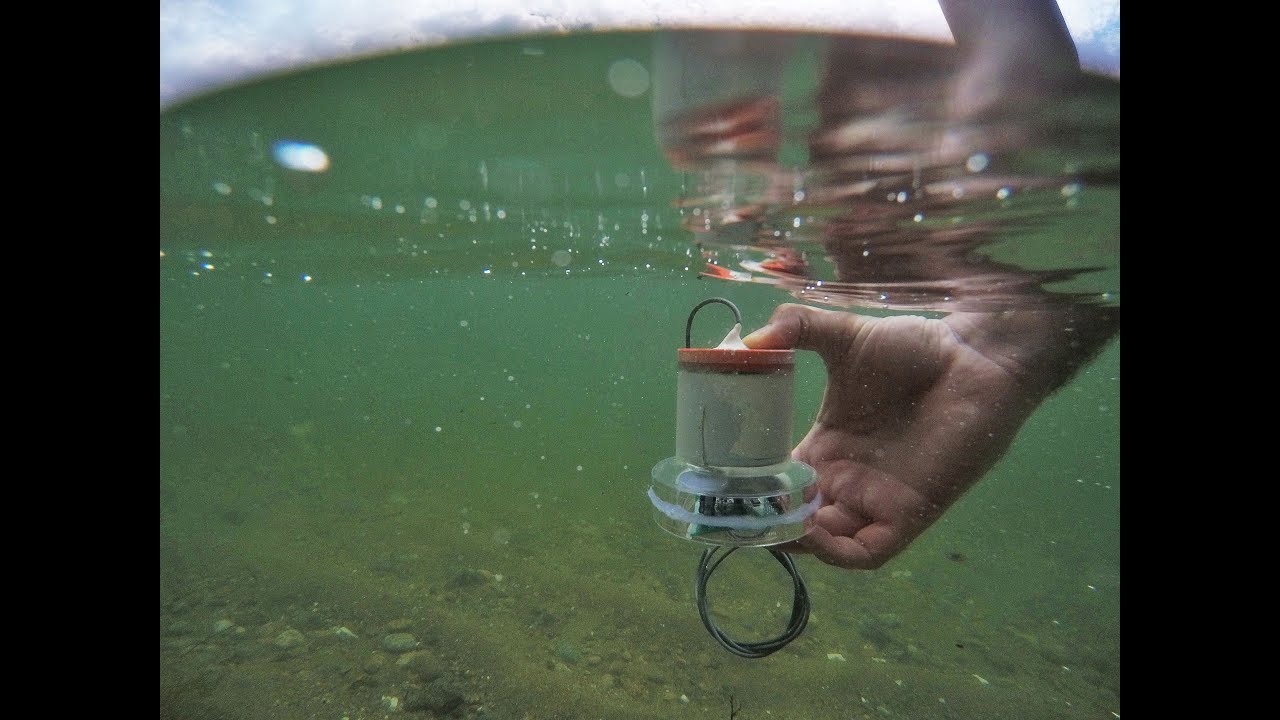 Inspiration for the system hit while Adib was watching “Blue Planet,” a nature documentary series exploring various aspects of sea life. Oceans cover about 72 percent of Earth’s surface. “It occurred to me how little we know of the ocean and how marine animals evolve and procreate,” he says. Internet-of-things (IoT) devices could aid that research, “but underwater you can’t use Wi-Fi or Bluetooth signals … and you don’t want to put batteries all over the ocean, because that raises issues with pollution.”

That led Adib to piezoelectric materials, which have been around and used in microphones and other devices for about 150 years. They produce a small voltage in response to vibrations. But that effect is also reversible: Applying voltage causes the material to deform. If placed underwater, that effect produces a pressure wave that travels through the water. They’re often used to detect sunken vessels, fish, and other underwater objects.

“That reversibility is what allows us to develop a very powerful underwater backscatter communication technology,” Adib says.

Communicating relies on preventing the piezoelectric resonator from naturally deforming in response to strain. At the heart of the system is a submerged node, a circuit board that houses a piezoelectric resonator, an energy-harvesting unit, and a microcontroller. Any type of sensor can be integrated into the node by programming the microcontroller. An acoustic projector (transmitter) and underwater listening device, called a hydrophone (receiver), are placed some distance away.

Say the sensor wants to send a 0 bit. When the transmitter sends its acoustic wave at the node, the piezoelectric resonator absorbs the wave and naturally deforms, and the energy harvester stores a little charge from the resulting vibrations. The receiver then sees no reflected signal and decodes a 0.

However, when the sensor wants to send a 1 bit, the nature changes. When the transmitter sends a wave, the microcontroller uses the stored charge to send a little voltage to the piezoelectric resonator. That voltage reorients the material’s structure in a way that stops it from deforming, and instead reflects the wave. Sensing a reflected wave, the receiver decodes a 1.

The transmitter and receiver must have power but can be planted on ships or buoys, where batteries are easier to replace, or connected to outlets on land. One transmitter and one receiver can gather information from many sensors covering one area or many areas.

“When you’re tracking a marine animal, for instance, you want to track it over a long range and want to keep the sensor on them for a long period of time. You don’t want to worry about the battery running out,” Adib says. “Or, if you want to track temperature gradients in the ocean, you can get information from sensors covering a number of different places.”

Another interesting application is monitoring brine pools, large areas of brine that sit in pools in ocean basins, and are difficult to monitor long-term. They exist, for instance, on the Antarctic Shelf, where salt settles during the formation of sea ice, and could aid in studying melting ice and marine life interaction with the pools. “We could sense what’s happening down there, without needing to keep hauling sensors up when their batteries die,” Adib says.

Polly Huang, a professor of electrical engineering at Taiwan National University, praised the work for its technical novelty and potential impact on environmental science. “This is a cool idea,” Huang says. “It's not news one uses piezoelectric crystals to harvest energy … [but is the] first time to see it being used as a radio at the same time [which] is unheard of to the sensor network/system research community. Also interesting and unique is the hardware design and fabrication. The circuit and the design of the encapsulation are both sound and interesting.”

While noting that the system still needs more experimentation, especially in sea water, Huang adds that “this might be the ultimate solution for researchers in marine biography, oceanography, or even meteorology — those in need of long-term, low-human-effort underwater sensing.”

Next, the researchers aim to demonstrate that the system can work at farther distances and communicate with more sensors simultaneously. They’re also hoping to test if the system can transmit sound and low-resolution images.

The work is sponsored, in part, by the U.S Office of Naval Research.

Prof. Fadel Adib has created a new underwater device that not only broadcasts and receives sound, but is also powered by sound, reports The Economist. In the future, Adib and his colleagues hope the device could be used to “transmit information about water temperature, acidity and salinity.”