MIT Media Lab researchers have developed a wireless system that leverages the cheap RFID tags already on hundreds of billions of products to sense potential food contamination — with no hardware modifications needed. With the simple, scalable system, the researchers hope to bring food-safety detection to the general public.

Food safety incidents have made headlines around the globe for causing illness and death nearly every year for the past two decades. Back in 2008, for instance, 50,000 babies in China were hospitalized after eating infant formula adulterated with melamine, an organic compound used to make plastics, which is toxic in high concentrations. And this April, more than 100 people in Indonesia died from drinking alcohol contaminated, in part, with methanol, a toxic alcohol commonly used to dilute liquor for sale in black markets around the world.

The researchers’ system, called RFIQ, includes a reader that senses minute changes in wireless signals emitted from RFID tags when the signals interact with food. For this study they focused on baby formula and alcohol, but in the future, consumers might have their own reader and software to conduct food-safety sensing before buying virtually any product. Systems could also be implemented in supermarket back rooms or in smart fridges to continuously ping an RFID tag to automatically detect food spoilage, the researchers say.

The technology hinges on the fact that certain changes in the signals emitted from an RFID tag correspond to levels of certain contaminants within that product. A machine-learning model “learns” those correlations and, given a new material, can predict if the material is pure or tainted, and at what concentration. In experiments, the system detected baby formula laced with melamine with 96 percent accuracy, and alcohol diluted with methanol with 97 percent accuracy.

“In recent years, there have been so many hazards related to food and drinks we could have avoided if we all had tools to sense food quality and safety ourselves,” says Fadel Adib, an assistant professor at the Media Lab who is co-author on a paper describing the system, which is being presented at the ACM Workshop on Hot Topics in Networks. “We want to democratize food quality and safety, and bring it to the hands of everyone.” 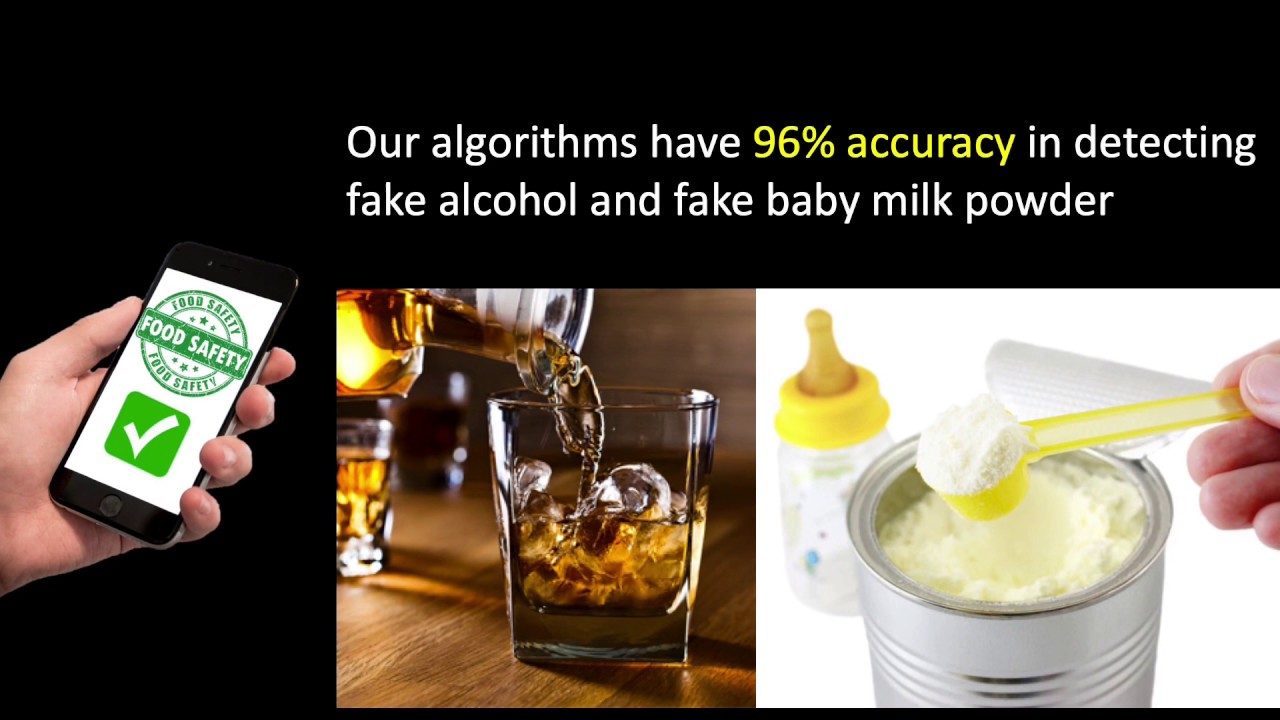 The power of “weak coupling”

Other sensors have also been developed for detecting chemicals or spoilage in food. But those are highly specialized systems, where the sensor is coated with chemicals and trained to detect specific contaminations. The Media Lab researchers instead aim for broader sensing. “We’ve moved this detection purely to the computation side, where you’re going to use the same very cheap sensor for products as varied as alcohol and baby formula,” Adib says.

RFID tags are stickers with tiny, ultra-high-frequency antennas. They come on food products and other items, and each costs around three to five cents. Traditionally, a wireless device called a reader pings the tag, which powers up and emits a unique signal containing information about the product it’s stuck to.

The researchers’ system leverages the fact that, when RFID tags power up, the small electromagnetic waves they emit travel into and are distorted by the molecules and ions of the contents in the container. This process is known as “weak coupling.” Essentially, if the material’s property changes, so do the signal properties.

A simple example of feature distortion is with a container of air versus water. If a container is empty, the RFID will always respond at around 950 megahertz. If it’s filled with water, the water absorbs some of the frequency, and its main response is around only 720 megahertz. Feature distortions get far more fine-grained with different materials and different contaminants. “That kind of information can be used to classify materials … [and] show different characteristics between impure and pure materials,” Ha says.

In the researchers’ system, a reader emits a wireless signal that powers the RFID tag on a food container. Electromagnetic waves penetrate the material inside the container and return to the reader with distorted amplitude (strength of signal) and phase (angle).

When the reader extracts the signal features, it sends those data to a machine-learning model on a separate computer. In training, the researchers tell the model which feature changes correspond to pure or impure materials. For this study, they used pure alcohol and alcohol tainted with 25, 50, 75, and 100 percent methanol; baby formula was adulterated with a varied percentage of melamine, from 0 to 30 percent.

“Then, the model will automatically learn which frequencies are most impacted by this type of impurity at this level of percentage,” Adib says. “Once we get a new sample, say, 20 percent methanol, the model extracts [the features] and weights them, and tells you, ‘I think with high accuracy that this is alcohol with 20 percent methanol.’”

“This is certainly a very inventive use of RFID-like technology, and could have strong impact in a number of real industries related to food and health,” says Ben Zhao, a professor of computer science at the University of Chicago. While the system needs to be further evaluated for accuracy for real-world applications, “it is clear that current results show promise. [The work] may well be the beginning of significant work in this space, and continued development along this direction may completely change the way we evaluate food quality in the future.”

The system’s concept derives from a technique called radio frequency spectroscopy, which excites a material with electromagnetic waves over a wide frequency and measures the various interactions to determine the material’s makeup.

But there was one major challenge in adapting this technique for the system: RFID tags only power up at a very tight bandwidth wavering around 950 megahertz. Extracting signals in that limited bandwidth wouldn’t net any useful information.

The researchers built on a sensing technique they developed earlier, called two-frequency excitation, which sends two frequencies — one for activation, and one for sensing — to measure hundreds more frequencies. The reader sends a signal at around 950 megahertz to power the RFID tag. When it activates, the reader sends another frequency that sweeps a range of frequencies from around 400 to 800 megahertz. It detects the feature changes across all these frequencies and feeds them to the reader.

“Given this response, it’s almost as if we have transformed cheap RFIDs into tiny radio frequency spectroscopes,” Adib says.

Because the shape of the container and other environmental aspects can affect the signal, the researchers are currently working on ensuring the system can account for those variables. They are also seeking to expand the system’s capabilities to detect many different contaminants in many different materials.

“We want to generalize to any environment,” Adib says. “That requires us to be very robust, because you want to learn to extract the right signals and to eliminate the impact of the environment from what’s inside the material.”

CBS This Morning correspondent Nikki Battiste visits MIT to learn more about a device developed by MIT researchers that uses wireless signals to detect food contamination. “We hope to be able to build a portable device that a person can take with them when they're trying to buy something from a supermarket or from a farmer's market,” explains Prof. Fadel Adib.

Full story via CBS This Morning →

MIT researchers have developed a new system to detect contaminated food by scanning a product’s RFID tags, reports Devin Coldewey for TechCrunch. The system can “tell the difference between pure and melamine-contaminated baby formula, and between various adulterations of pure ethyl alcohol,” Coldewey explains.