Ambient plant illumination could light the way for greener buildings 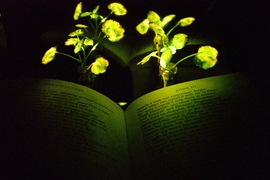 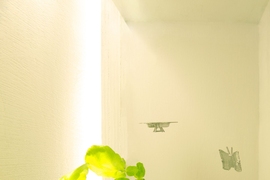 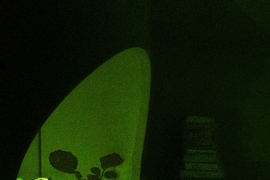 Buildings of the future may be lit by collections of glowing plants and designed around an infrastructure of sunlight harvesting, water transport, and soil collecting and composting systems. That’s the vision behind an interdisciplinary collaboration between an MIT architecture professor and a professor of chemical engineering.

The light-emitting plants, which debuted in 2017, are not genetically modified to produce light. Instead, they are infused with nanoparticles that turn the plant’s stored energy into light, similar to how fireflies glow. “The transformation makes virtually any plant a sustainable, potentially revolutionary technology,” says Michael Strano, the Carbon P. Dubbs Professor of Chemical Engineering at MIT. “It promises lighting independent of an electrical grid, with ‘batteries’ you never need to charge, and power lines that you never need to lay.”

But Strano and his colleagues soon realized that they needed partners who could expand the concept and understand its challenges and potential as part of a future of sustainable energy. He reached out to Sheila Kennedy, professor of architecture at MIT and principal at Kennedy and Violich Architecture, who is known for her work in clean energy infrastructure.

“The science was so new and emergent that it seemed like an interesting design challenge,” says Kennedy. “The work of this design needed to move to a different register, which went beyond the problem of how the plant nanobionics could be demonstrated in architecture. As a design team, we considered some fundamental questions, such as how to understand and express the idea of plant lighting as a living, biological technology and how to invite the public to imagine this new future with plants.”

“If we treat the development of the plant as we would just another light bulb, that’s the wrong way to go,” Strano adds.

In 2017, Kennedy and Strano received a Professor Amar G. Bose Research Grant to build on their collaboration. The MIT faculty grants support unconventional, ahead-of-the-curve, and often interdisciplinary research endeavors that are unlikely to be funded through traditional avenues, yet have the potential to lead to big breakthroughs.

Their first year of the Bose grant yielded several generations of the light-emitting watercress plants, which shine longer and brighter than the first experimental versions. The team is evaluating a new component to the nanobiotic plants that they call light capacitor particles. The capacitor, in the form of infused nanoparticles in the plant, stores spikes in light generation and “bleeds them out over time,” Strano explains. “Normally the light created in the biochemical reaction can be bright but fades quickly over time. Capacitive particles extend the duration of the generated plant light from hours to potentially days and weeks.”

The researchers have added to their original patent on the light-emitting plant concept, filing a new patent on the capacitor and other components as well, Strano says.

As the nanobionic plant technology has advanced, the team is also envisioning how people might interact with the plants as part of everyday life. The architectural possibilities of their light-emitting plant will be on display within a new installation, “Plant Properties, a Future Urban Development,” at the Cooper Hewitt, Smithsonian Design Museum in New York opening May 10.

Visitors to the installation, part of the 2019 “Nature—Cooper Hewitt Design Triennial” exhibition, can peek into a scaled architectural model of a New York City tenement building — which also serves as a plant incubator — to see the plants at work. The installation also demonstrates a roadmap for how an existing residential building could be adapted and transformed by design to support the natural growth of plants in a future when available energy could be very limited.

“In Plant Properties, the nanobionic plant-based infrastructure is designed to use nature’s own resources,” says Kennedy. “The building harvests and transports sunlight, collects and recycles water, and enriches soil with compost.”

The invitation to contribute to the Cooper Hewitt exhibition offered an unexpected way to demonstrate the plants’ possibilities, but designing an exhibit brought about a whole new set of challenges, Kennedy explains. “In the world of design museums, you’re usually asked to show something that’s already been exhibited, but this is new work and a new milestone in this project.”

“We learned a lot about the care of plants,” Strano adds. “It’s one thing to make a laboratory demonstration, but it’s another entirely to make 33 continuous weeks of a public demonstration.”

The researchers had to come up with a way to showcase the plants in a low-light museum environment where dirt and insects attracted by living plants are usually banished. “But rather than seeing this as a sort of insurmountable obstacle,” says Kennedy, “we realized that this kind of situation — how do you enable living plants to thrive in the enclosed setting of a museum — exactly paralleled the architectural problem of how to support significant quantities of plants growing inside buildings.”

In the installation, multiple peepholes into the building model offer glimpses into the ways people in the building are living with the plants. Museum visitors are encouraged to join the experiment and crowdsource information on plant growth and brightness, by uploading their own photos of the plants to Instagram and tagging the MIT Plant Nanobiotics lab, using @plantproperties.

The team is also collecting data on how the plants respond to the nanoparticles and other potential stresses. “The plants are actually under more stress from being in the museum environment than from the modifications that we introduce, but these effects need to be studied and mitigated if we are to use plants for indoor lighting,” Strano notes.

Kennedy and Strano say the plants could be at the center of a new — but also “pre-eclectic” — idea in architecture.

For most of human history, Kennedy explains, natural processes from sunlight to waste composting were part of the essential infrastructure of buildings. But these processes have been excluded in modern thinking or hidden away, preventing people from coming face to face with the environmental costs of energy infrastructure made from toxic materials and powered by fossil fuels.

“People don’t question the impacts of our own mainstream electrical grid today. It’s very vulnerable, it’s very brittle, it’s so very wasteful and it’s also full of toxic material,” she says. “We don’t question this, but we need to.”

“Lighting right now consumes a vast portion of our energy demand, approaching close to 20 percent of our global energy consumption, generating two gigatons of carbon dioxide per year,” Strano adds. “Consider that the plants replace more than just the lamp on your desk. There’s an enormous energy footprint that could potentially be replaced by the light-emitting plant.”

The team is continuing to work on new ways to infuse the nanoparticles in the plants, so that they work over the lifetime of the plant, as well as experimenting on larger plants such as trees. But for the plants to thrive, architects will have to develop building infrastructure that integrates the plants into a new internal ecosystem of sunlight, water and waste disposal, Kennedy says.

“If plants are to provide people with light, we need to keep plants healthy to benefit from everything they provide for us,” she says. “We think this is going to trigger a much more caring or nurturing relationship of people and their plants, or plants and the people that they illuminate.”

Profs. Michael Strano and Sheila Kennedy have developed an exhibit for the Cooper Hewitt Design Triennial, which explores how Strano’s glowing plant research could be part of a sustainable energy future. “The pair is one of 62 design teams involved in the [Triennial], which highlights innovative ways humans are engaging with nature,” writes Emily Matchar for Smithsonian.

Soft design for a sustainable world