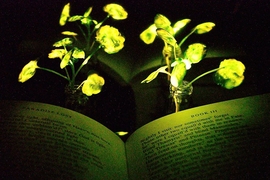 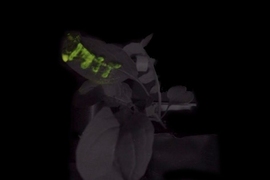 ↓ Download Image
Caption: Glowing MIT logo printed on the leaf of an arugula plant. The mixture of nanoparticles was infused into the leaf using lab-designed syringe termination adaptors. The image is merged of the bright-field image and light emission in the dark.

Caption:
Glowing MIT logo printed on the leaf of an arugula plant. The mixture of nanoparticles was infused into the leaf using lab-designed syringe termination adaptors. The image is merged of the bright-field image and light emission in the dark.

Imagine that instead of switching on a lamp when it gets dark, you could read by the light of a glowing plant on your desk.

MIT engineers have taken a critical first step toward making that vision a reality. By embedding specialized nanoparticles into the leaves of a watercress plant, they induced the plants to give off dim light for nearly four hours. They believe that, with further optimization, such plants will one day be bright enough to illuminate a workspace.

“The vision is to make a plant that will function as a desk lamp — a lamp that you don’t have to plug in. The light is ultimately powered by the energy metabolism of the plant itself,” says Michael Strano, the Carbon P. Dubbs Professor of Chemical Engineering at MIT and the senior author of the study.

This technology could also be used to provide low-intensity indoor lighting, or to transform trees into self-powered streetlights, the researchers say.

MIT postdoc Seon-Yeong Kwak is the lead author of the study, which appears in the journal Nano Letters.

Plant nanobionics, a new research area pioneered by Strano’s lab, aims to give plants novel features by embedding them with different types of nanoparticles. The group’s goal is to engineer plants to take over many of the functions now performed by electrical devices. The researchers have previously designed plants that can detect explosives and communicate that information to a smartphone, as well as plants that can monitor drought conditions.

Lighting, which accounts for about 20 percent of worldwide energy consumption, seemed like a logical next target. “Plants can self-repair, they have their own energy, and they are already adapted to the outdoor environment,” Strano says. “We think this is an idea whose time has come. It’s a perfect problem for plant nanobionics.”

The MIT team packaged each of these three components into a different type of nanoparticle carrier. The nanoparticles, which are all made of materials that the U.S. Food and Drug Administration classifies as “generally regarded as safe,” help each component get to the right part of the plant. They also prevent the components from reaching concentrations that could be toxic to the plants.

Particles releasing luciferin and coenzyme A were designed to accumulate in the extracellular space of the mesophyll, an inner layer of the leaf, while the smaller particles carrying luciferase enter the cells that make up the mesophyll. The PLGA particles gradually release luciferin, which then enters the plant cells, where luciferase performs the chemical reaction that makes luciferin glow.

The researchers’ early efforts at the start of the project yielded plants that could glow for about 45 minutes, which they have since improved to 3.5 hours. The light generated by one 10-centimeter watercress seedling is currently about one-thousandth of the amount needed to read by, but the researchers believe they can boost the light emitted, as well as the duration of light, by further optimizing the concentration and release rates of the components.

Previous efforts to create light-emitting plants have relied on genetically engineering plants to express the gene for luciferase, but this is a laborious process that yields extremely dim light. Those studies were performed on tobacco plants and Arabidopsis thaliana, which are commonly used for plant genetic studies. However, the method developed by Strano’s lab could be used on any type of plant. So far, they have demonstrated it with arugula, kale, and spinach, in addition to watercress.

For future versions of this technology, the researchers hope to develop a way to paint or spray the nanoparticles onto plant leaves, which could make it possible to transform trees and other large plants into light sources.

“Our target is to perform one treatment when the plant is a seedling or a mature plant, and have it last for the lifetime of the plant,” Strano says. “Our work very seriously opens up the doorway to streetlamps that are nothing but treated trees, and to indirect lighting around homes.”

The researchers have also demonstrated that they can turn the light off by adding nanoparticles carrying a luciferase inhibitor. This could enable them to eventually create plants that shut off their light emission in response to environmental conditions such as sunlight, the researchers say.

The research was funded by the U.S. Department of Energy.

Verge reporter Angela Chen spotlights Prof. Michael Strano’s work using nanobionics to engineer plants. “It’s long overdue that we start to look at plants as the starting point of technology,” explains Strano. “As an engineering platform, they have a number of untapped advantages.”

MIT researchers have developed a method for turning plant leaves into a light source by injecting light-emitting nanoparticles into the leaves, reports Mark Ellwood for The Wall Street Journal. “Currently, researchers are able to make plants such as spinach, kale and watercress emit a dim light for about 4 hours,” says Ellwood, “up from 45 minutes when the project began in 2015.”

In a VICE News Tonight climate segment, MIT postdocs Volodymyr Koman and Seon-Yeong Kwak explain their technique for making plants glow in the dark to a first-grade class in Boston. Following a demonstration mixing plant glucose with the specialized nanoparticles, one student exclaims in disbelief, “no battery or anything!”

Tony Lee of Mashable spotlights the technique developed by MIT researchers that allows plants to glow when inserted with nanoparticles containing luciferase,  an enzyme known to make fireflies glow.

Prof. Michael Strano spoke with CNN’s Nicola Davison about his recent work making plants glow. "We're thinking about how we can engineer plants to replace functions of the devices that we encounter every day. The things that we make out of plastic and circuit boards -- can we replace those with a living plant?" said Strano.

Boston Globe reporter Alex Kingsbury highlights how MIT researchers have developed a new technique that allows plants to glow in the dark. Kingsbury writes that, “In subsequent tests with watercress, arugula, kale, and spinach, the plants glowed for 3.5 hours. Researchers also figured out a way to turn off the glow during daylight hours.”

Prof. Michael Strano speaks with BBC News reporter Alan Kasujja about the technique his team developed to embed nanoparticles into a plant’s leaves so that it can glow in the dark. Strano explains that his team figured out, “how to control where these particles go inside the plant…We can put them right near the biochemical processes where photosynthesis occurs.”

Boston 25 News reports that MIT researchers have developed a new technique that allows plants to glow in the dark and could potentially be used in the future to transform them into sources of electricity. The researchers demonstrated the technique on several different types of plants, including kale, arugula, spinach, and watercress.

Newsweek reporter Sydney Pereira writes that MIT researchers have engineered a plant that can glow in the dark by embedding nanoparticles into the plant’s leaves. “Further optimization could one day lead to plants that could illuminate entire work spaces or sprays that can be coated onto trees to transform them into streetlights,” Pereira explains.