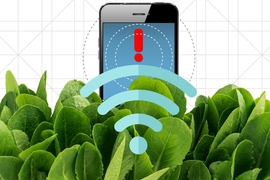 ↓ Download Image
Caption: By embedding spinach leaves with carbon nanotubes, MIT engineers have transformed spinach plants into sensors that can detect explosives and wirelessly relay that information to a handheld device similar to a smartphone.

Caption:
By embedding spinach leaves with carbon nanotubes, MIT engineers have transformed spinach plants into sensors that can detect explosives and wirelessly relay that information to a handheld device similar to a smartphone.

Spinach is no longer just a superfood: By embedding leaves with carbon nanotubes, MIT engineers have transformed spinach plants into sensors that can detect explosives and wirelessly relay that information to a handheld device similar to a smartphone.

This is one of the first demonstrations of engineering electronic systems into plants, an approach that the researchers call “plant nanobionics.”

“The goal of plant nanobionics is to introduce nanoparticles into the plant to give it non-native functions,” says Michael Strano, the Carbon P. Dubbs Professor of Chemical Engineering at MIT and the leader of the research team.

In this case, the plants were designed to detect chemical compounds known as nitroaromatics, which are often used in landmines and other explosives. When one of these chemicals is present in the groundwater sampled naturally by the plant, carbon nanotubes embedded in the plant leaves emit a fluorescent signal that can be read with an infrared camera. The camera can be attached to a small computer similar to a smartphone, which then sends an email to the user.

“This is a novel demonstration of how we have overcome the plant/human communication barrier,” says Strano, who believes plant power could also be harnessed to warn of pollutants and environmental conditions such as drought.

Strano is the senior author of a paper describing the nanobionic plants in the Oct. 31 issue of Nature Materials. The paper’s lead authors are Min Hao Wong, an MIT graduate student who has started a company called Plantea to further develop this technology, and Juan Pablo Giraldo, a former MIT postdoc who is now an assistant professor at the University of California at Riverside.

Two years ago, in the first demonstration of plant nanobionics, Strano and Giraldo used nanoparticles to enhance plants’ photosynthesis ability and to turn them into sensors for nitric oxide, a pollutant produced by combustion.

Plants are ideally suited for monitoring the environment because they already take in a lot of information from their surroundings, Strano says.

“Plants are very good analytical chemists,” he says. “They have an extensive root network in the soil, are constantly sampling groundwater, and have a way to self-power the transport of that water up into the leaves.”

Strano’s lab has previously developed carbon nanotubes that can be used as sensors to detect a wide range of molecules, including hydrogen peroxide, the explosive TNT, and the nerve gas sarin. When the target molecule binds to a polymer wrapped around the nanotube, it alters the tube’s fluorescence.

In the new study, the researchers embedded sensors for nitroaromatic compounds into the leaves of spinach plants. Using a technique called vascular infusion, which involves applying a solution of nanoparticles to the underside of the leaf, they placed the sensors into a leaf layer known as the mesophyll, which is where most photosynthesis takes place.

They also embedded carbon nanotubes that emit a constant fluorescent signal that serves as a reference. This allows the researchers to compare the two fluorescent signals, making it easier to determine if the explosive sensor has detected anything. If there are any explosive molecules in the groundwater, it takes about 10 minutes for the plant to draw them up into the leaves, where they encounter the detector.

To read the signal, the researchers shine a laser onto the leaf, prompting the nanotubes in the leaf to emit near-infrared fluorescent light. This can be detected with a small infrared camera connected to a Raspberry Pi, a $35 credit-card-sized computer similar to the computer inside a smartphone. The signal could also be detected with a smartphone by removing the infrared filter that most camera phones have, the researchers say.

“This setup could be replaced by a cell phone and the right kind of camera,” Strano says. “It’s just the infrared filter that would stop you from using your cell phone.”

Using this setup, the researchers can pick up a signal from about 1 meter away from the plant, and they are now working on increasing that distance.

Michael McAlpine, an associate professor of mechanical engineering at the University of Minnesota, says this approach holds great potential for engineering not only sensors but many other kinds of bionic plants that might receive radio signals or change color.

“When you have manmade materials infiltrated into a living organism, you can have plants do things that plants don’t ordinarily do,” says McAlpine, who was not involved in the research. “Once you start to think of living organisms like plants as biomaterials that can be combined with electronic materials, this is all possible.”

“A wealth of information”

In the 2014 plant nanobionics study, Strano’s lab worked with a common laboratory plant known as Arabidopsis thaliana. However, the researchers wanted to use common spinach plants for the latest study, to demonstrate the versatility of this technique. “You can apply these techniques with any living plant,” Strano says.

So far, the researchers have also engineered spinach plants that can detect dopamine, which influences plant root growth, and they are now working on additional sensors, including some that track the chemicals plants use to convey information within their own tissues.

“Plants are very environmentally responsive,” Strano says. “They know that there is going to be a drought long before we do. They can detect small changes in the properties of soil and water potential. If we tap into those chemical signaling pathways, there is a wealth of information to access.”

These sensors could also help botanists learn more about the inner workings of plants, monitor plant health, and maximize the yield of rare compounds synthesized by plants such as the Madagascar periwinkle, which produces drugs used to treat cancer.

“These sensors give real-time information from the plant. It is almost like having the plant talk to us about the environment they are in,” Wong says. “In the case of precision agriculture, having such information can directly affect yield and margins.”

Axios reporter Bryan Walsh spotlights how MIT researchers have developed a new way for chemical signals in spinach leaves to transmit emails. “The system could help provide an early warning system for explosives or pollution, but really, we just want to know what the spinach are thinking,” writes Walsh.

Fast Company reporter Adele Peters spotlights Prof. Michael Strano’s work exploring how to embed nanoparticles into plant leaves, as part of an effort to see if they could serve as sensors. “We started asking the question, can we make living plants to do some of the functions that humans do by stamping things out of plastic and circuit boards—things that go into landfills?” says Strano.

MIT researchers have developed a way to embed spinach leaves with sensors, which would allow them to serve as sensors that could monitor groundwater for contaminates, reports The Guardian. “Plants are very environmentally responsive,” explains Prof. Michael Strano. “If we tap into those chemical signaling pathways, there is a wealth of information to access.”

In this video, Wired spotlights how Prof. Michael Strano and his team developed spinach plants that can detect explosives in groundwater. Strano explains that in the future he thinks people will be “surprised about what you can do with a living plant.”

Scientists at MIT have developed spinach plants that can detect and alert people about explosives, reports Matthew Gunther for Scientific American. Grad student Min Hao Wong explains that plants are good sensors as “through the transpiration process, plants draw up water and other analytes from the ground, and can accumulate even trace levels of analytes within [their] tissues.”

CBS News reporter Brian Mastroianni writes that MIT researchers have engineered spinach plants to serve as sensors by embedding the leaves with carbon nanotubes. Mastroianni explains that the researchers feel this work shows that “plants could ultimately serve as great collaborators in helping people better understand the environment around them.”

Kate Samuelson writes for TIME that MIT engineers have created a method for turning spinach plants into bomb detectors that can wirelessly transmit warning signals. The research "opens the door to the use of wild-type plants for infrared communication in wide areas, and real-time monitoring of environments,” explains Samuelson.

Washington Post reporter Sarah Kaplan writes that MIT researchers have developed bionic spinach plants that can detect explosives. Kaplan explains that the researchers were able to “turn plants into bomb-sniffing machines with the help of tiny cylinders of carbon that can detect ‘nitroaromatics’ — chemical compounds often used in explosives.”

MIT researchers have created bomb-detecting spinach by embedding fluorescent nanoparticles into the plant’s leaves, The Guardian reports. Plants are ideal for this detection system because they “have built-in power sources and are able to move fluids around very efficiently,” explains Prof. Michael Strano.