Inside the world of livestreaming as entertainment 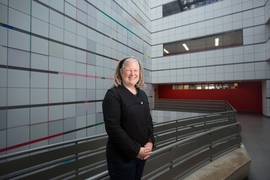 Several years ago, a couple thousand people filed into Le Grand Rex, a Paris auditorium, to watch a performance. It was not a concert, however. Instead, a group of professional computer-game players competed to see who could win at “StarCraft 2,” a science fiction game where human exiles from Earth battle aliens.

Beyond the audience watching in person, meanwhile, was another audience streaming an online broadcast of the competition — including T.L. Taylor, a professor in the Comparative Media Studies/Writing program at MIT.

For years, Taylor has been chronicling the rise of esports: competitive computer games watched by audiences like the one at Le Grand Rex. But, as Taylor chronicles in a new book, esports showcases are part of a larger cultural trend toward livestreaming as a distinctive mode of entertainment. That trend also encompasses a scrappier outsider culture of do-it-yourself gaming broadcasts and other uses of streaming, a genre as popular as it is overlooked in the mainstream media.

“We’re at a fascinating moment right now,” says Taylor, about the growth of the livestreaming movement.

And now, in her book, “Watch Me Play: Twitch and the Rise of Game Livestreaming,” Taylor examines the ascendance of livestreaming in its many forms, while analyzing the commercialization of streaming and some of the social tensions that come with the subculture.

As Taylor emphasizes in the book, the rise of livestreaming is very much tied to Twitch, the San Francisco-based streaming website where people broadcast their contests, and their lives. Twitch has about 10 million active daily users and was purchased by Amazon in 2014.

“Formalized competitive computer gaming has been around for decades,” Taylor notes. “But it also used to be a lot of work to be a fan. You had to know what specialist websites to visit. You had to download replay files or seek out recorded videos. Livestreaming changed everything.”

Originally, livestreaming was not necessarily meant to focus on gaming. Instead, it was partly conceived as a “new form of reality TV,” according to Justin Kan, who in 2007 founded Justin.tv, a site broadcasting events from his own life. After seeing how popular livestreaming of gaming was, however, Kan and some partners founded Twitch as a separate platform. It has since grown to encompass people who stream cooking and “social eating” content, music shows, and more.

Still, computer gaming remains a principal driver of livestreaming. One branch of this has become organized esports, complete with teams, sponsors, and corporate investment. Another branch consists of individuals building their own audiences and brands, one gaming session at a time, broadcasting on camera while playing and interacting with their audiences.

This can be a grueling occupation. In the book, Taylor visits the home of a suburban Florida gaming entrepreneur while he broadcasts a playing session that begins at 3:30 a.m., to draw a global audience. After several hours, the session netted this independent livestreaming player about 50 new subscribers, 800 new followers, and $500 in donations, all while his children slept.

“Eventually these livestreamers become not only content producers but also brand and community managers,” Taylor writes in the book. Some of them are also unlikely broadcast personalities, by their own admission. “I guess a part of me is that talkative person on the screen, but as soon as it goes off … I’m kind of a quiet person offstream,” says gaming star J.P. McDaniel, as recounted in Taylor’s book.

Meanwhile, livestreaming is a heavily male-dominated field. As Taylor documents in the book, women, people of color, and participants from the LGBTQ community can face serious levels of harassment, which limits their participation in the culture.

“Women also continue to face stereotypes and pushback when they focus on competitive games and have professional aspirations,” Taylor writes in the book. Indeed, a central theme of “Watch Me Play” is that all forms of livestreaming, including professional esports, have much to tell us about larger social trends, instead of existing as a kind of cultural cul-de-sac.

“Far too often we imagine what happens in play and games as being separate from ‘real life,’” says Taylor. “But our leisure is infused with not only our identities and social worlds, but broader cultural issues. This is probably most obvious when we think about how gender plays a powerful role in our leisure, shaping who is seen as legitimately allowed to play, what they can play, and in what ways.”

For this reason, Taylor adds, “those very moments when people are engaging in play remain some of the most politically infused spaces” in society. Thus, for all the novelty, Taylor hopes her study of livestreaming will appeal to those who have never watched competitive computer games, alone or at Le Grand Rex.

“My hope is that it [the book] gets picked up by not only those who are interested in livestreaming, but readers who might want to finally understand how to think about gaming” as it expands in society, and as entertainment becomes diversified across media platforms, Taylor says.

“Digital games have become a part of many people’s everyday lives,” she adds. “My hope is that the work helps make clear what is at stake in that.”