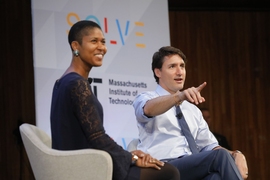 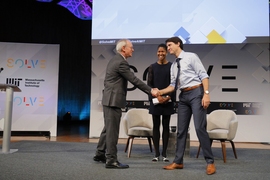 Speaking today at Solve at MIT, Canadian Prime Minister Justin Trudeau said that the best way to deal with the accelerating pace of profound changes in the world is to step up and help to influence how those changes unfold. Solve at MIT is the annual flagship meeting of Solve, which challenges teams around the world to come up with solutions to great challenges facing society.

People can be afraid of the changes being wrought by new technologies and an increasingly global and diverse society, and try to cling to past ways, “or else we can decide to shape the change,” he said. “That’s what’s happening here at MIT, and it’s also very much the mindset we take in Canada, and it’s the mindset we need around the world.”

He added that “there are going to be tremendous shifts, so let’s be part of it. It’s a deliberate choice — but not an easy choice.” One of the ways Canada is embracing future change, he said, is by “investing massively” in artificial intelligence research.

Trudeau, who has assembled the most diverse cabinet in Canada’s history, half of whom are women, said that this inclusiveness makes for a better decision-making process. He explained that his cabinet also includes a people with a variety of personal, ethnic, and professional backgrounds, from those who have run multimillion-dollar companies to those who ran a shelter for battered women. “Diversity is a source of strength, not of weakness,” he said. “Having someone alongside you with different perspectives helps you solve a problem.”

While some people equate leadership with being the strongest person around, Trudeau sees it differently: “I think leadership has been much more about gathering people around a common cause, and enabling them to contribute to it.” Leadership “used to be a very tribal thing,” he said. But in this era, with such diversity in our society, “leadership has to be about pulling people together, people who are different in many ways, around common ideals and a common purpose.”

Solve, in its three-day conference, set out four new grand challenges for teams to take on, and offered $650,000 in prizes and funding for the winning teams. Speaking of the way Solve addresses global problems by setting out these specific challenges and inviting anyone to participate in solving them, Trudeau said, “I’m really a fan of the grand challenge approach.” He cited a similar contest-based approach they had used in Canada to address the issue of involving more women in entrepreneurship, as a way of “empowering individuals to help in shaping their world. It’s not just about solutions, but actually creating a better, more engaged society for everyone.”

Trudeau spoke of the importance of allowing everyone to achieve their full potential. As a former high school teacher himself, he cited the example of an experiment in which a group of students was arbitrarily divided in two and assigned to different classes. The teacher of one group was told that those students were especially gifted, and the teacher of the other group was told that those students were the “slow” group, even though in fact both were the same. By the end of the school year, the supposedly “smart” class was in fact doing much better, and those in the supposedly less-smart group were in fact doing worse. Expectations had strongly influenced the outcomes. “People rise to the level you set for them,” he said.

MIT’s president, L. Rafael Reif, introduced Trudeau, who spoke before a capacity crowd at MIT’s Kesge Auditorium. He described the prime minister as a “practical optimist” who has invested heavily in science and technology to promote an innovation-based economy, and who has been a “passionate advocate for fighting climate change.”

Reif joked about the many similarities between MIT and Canada, including the fact that both have the beaver as their official mascot, both have bilingual leaders (“though I speak both languages with an accent,” he said), both have come up with popular sports to help get them through their long winters (“they have hockey, we have math”), and both are home to many brilliant Canadians.

After his talk and question-and-answer period at Kresge, Trudeau was given a tour of the MIT Media Lab, including presentations about the lab’s work on personal robotics and artificial intelligence, work on innovations in neuroscience including possible treatments for Alzheimer’s disease and on noninvasive neural stimulation, and on the use of artificial intelligence in education. Additional presentations included a description of the innovation ecosystem at MIT and its neighboring innovation district around Kendall Square. Media Lab Director Joi Ito, Vice President for Research Maria Zuber, Chancellor for Advancement Eric Grimson (who is a native of Saskatchewan), and Executive Vice President and Treasurer Israel Ruiz were among those participating in the tour with Trudeau.

“We are all interconnected,” Trudeau said in his Solve talk, “in a way that we haven’t been trained as a species to think about.” While our evolution has provided a sense of how to work together in small groups, it has left us ill-prepared to understand how our small, local actions can collectively alter the world, he said. “The idea that actions we can take could somehow affect the whole planet is completely beyond our instincts, our personal understanding of the world. We need to change our instinctive approach to solving problems.”

“The choices we make have an impact,” he said. “We’re terrible at making choices. But we have to convince the citizens that we do have to do something about this [climate change] problem even if it doesn’t affect you now. We have to involve everyone in the solution we’re trying to create.”

During remarks at the MIT Solve conference, Canada’s prime minister Justin Trudeau highlighted his country’s role in the future of AI. Trudeau believes Canada’s scientific accomplishments and cultural diversity will “ensure that AI systems will be programmed by teams with a broader understanding of human needs,” writes Hiawatha Bray for The Boston Globe.