Scientists alter membrane proteins to make them easier to study 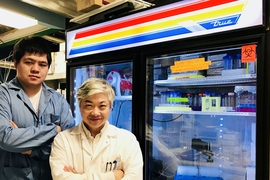 About 30 percent of the proteins encoded by the human genome are membrane proteins — proteins that span the cell membrane so they can facilitate communication between cells and their environment. These molecules are critical for learning, seeing, and sensing odors, among many other functions.

Despite the prevalence of these proteins, scientists have had difficulty studying their structures and functions because the membrane-bound portions are very hydrophobic, so they cannot be dissolved in water. This makes it much harder to do structural analyses, such as X-ray crystallography.

In an advance that could make it easier to perform this type of structural study, MIT researchers have developed a way to make these proteins water-soluble by swapping some of their hydrophobic amino acids for hydrophilic ones. The technique is based on a code that is much simpler than previously developed methods for making these proteins soluble, which rely on computer algorithms that have to be adapted to each protein on a case-by-case basis.

“If there is no rule to follow, it’s difficult for people to understand how to do it,” says Shuguang Zhang, a principal research scientist in the MIT Center for Bits and Atoms. “The tool has to be simple, something that anyone can use, not a sophisticated computer simulation that only a few people know how to use.”

Of the approximately 8,000 known membrane proteins found in human cells, scientists have discovered structures for about 50. They are widely viewed as very difficult to work with because once they are extracted from the cell membrane, they only maintain their structure if they are suspended in a detergent, which mimics the hydrophobic environment of the cell membrane. These detergents are expensive, and there is no universal detergent that works for all membrane proteins.

Zhang started working on a new way to tackle this problem in 2010, inspired by the late Alexander Rich, an MIT professor of biology. Rich posed the question of whether protein structures called alpha helices, which make up the bulk of the membrane-embedded portion of proteins, could be switched from hydrophobic to hydrophilic. Zhang immediately began working out possible solutions, but the problem proved difficult. Over the past eight years, he has had several students and visiting researchers help work on his idea, most recently Qing, who achieved success.

Another important factor is that none of these amino acids are charged, so swapping them appears to have a minimal effect on the overall protein structure. In fact, isoleucine and threonine are so similar that ribosomes, the cell structures that assemble proteins, occasionally insert the wrong one — about once in every 200 to 400 occurrences.

The researchers call their code the QTY code, after the three letters that represent glutamine, threonine, and tyrosine, respectively.

In their earliest efforts to implement this code, the researchers substituted only a small fraction of the hydrophobic amino acids embedded in the membrane, but the resulting proteins still needed some detergent to dissolve. They increased the replacement rate to about 50 percent, but the proteins were still not fully water-soluble, so they replaced all instances of glutamine, isoleucine, valine, and phenylalanine embedded in the membranes. This time, they achieved success.

“It’s only when we replace all the hydrophobic residues in the transmembrane regions that we’re able to get proteins that are stable and completely free of detergent in an aqueous system,” Qing says.

In this study, the researchers demonstrated their technique on four proteins that belong to a class of proteins known as G protein-coupled receptors. These proteins help cells to recognize molecules, such as hormones, or immune molecules, called chemokines, and trigger an appropriate response within the cell.

Joel Sussman, a professor of structural biology at the Weizmann Institute of Science, described the new method as “incredibly simple and elegant.”

“Although a number of scientists have been trying to find a way to ‘solubilize’ G protein-coupled receptors and other integral membrane proteins, until now their methods have not been of general use and often involved very complex computational methods that would not be widely applicable,” says Sussman, who was not involved in the research.

The researchers are still working towards obtaining the precise structures of these proteins using X-ray crystallography or nuclear magnetic resonance (NMR), but they performed some experiments that suggest the structures are similar. In one, they showed that the water-soluble proteins denature at nearly the same temperature as the original versions of the proteins. They also showed that the modified proteins bind to the same target molecules that the original proteins bind to, although not as strongly.

Being able to synthesize water-soluble versions of these proteins could enable new applications, such as sensors that can detect environmental pollutants, the researchers say.

Another possibility is designing water-soluble versions of the proteins that bind to molecules normally expressed by cancer cells, which could be used to diagnose tumors or identify metastatic cancer cells in blood samples, Zhang says. Researchers could also create water-soluble molecules in which a membrane-bound receptor that viruses normally bind to is attached to part of an antibody. If these “decoy therapies” were injected into the body, viruses would bind to the receptors and then be cleared by the immune system, which would be activated by the antibody portion.

The research was funded by OH2 Laboratories and the MIT Center for Bits and Atoms Consortium, which includes the Bay Valley Innovation Center.

Growing a business, from the lab