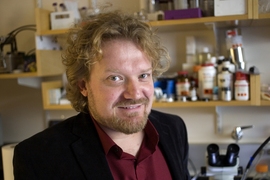 Caption:
Andreas Mershin
Credits:
Photo: M. Scott Brauer
Within a few years, people in remote villages in the developing world may be able to make their own solar panels, at low cost, using otherwise worthless agricultural waste as their raw material.

That’s the vision of MIT researcher Andreas Mershin, whose work appears this week in the open-access journal Scientific Reports. The work is an extension of a project begun eight years ago by Shuguang Zhang, a principal research scientist and associate director at MIT’s Center for Biomedical Engineering. Zhang was senior author of the new paper along with Michael Graetzel of Switzerland’s École Polytechnique Fédérale de Lausanne.

In his original work, Zhang was able to enlist a complex of molecules known as photosystem-I (PS-I), the tiny structures within plant cells that carry out photosynthesis. Zhang and colleagues derived the PS-I from plants, stabilized it chemically and formed a layer on a glass substrate that could — like a conventional photovoltaic cell — produce an electric current when exposed to light.

But that early system had some drawbacks. Assembling and stabilizing it required expensive chemicals and sophisticated lab equipment. What’s more, the resulting solar cell was weak: Its efficiency was several orders of magnitude too low to be of any use, meaning it had to be blasted with a high-power laser to produce any current at all.

Now Mershin says the process has been simplified to the point that virtually any lab could replicate it — including college or even high school science labs — allowing researchers around the world to start exploring the process and making further improvements. The new system’s efficiency is 10,000 times greater than in the previous version — although in converting just 0.1 percent of sunlight’s energy to electricity, it still needs to improve another tenfold or so to become useful, he says.

The key to achieving this huge improvement in efficiency, Mershin explains, was finding a way to expose much more of the PS-I complex per surface area of the device to the sun. Zhang’s earlier work simply produced a thin flat layer of the material; Mershin’s inspiration for the new advance was pine trees in a forest.

Mershin, a research scientist in the MIT Center for Bits and Atoms, noticed that while most of the pines had bare trunks and a canopy of branches only at the very top, a few had small branches all the way down the length of the trunk, capturing any sunlight that trickled down from above. He decided to create a microscopic forest on a chip, with PS-I coating his “trees” from top to bottom.

Turning that insight into a practical device took years of work, but in the end Mershin was able to create a tiny forest of zinc oxide (ZnO) nanowires as well as a sponge-like titanium dioxide (TiO2) nanostructure coated with the light-collecting material derived from bacteria. The nanowires not only served as a supporting structure for the material, but also as wires to carry the flow of electrons generated by the molecules down to the supporting layer of material, from which it could be connected to a circuit. “It’s like an electric nanoforest,” he says.

As an bonus, both zinc oxide and titanium dioxide — the main ingredient in many sunscreens — are very good at absorbing ultraviolet light. That’s helpful in this case because ultraviolet tends to damage PS-I, but in these structures that damaging light gets absorbed by the support structure. 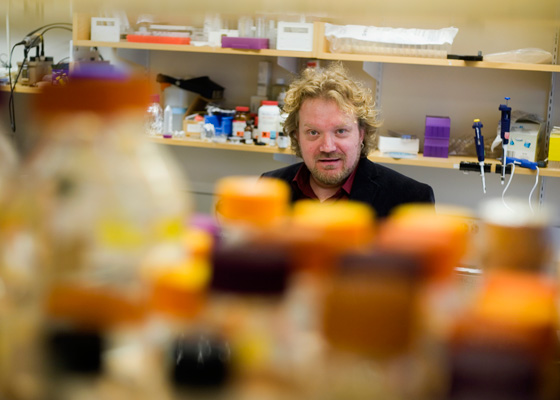 Mershin thinks that because he and his colleagues have now lowered the barrier to entry for further work on these materials, progress toward improving their efficiency should be rapid. Ultimately, once the efficiency reaches 1 or 2 percent, he says, that will be good enough to be useful, because the ingredients are so cheap and the processing so simple.

“You can use anything green, even grass clippings” as the raw material, he says — in some cases, waste that people would otherwise pay to have hauled away. While centrifuges were used to concentrate the PS-I molecules, the team has proposed a way to achieve this concentration by using inexpensive membranes for filtration. No special laboratory conditions are needed, Mershin says: “It can be very dirty and it still works, because of the way nature has designed it. Nature works in dirty environments — it’s the result of billions of experiments over billions of years.”

Because the system is so cheap and simple, he hopes this will become a “way of getting low-tech electricity to people who have never been thought of as consumers or producers of solar-power technology.” He hopes the instructions for making a solar cell will be simple enough to be reduced to “one sheet of cartoon instructions, with no words.” The only ingredient to be purchased would be chemicals to stabilize the PS-I molecules, which could be packaged inexpensively in a plastic bag.

Essentially, Mershin says, within a few years a villager in a remote, off-grid location could “take that bag, mix it with anything green and paint it on the roof” to start producing power, which could then charge cellphones or lanterns. Today, the most widely used source of lighting in such locations is kerosene lanterns — “the most expensive, most unhealthy” form of lighting there is, he says. “Nighttime illumination is the number one way to get out of poverty,” he adds, because it enables people who work in the fields all day to read at night and get an education.

Babak Parviz, an associate professor of electrical engineering at the University of Washington who specializes in bionanotechnology, says this is “a very exciting paper and a very nice step toward integrating biomolecules for building solar cells. This shows a very promising and creative first step toward building organic photovoltaic cells that can use biologically (naturally) produced cores.” He adds that while the present system still needs further development, “further work in the field can perhaps improve the stability and performance of these devices.”

The research was funded in part by an unrestricted grant from Intel Corp., and also included researchers at the University of Tennessee.