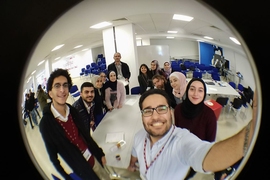 ↓ Download Image
Caption: Members of the initial class in computer and data science posed for a selfie as their classes began in Amman, Jordan last week. 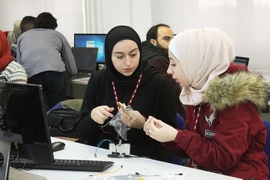 ↓ Download Image
Caption: Students in the initial class examine electronics components as they begin their year-long course of studies. 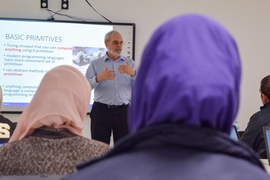 ↓ Download Image
Caption: MIT professor of computer science and engineering and chancellor Eric Grimson lectures at one of the introductory sessions of the ReACT certificate program in Amman, Jordan. 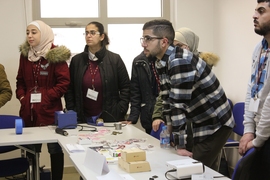 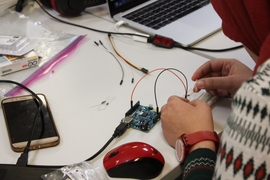 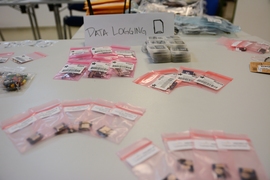 ↓ Download Image
Caption: The 18 students enrolled in this year’s initial offering of MIT’s certificate program for refugees were provided with a variety of electronic components and devices to use in their studies of computer and data science.

Caption:
Members of the initial class in computer and data science posed for a selfie as their classes began in Amman, Jordan last week.

Caption:
Students in the initial class examine electronics components as they begin their year-long course of studies.

Caption:
MIT professor of computer science and engineering and chancellor Eric Grimson lectures at one of the introductory sessions of the ReACT certificate program in Amman, Jordan.

Caption:
The 18 students enrolled in this year’s initial offering of MIT’s certificate program for refugees were provided with a variety of electronic components and devices to use in their studies of computer and data science.

In Amman, Jordan, last week, a class of students — half of them refugees — began a one-year course of study in computer science and entrepreneurship, designed by MIT. The program will earn them a certificate that, along with internships with local companies throughout the program, could help them advance to better-paying positions in the region.

The new program, launched during a Solve competition at MIT, is called the Refugee Action (ReACT) Certificate Program. Run by Executive Director Robert Fadel, who previously worked for the One Laptop Per Child project (also an MIT spinoff), the program begins with an intensive two-week session of in-person lectures in innovation, design, and entrepreneurship, led by MIT faculty members and students.

The 18 members of the initial class will then spend the remainder of the program taking a series of online classes through MITx and working about 20 hours per week as interns with companies in the region. The project, Fadel says, will “bring an MIT-caliber education to refugees and other displaced populations, where they live.”

Fadel points out that according to figures from the UN High Commissioner for Refugees, only about 1 percent of refugees have access to higher education, compared to a global average of 34 percent, meaning that “hundreds of thousands of university-qualified students are unable to realize their potential.” The new program is a step toward expanding that access.

The initial program was made available to any qualified registered refugees, asylees, or other forcibly displaced people, Fadel says, as well as to qualified citizens of Jordan. The organizers made extra efforts to promote the program to women, and because access to records can be difficult for displaced people, applying to the program does not require transcripts or standardized test scores.

The program includes five online courses — two in computer science, and one each in data science, innovation, and leadership. The courses will be taught by a combination of MIT faculty and students, both live and on the edX platform.

The concept was initially created under the leadership of Admir Masic, the Esther and Harold E. Edgerton Career Development Professor in the Department of Civil and Environmental Engineering, who as a child was a refugee from Bosnia and Herzegovina whose family fled to a refugee camp in Croatia. He then lived in Germany and Italy, where he earned his college degrees. “I know firsthand that a good education is the ticket to a better life,” he says.

This initial program drew about 500 applicants, from 20 nations, including some as far from Jordan as Brazil and Japan. To make up for the lack of formal transcripts, the applicants were given special tests in math and English in order to qualify. They also submitted videos in which they described what they would do with a $100,000 investment if it were offered. The selected students came from four areas: Jordan, Syria, Lebanon, and the Occupied Territories. The initial class is composed of 50 percent women, as the organizers had hoped.

The inclusion of internships for all the students, Fadel says, “is critical in providing practical training. It means they can demonstrate what they’re learning in their classes in the workplace right away.”

After this initial year, Fadel says, the hope is that the program will expand, in both the number of students accepted and the locations where it is offered. Already, he says, “we’ve gotten tremendous support from the MIT community.”

At the kickoff two-week session in Amman, students are working both individually and in teams, with activities including using a maker lab, working with coding architecture, and participating in design and innovation workshops, soft-skills seminars, and industry panels. They are also familiarizing themselves with the edX platform they will be using, and getting to know the instructors.

As the year goes on, many of the students will be able to stay in touch and share experiences through local centers where they can work and study together. Others who are not in close proximity will be able to connect through a dedicated Facebook page, Fadel says.

“What we’re really doing is offering the students an opportunity to sharpen their skills in computer and data science, but also in innovation and how to be entrepreneurial,” Fadel says.

Improving educational opportunities for refugee youth around the world