How much does infrastructure boost an economy? 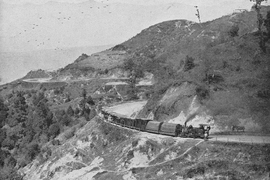 Before 1870, India barely had railroads. It didn’t have many canals either, and only a small percentage of the population lived along the three main rivers. So when goods needed to be transported, people used steer, which could pull freight about 20 miles per day.

But the British, India’s colonial rulers, started building rail lines, and then built some more. By 1930, there were more than 40,000 miles of railroads in India, and goods could be shipped about 400 miles a day.

The result? As MIT economist David Donaldson shows in a newly published study on the economic impact of building infrastructure, railroads fostered commerce that raised real agricultural income by 16 percent.

“It shows that in the places where the railroad arrived in India, living standards improved,” says Donaldson, a professor in MIT’s Department of Economics.

Donaldson’s paper on the subject, “Railroads of the Raj: Estimating the Impact of Transportation Infrastructure,” just published in the American Economic Review, may also speak to the importance of infrastructure more broadly. After all, as he notes in the paper, about 20 percent of World Bank lending in the developing world goes to infrastructure projects. And in the United States, debate rolls on about the value of building and refurbishing America’s roads, bridges, railroads, ports, and airports.

And while every country is different, and circumstances change over time, Donaldson’s research suggests that the growth India experienced as its railroads grew was specifically the result of increased trade, a general finding that could be applied to other countries and other eras.

“Phantom lines” and the failure of growth

The introduction of railroads to India — then consisting of modern-day India, Pakistan, and Bangladesh — started in 1853, but 98 percent of India’s existing rail lines were built from 1870 to 1930. Using archival records never before quantified in a single study — including information on trade, prices, and output — Donaldson first charted the growth of tracks in 235 geographic districts. He then tallied the growth in trade among those districts, as well as the growth of international trade originating in those areas.

Looking at 17 different crops that accounted for 93 percent of the farmed area in India in 1900, Donaldson analyzed annual income-per-acre statistics for all the agricultural goods, while accounting for factors such as rainfall data when estimating agricultural productivity.

In all, the growing presence of railroads reduced the cost of trade, lowered price gaps among regions, and increased the amount of goods being traded.

In his study, Donaldson anticipates multiple caveats to his conclusion. For instance: What if the railroads were built in areas that would have grown anyway? To address this, he studied what happened in regions where the British planned but did not build about 40,000 miles of rail lines — “phantom lines,” as he calls them.

“It could have been that planners were just good at forecasting growth, and they just put railroads in places that were going to take off anyway,” Donaldson says. “In that case, these correlations would not indicate causation. But it is reassuring to see that in the places that they chose but then decided not to build in, for a range of pretty idiosyncratic reasons, you don’t see systematic changes in economic activity around the time those railroad lines would have been built.”

In those cases, the lack of rails apparently constrained growth; even in areas where railroads were constructed for military reasons, trade grew.

Another question is whether growth stemmed from the increased capacity to exchange goods, or whether it was, say, the spread of technical knowledge enabled by improved transport that made the difference. Donaldson’s data show that across India, changes in openness to trade closely track the arrival of the railroads, while other kinds of technological changes do not, and do not link to growth in a discernible way.

“There are other effects railroads could have had,” Donaldson says. “But when you parse it, it looks like enhanced trade openness played an important part in the way that railroads affected living standards.”

India’s past, our present?

Even before its formal publication, “Railroads of the Raj” has had a significant impact in its field. Donaldson was awarded the 2017 John Bates Clark Medal in economics — granted by the American Economic Association (AEA) to the best scholar under the age of 40 — partly on the basis of the paper’s research.

“This paper is widely viewed as both a methodological breakthrough and substantively important paper in the field,” the AEA noted in its 2017 citation of Donaldson’s work.

Still, as Donaldson readily acknowledges, it is an open question how broadly one can apply such findings. Do changes in India’s infrastructure many decades ago bear on the world today? He points out that every episode of growth we can study is historical, so studying the matter can shed light on economic mechanisms that might apply today.

“There is some debate about the difference between economics and economic history,” Donaldson says. “But I don’t really see much of a distinction. History is full of interesting episodes that we can learn from, and if you want to look at data, as I think we should, then you’re always going to be looking at the past.”

Moreover, as Donaldson notes, because his study identifies a particular role for trade as a driver of growth, we can try to evaluate analogous projects today — roads, ports, and more — in terms of potential trade impact, even if those forms of transport are different.