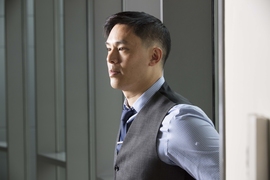 A few years ago, Eric So and a co-author finished a working paper about corporate earnings announcements and posted it on the Social Science Research Network (SSRN). They had found something striking: Corporations telegraph the content of their quarterly financial results via the timing of their earnings announcements.

That is, publicly traded companies have a window of time to announce each quarter’s financials. If they set up an announcement early in that period, it means a good earnings report; if the announcement is scheduled for late in the period, it suggests relatively bad news is on the way. For stock traders, that’s a great insight, as the response to So’s paper confirmed.

“I posted it on SSRN at around three o’clock on a Thursday, and by the end of the day Friday, I had 10 invitations to present at hedge funds,” says So.

That doesn’t happen every time So releases a piece of research, but it does underscore the way his work crosses institutional boundaries. So is the Sarofim Family Career Development Professor in the MIT Sloan School of Management, where he resides in the school’s accounting group. But for So and his colleagues in the group, accounting is a tool for exploring large-scale financial issues.

“I study how accounting information can inform investment decisions, can inform companies’ pricing, and [aims] to really solve a practical goal, to help understand the science of active investing,” says So, referring to investors who actively manage funds as opposed to creating index funds intended to track markets as a whole. “A lot of my research really focuses on … the idea that active investing is potentially profitable as an ongoing business enterprise.”

As a student, So majored in economics as an undergraduate at the University of Maryland, received an MA in economics from Cornell University, and earned his PhD from Stanford University in 2012. He was hired directly onto the MIT faculty that same year. For his research and teaching, So was granted tenure at MIT Sloan this spring.

For all his academic credentials, a key experience in So’s career came in between his MA and PhD programs, when he worked for two years as a research analyst for the Nasdaq stock exchange, conducting studies across a broad array of market issues.

“I became really interested in the intersection of accounting and finance,” So recalls. His tenure as Nasdaq followed “some of the largest accounting scandals that we’ve seen in the several past decades,” he says, referencing the corporate sandals involving Enron, WorldCom, Tyco, and more. “There was clear reliance on accounting information that led investors astray.”

So’s research has explored a broad array of topics concerning the uses of information to decode the status of publicly traded companies, synthesized in his 2015 book, “Alphanomics: The Informational Underpinnings of Market Efficiency,” co-written with Charles M.C. Lee.

For instance, suppose a relatively large portion of investors are taking out options on a company’s stock — which means investors can buy that stock but are not obligated to do so. So has found that this is a useful way to indirectly grasp what kinds of privately held information about the company are swirling around among investors. In this case, it strongly signals an upcoming drop in the firm’s stock price.

“When there’s a lot of volume in options markets relative to equity markets, it tends to signal bad news, and we find it has very strong predictive power in the cross-section of stock returns,” So says. “There’s a very clear practical implication, which is, from a stock selection perspective, it’s better to bet against stocks with high option volume relative to equity volume.”

For instance: Investors such as hedge funds cannot necessarily re-deploy their capital to take advantage of every perceived market opportunity, because they have already attracted investors on the basis of clearly formulated approaches to investing. Those strategies cannot be instantly thrown out the window. Giving talks to hedge funds, So says, has helped him fully grasp the influence of factors such as these in market behavior.

“One of my overarching goals as a researcher is to help bridge the theory and practice of active investing,” he says. “Engaging with the private sector, I’ve learned so much about these details … that make such a big difference.”

As much as So engages with investors, he feels at home in the Institute and is effusive about his colleagues.

“We’re very fortunate to have what I believe is the very best research group in accounting in the world,” says So. He also raves about the quality of students he teaches in the classroom.

“I have been nothing short of thrilled with the MBA students we have at Sloan,” says So. “They are not only technically capable, but humble and hard-working.”

So observes that accounting gets a bad rap as a subject that is supposedly dull. However, he emphasizes, it’s really an essential tool of business.

“They [the students] understand that accounting is often viewed as a very dry topic … but what we try to teach them is that accounting is not only critical as a language of business, but it is a very useful skillset to know any time you’re thinking about investing in another company, or investing your own money. There’s a very strong practical purpose.” He adds: “If students can step aside from the branding problem that accountants have, they see that it is not only extremely interesting, it’s quite powerful.”