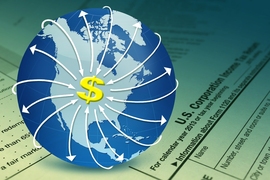 Tax evasion is widely assumed to be an eternal problem for governments — but how widespread is it? For the first time, a new study, co-authored by an MIT professor, has put a cost on a particular kind of tax evasion, known as “round-tripping,” that the U.S. government has been trying to thwart.

In round-tripping, U.S. investors move funds to offshore tax havens, then invest in U.S. equity and debt markets with these “foreign” funds. In essence, the U.S. investors are disguising themselves as foreign investors, who are not subject to the same tax rates on capital gains and interest income. The money is said to have made a “round trip” since it originates in the U.S., and winds up back in U.S. markets.

According to the study, published in the Journal of Finance, every 1 percent increase in the top U.S. tax rate leads to an increase of 2.1 percent to 2.8 percent in foreign portfolio investment (FPI) from tax havens. As of 2008, some $34 billion to $109 billion of FPI from those havens appears to have been invested in the U.S. via round-tripping, leading to a loss of $8 billion to $27 billion in tax revenue.

“The higher the tax rate, the more securities appear to be purchased from tax haven jurisdictions,” says Michelle Hanlon, a professor of accounting at MIT. “This seems to indicate that U.S. individuals are pretending to be foreigners who then invest in the U.S. markets.”

Hanlon and her co-authors have presented their findings to the staff of the U.S. Senate’s Permanent Subcommittee on Investigations, among other groups interested in the results.

A subtle strategy for identifying evaders

To be sure, not all investments from tax havens are dubious, so the study employed a multiprong strategy. First, it looked at changes in investment levels from tax havens after changes in U.S. tax rates. Second, the study evaluated these changes in investment with an eye to whether or not the U.S. has a bilateral Tax Information Exchange Agreement (TIEA) with the offshore sovereignty in question. TIEAs potentially allow the U.S. to find out considerably more information about the investments being made from those locations.

Sure enough, the researchers found that there is a decrease of up to 32 percent, in both equity and debt investments, when the U.S. creates a TIEA with other sovereign parties.

“The reverse effect we see is that when the U.S. enters into an exchange agreement, we see less investment from tax havens,” adds Hanlon, who is the Howard W. Johnson Professor of Accounting at the MIT Sloan School of Management.

To be clear, Hanlon says, “It’s very hard to identify tax evasion, because obviously people are trying to hide it.” However, she adds, “Once we started seeing the data, we realized we could try to tackle this problem. We had to do a lot of tests to try to isolate the effect we’re looking for, [and] we think it’s a big step to try to put some numbers around this phenomenon.”

The conclusions come from data collected by both the U.S. Federal Reserve and the U.S. Treasury, which allowed the researchers to piece together monthly flows of foreign investment into U.S. equity and debt markets.

Scholars in finance and tax policy say they are impressed by the research. “While this tax evasion has been going on for a long time, the paper is very timely,” says Campbell R. Harvey, a professor of finance at Duke University. The study, he adds, is the kind of “research that impacts both the way we think as academics and has reverberations on Capitol Hill.”

Jeffrey Hoopes, a lecturer in accounting at Ohio State University, notes that the study provides useful, practical insight into the bottom-line impact of tax-code changes, given that investors may evade some of the revenue the U.S. expects to receive. “There is an old saying that to improve upon something, it is useful to be able to measure it,” Hoopes says. “Given that round-tripping occurs, it is very useful to know what the effect of an increase in the capital gains tax rate would be on this evasive behavior.”

Hanlon suggests that greater international cooperation will at least make this type of tax evasion more difficult and riskier. Additional TIEAs, for instance, would force some investors to go to greater lengths to engage in round-tripping.

“People always try to evade taxes, but [more TIEAs] will make it harder,” Hanlon suggests. “And the more costly and risky it becomes, the costs will outweigh the benefits, at least on the margin, and the less likely people are to do it.”

On the academic front, Hanlon recognizes that the study’s findings present a wide range for the total cost of this tax evasion, but hopes the paper will be a spur to other scholars who may want to delve into the same topic.

“We felt it was important enough that someone try to do research like this, to get people thinking about other data sources and other ways to examine [tax evasion],” Hanlon says. “Our hope was that it would lead to more research and that people would take more risks to look at things like this.”

Boston Business Journal’s Mary Moore writes that, “A researcher from the Massachusetts Institute of Technology’s Sloan School of Management has measured the billions of dollars in tax payments that U.S taxpayers are avoiding, using offshore accounts and through an investment scheme known as ‘round tripping’.”