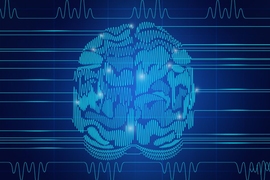 Caption:
MIT neuroscientists have found evidence that the brain’s ability to control what it’s thinking about relies on low-frequency brain waves known as beta rhythms.

MIT neuroscientists have found evidence that the brain’s ability to control what it’s thinking about relies on low-frequency brain waves known as beta rhythms.

“The beta rhythm acts like a brake, controlling when to express information held in working memory and allow it to influence behavior,” says Mikael Lundqvist, a postdoc at MIT’s Picower Institute for Learning and Memory and the lead author of the study.

Earl Miller, the Picower Professor of Neuroscience at the Picower Institute and in the Department of Brain and Cognitive Sciences, is the senior author of the study, which appears in the Jan. 26 issue of Nature Communications.

There are millions of neurons in the brain, and each neuron produces its own electrical signals. These combined signals generate oscillations known as brain waves, which vary in frequency. In a 2016 study, Miller and Lundqvist found that gamma rhythms are associated with encoding and retrieving sensory information.

They also found that when gamma rhythms went up, beta rhythms went down, and vice versa. Previous work in their lab had shown that beta rhythms are associated with “top-down” information such as what the current goal is, how to achieve it, and what the rules of the task are.

All of this evidence led them to theorize that beta rhythms act as a control mechanism that determines what pieces of information are allowed to be read out from working memory — the brain function that allows control over conscious thought, Miller says.

“Working memory is the sketchpad of consciousness, and it is under our control. We choose what to think about,” he says. “You choose when to clear out working memory and choose when to forget about things. You can hold things in mind and wait to make a decision until you have more information.”

To test this hypothesis, the researchers recorded brain activity from the prefrontal cortex, which is the seat of working memory, in animals trained to perform a working memory task. The animals first saw one pair of objects, for example, A followed by B. Then they were shown a different pair and had to determine if it matched the first pair. A followed by B would be a match, but not B followed by A, or A followed by C. After this entire sequence, the animals released a bar if they determined that the two sequences matched.

The researchers found that brain activity varied depending on whether the two pairs matched or not. As an animal anticipated the beginning of the second sequence, it held the memory of object A, represented by gamma waves. If the next object seen was indeed A, beta waves then went up, which the researchers believe clears object A from working memory. Gamma waves then went up again, but this time the brain switched to holding information about object B, as this was now the relevant information to determine if the sequence matched.

However, if the first object shown was not a match for A, beta waves went way up, completely clearing out working memory, because the animal already knew that the sequence as a whole could not be a match.

“The interplay between beta and gamma acts exactly as you would expect a volitional control mechanism to act,” Miller says. “Beta is acting like a signal that gates access to working memory. It clears out working memory, and can act as a switch from one thought or item to another.”

Previous models of working memory proposed that information is held in mind by steady neuronal firing. The new study, in combination with their earlier work, supports the researchers’ new hypothesis that working memory is supported by brief episodes of spiking, which are controlled by beta rhythms.

“When we hold things in working memory (i.e. hold something ‘in mind’), we have the feeling that they are stable, like a light bulb that we’ve turned on to represent some thought. For a long time, neuroscientists have thought that this must mean that the way the brain represents these thoughts is through constant activity. This study shows that this isn’t the case — rather, our memories are blinking in and out of existence. Furthermore, each time a memory blinks on, it is riding on top of a wave of activity in the brain,” says Tim Buschman, an assistant professor of psychology at Princeton University who was not involved in the study.

In a study that recently appeared in the journal Neuron, they found similar patterns of interaction between beta and gamma rhythms in a different task involving assigning patterns of dots into categories. In cases where two patterns were easy to distinguish, gamma rhythms, carrying visual information, predominated during the identification. If the distinction task was more difficult, beta rhythms, carrying information about past experience with the categories, predominated.

In a recent paper published in the Proceedings of the National Academy of Sciences, Miller’s lab found that beta waves are produced by deep layers of the prefrontal cortex, and gamma rhythms are produced by superficial layers, which process sensory information. They also found that the beta waves were controlling the interaction of the two types of rhythms.

“When you find that kind of anatomical segregation and it’s in the infrastructure where you expect it to be, that adds a lot of weight to our hypothesis,” Miller says.

The researchers are now studying whether these types of rhythms control other brain functions such as attention. They also hope to study whether the interaction of beta and gamma rhythms explains why it is so difficult to hold more than a few pieces of information in mind at once.

“Eventually we’d like to see how these rhythms explain the limited capacity of working memory, why we can only hold a few thoughts in mind simultaneously, and what happens when you exceed capacity,” Miller says. “You have to have a mechanism that compensates for the fact that you overload your working memory and make decisions on which things are more important than others.”

The research was funded by the National Institute of Mental Health, the Office of Naval Research, and the Picower JFDP Fellowship.

A new glimpse into working memory