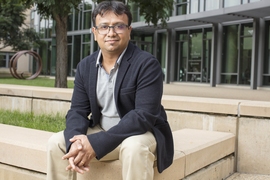 ↓ Download Image
Caption: “Pretty much my entire family, we are entrepreneurs. ... The notion of academia was completely foreign to me growing up,” says Associate Professor Nemit Shroff.
Credits: Image: M. Scott Brauer

Caption:
“Pretty much my entire family, we are entrepreneurs. ... The notion of academia was completely foreign to me growing up,” says Associate Professor Nemit Shroff.
Credits:
Image: M. Scott Brauer

The U.S. has some distinctive rules about the financial disclosures of corporations. For instance: Private companies, which make up more than half of the economy, do not have to disclose much information at all. But public companies — those with shares trading on exchanges — have extensive disclosure rules. Around the world, only a few other countries have similar systems.

This creates an asymmetrical situation within some industries. If some companies have to disclose a lot of information about themselves and others do not, does it create an advantage for the firms that get to examine their peers and rivals without being subject to the same scrutiny?

Nemit Shroff’s research shows that it does. Shroff, the Class of 1958 Career Development Associate Professor at the MIT Sloan School of Management, is an accounting expert who studies the effect of information on executives; he looks at how well or poorly firms allocate capital, depending on the information they have available to them.

“I focus on investment decisions because it’s one of the fundamental drivers of value,” Shroff says. Through a series of carefully designed studies, he has arrived at some answers.

“What we find is that private companies make better decisions when they operate in industries that have public firms,” Shroff notes. Referring to the disclosures that publicly traded firms make, he adds, “That information not only informs the investors in that company, it also informs other stakeholders in other companies what’s going on in an industry, what’s going on at the economy level.”

Shroff’s research thus opens up an array of other questions, including: What should accounting policies be, if having more information tends to lead to better growth outcomes? For his work in the field, Shroff was recently awarded tenure at MIT.

A family of entrepreneurs

Shroff grew up in India, where becoming a professor was something he never considered until he reached college.

“Pretty much my entire family, we are entrepreneurs,” Shroff says. “They have their own businesses, my grandfather, all my cousins, my father, my uncle, pretty much everyone is an entrepreneur. The notion of academia was completely foreign to me growing up.”

That was true even as Shroff received his undergraduate degree in accounting from Sydenham College at Mumbai University and then moved on to get his MBA at Amrita School of Business in Coimbatore.

As Shroff puts it, he “started getting interested in public companies” and asking a lot of questions in class about finance and markets — to the point where a professor encouraged him to think about pursuing his queries as formal research topics.

“He told me, ‘The kind of things you’re interested in, they’re things you do if you’re an academic,’” Shroff says. “He encouraged me a lot.” Soon Shroff was applying to PhD programs in the U.S. — “I had little to lose, so I thought I would give it a shot” — and wound up at the University of Michigan, where he got his PhD in business administration, focusing on accounting, in 2011.

Shroff joined the MIT faculty straight from Ann Arbor and has remained at the Institute ever since. He was promoted to associate professor in 2015 and then tenured this spring. And Shroff has found a home at MIT not just as a researcher, but in the classroom; he raves about MIT Sloan students.

“They’re very respectful, very smart, and it’s a joy to get to know them,” Shroff says. “It’s remarkable how accomplished they are.”

Pros and cons of going public

As a researcher, Shroff’s work has helped show not only that more information helps managers, but more specifically, how it helps. One of the crucial mechanisms at work, Shroff notes, is precisely that it helps executives judge the size of the markets they are in.

“You can come up with more precise estimates of the demand for a product or service,” Shroff says. “It can reduce uncertainty. … [and] will increase confidence in whatever decision [you] make.

For public firms, conversely, he notes that “those disclosures could make you lose your competitive edge.” That said, this information imbalance is only one of the factors that weigh in corporate decisions to go public or stay private, including access to capital, corporate control, and more.

Shroff has found at least one previously underrated benefit for publicly held firms that disclose more information: The more rigorous work that goes into public disclosure practices can help firms learn about themselves and operate more effectively, a conclusion he makes in a recently completed paper.

‘The compliance process actually gives them information that’s relevant for their decisions,” Shroff says. “When you comply with new rules, it forces you to collect new information.”

Inevitably, the question of how the U.S. should structure its disclosure rules remains a political question in many regards. Still, Shroff says, he hopes his work, and that of others in his field, can inform the discussion, especially by demonstrating the overall utility of data and its effects on economic efficiency.

“There is social value to this information,” Shroff says.