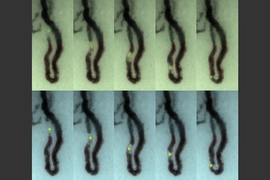 ↓ Download Image
Caption: MIT researchers have developed a way to measure white blood cell levels by imaging the cells as they flow through capillaries at the base of the fingernail. In these images, the white blood cells are marked by crosses.
Credits: Image: MIT/The Leuko Project

Caption:
MIT researchers have developed a way to measure white blood cell levels by imaging the cells as they flow through capillaries at the base of the fingernail. In these images, the white blood cells are marked by crosses.
Credits:
Image: MIT/The Leuko Project

One of the major side effects of chemotherapy is a sharp drop in white blood cells, which leaves patients vulnerable to dangerous infections. MIT researchers have now developed a portable device that could be used to monitor patients’ white blood cell levels at home, without taking blood samples.

Such a device could prevent thousands of infections every year among chemotherapy patients, the researchers say. Their tabletop prototype records video of blood cells flowing through capillaries just below the surface of the skin at the base of the fingernail. A computer algorithm can analyze the images to determine if white blood cell levels are below the threshold that doctors consider dangerous.

“Our vision is that patients will have this portable device that they can take home, and they can monitor daily how they are reacting to the treatment. If they go below the threshold, then preventive treatment can be deployed,” says Carlos Castro-Gonzalez, a postdoc in MIT’s Research Laboratory of Electronics (RLE) and the leader of the research team.

In a paper appearing in Scientific Reports, the researchers showed that the device could accurately determine whether white blood cell levels were too low, in a study of 11 patients undergoing chemotherapy.

The researchers' prototype device, at right, can image through the skin at the base of the fingernail to generate video of white blood cells flowing through capillaries (left).

Aurélien Bourquard, a member of the research team, watches white blood cells flow through capillaries located at the base of the fingernail.

The researchers began this project nearly four years ago as part of the Madrid-MIT M+Vision Consortium, which is now part of MIT linQ. The program draws postdocs from around the world to try to solve problems facing doctors and hospitals. In this case, the research team visited the oncology department of a Madrid hospital and found that low white cell levels in patients were making them susceptible to life-threatening infections.

“In the U.S., one in six chemotherapy patients ends up hospitalized with one of these infections while their white cells are particularly low,” Castro-Gonzalez says. Those infections lead to long, expensive hospital stays and are fatal in about 7 percent of cases. The patients also have to miss their next chemotherapy dose, which sets back their cancer treatment.

The MIT team estimated that if there were a way to detect when patients’ white cell counts went below the threshold level, so they could be treated with prophylactic antibiotics and drugs that promote white blood cell growth, about half of the 110,000 infections that occur in chemotherapy patients in the United States every year could be prevented.

The technology the researchers used to tackle this problem consists of a wide-field microscope that emits blue light, which penetrates about 50 to 150 microns below the skin and is reflected back to a video camera. The researchers decided to image the skin at the base of the nail, known as the nailfold, because the capillaries there are located very close to the surface of the skin. These capillaries are so narrow that white blood cells must squeeze through one at a time, making them easier to see.

The technology does not provide a precise count of white blood cells, but reveals whether patients are above or below the threshold considered dangerous — defined as 500 neutrophils (the most common type of white blood cell) per microliter of blood.

In the Scientific Reports study, the researchers tested the device in 11 patients at Massachusetts General Hospital and University Hospital La Paz in Madrid, at various points during their chemotherapy treatment. The approach proved 95 percent accurate for determining whether a patient’s white cell levels were above or below the threshold.

To obtain enough data to make these classifications, the researchers recorded one minute of video per patient. Three blinded human assistants then watched the videos and noted whenever a white blood cell passed by. However, since submitting their paper, the researchers have been developing a computer algorithm to perform the same task automatically.

“Based on the feature-set that our human raters identified, we are now developing an AI and machine-vision algorithm, with preliminary results that indicate the same accuracy as the raters,” Bourquard says.

The research team has applied for patents on the technology and has launched a company called Leuko, which is working on commercializing the technology with help from the MIT Innovation Initiative, the MIT Deshpande Center for Technological Innovation, the MIT Sandbox Innovation Fund, the Martin Trust Center for Entrepreneurship, the MIT Translational Fellows Program, and the MIT Venture Mentoring Service.

“Having a noninvasive method that allows you, in a short period of time, to see how many white blood cells are in a given patient would be quite an improvement,” says Brugnara, who was not involved in the research.

To help move the technology further toward commercialization, the researchers are building a new automated prototype. “Automating the measurement process is key to making a viable home-use device,” Butterworth says. “The imaging needs to take place in the right spot on the patient’s finger, and the operation of the device must be straightforward.”

Using this new prototype, the researchers plan to test the device with additional cancer patients. They are also investigating whether they can get accurate results with shorter lengths of video.

They also plan to adapt the technology so that it can generate more precise white blood cell counts, which would make it useful for monitoring bone marrow transplant recipients or people with certain infectious diseases, Castro-Gonzalez says. This could also make it possible to determine whether chemotherapy patients can receive their next dose before 21 days have passed.

“There is a balancing act that oncologists must do,” says Sanchez-Ferro. “Normally doctors want to make chemotherapy as intensive as possible but without getting people too immunosuppressed. Current 21-day cycles are based on statistics of what most patients can take, but if you are ready early, then they can potentially bring you back early and that can translate into better survival.”