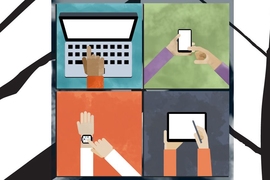 Analyzing people’s keystrokes as they type on a computer keyboard can reveal a great deal of information about the state of their motor function, according to a new study from MIT.

In a paper appearing in Scientific Reports, the researchers found that their algorithm for analyzing keystrokes could distinguish between typing done in the middle of the night, when sleep deprivation impairs motor skills, and typing performed when fully rested.

The study, which grew out of the Madrid-MIT M+Vision Consortium, is based on the premise that “there might be hidden information in the way that we type,” says Ian Butterworth, one of the authors and an M+Vision fellow. “At the moment, pretty much all of the other information in typing is thrown out. We just pay attention to what keys are being pressed, not when or for how long.”

While this study focused on the effects of fatigue, it also represents a first step toward using keystroke patterns to diagnose conditions that impair motor function, such as Parkinson’s disease, much earlier than is now possible, the researchers say.

Preliminary results from a study of about two dozen Parkinson’s patients suggest that the researchers’ algorithm for analyzing keystrokes can also distinguish people who have the disease from those who don’t. The team is now planning a larger study of Parkinson’s patients.

M+Vision fellows Luca Giancardo, Alvaro Sanchez-Ferro, and Carlos Sanchez Mendoza are also authors of the paper, along with Jacob Hooker, an associate professor of radiology at Harvard Medical School.

“Window into the brain”

Many factors can interfere with motor ability, including sleep deprivation, which reduces dexterity. For the Scientific Reports study, the MIT team designed a computer algorithm that can capture timing information from computer keystrokes, allowing the researchers to detect patterns that distinguish typing that occurs when motor skills are impaired.

Keystroke patterns have been used previously as a biometric signature to identify individuals for security purposes, but this is the first time that scientists have tried to extract diagnostic information from typing. The primary feature that the researchers analyzed is known as “key hold time” — a measure of how long a key is pressed before being released.

To gather the data, the researchers created a plug-in software component that could be incorporated into a web browser to capture keystrokes; it does not capture the content of what is being typed. The team is also working on smartphone apps that could be used to gather the same kind of data from mobile devices.

“We thought this was a unique opportunity to have a window into the brain using your normal interactions with an electronic device,” Sanchez-Ferro says.

Sanchez Mendoza adds, “You already have the hardware. You just have to let someone evaluate the information you collect every day when you use the device, and try to pull it out for health-related purposes.”

For the sleep deprivation study, the researchers recruited 14 healthy volunteers from around MIT and had them type a randomly chosen Wikipedia article. The participants were then told that they would be awakened during the night to type another article. Participants were awakened 70 to 80 minutes after going to sleep, when they should be in the deepest part of their sleep cycle.

The researchers found that after the late-night awakening, students’ keystrokes showed much more variation in timing, as opposed to the typing they did when alert, which was very consistent in its timing.

This approach could also be applicable to Parkinson’s disease, a degenerative neurological disorder that kills dopamine-producing cells in the brain’s substantia nigra, leading to tremors, slowness of movement, and difficulty walking.

Preliminary results from a study of 21 Parkinson’s patients and 15 healthy subjects suggest that there is greater variation in the keystrokes of Parkinson’s patients than in control subjects, Sanchez-Ferro says. If the findings are validated in larger studies, the researchers believe this approach could lead to earlier diagnosis for Parkinson’s and aid in the development of better treatments. Currently, there is no way to diagnose Parkinson’s in early stages of the disease.

“People are usually diagnosed five to 10 years after the beginning of the disease, and lot of the damage has already been done,” says Giancardo, the paper’s first author, who is also supported by the MIT Translational Fellows Program.

John Growdon, director of the Memory and Movement Disorders Unit at Massachusetts General Hospital, says it will be important for the researchers to demonstrate in future studies that the typing deficiencies correlate with the severity of Parkinson’s disease and that they appear early enough to offer a significant improvement in diagnosis.

“Overall, it strikes me that this has great potential to detect subtle motor impairments even in advance of a clinician’s ability to find them,” adds Growdon, who was not involved in the study.

The researchers believe this strategy could also be used to evaluate patients with other diseases that affect motor skills, such as rheumatoid arthritis. “This might have applications in any disease producing a motor impairment, whether it’s in your hands and muscles or the brain,” Sanchez-Ferro says.

The research was funded by the Community of Madrid.

In a Scientific American podcast, Cynthia Graber examines MIT research showing typing speed can indicate if a person is fatigued and can help diagnose certain diseases. Typing speed could be used as a “safety feature on software programs for night shifts” or could diagnose Parkinson’s “by tracking changes in someone’s ability to manipulate the common keyboard.”

Researchers at MIT have developed software that tracks typing speed in order to help diagnose Parkinson’s disease, writes Alexandra Ossola for Popular Science. Ossola explains that the researchers "hope that this type test could eventually lead to earlier diagnoses of Parkinson’s.”