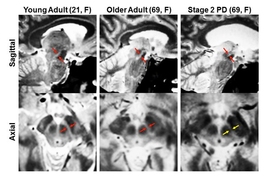 The technique, which combines several types of magnetic resonance imaging (MRI), could allow doctors to better monitor patients’ progression and track the effectiveness of potential new treatments, says Suzanne Corkin, MIT professor emerita of neuroscience and leader of the research team. The first author of the paper is David Ziegler, who received his PhD in brain and cognitive sciences from MIT in 2011.

The study, appearing in the Nov. 26 online edition of the Archives of Neurology, is also the first to provide clinical evidence for the theory that Parkinson’s neurodegeneration begins deep in the brain and advances upward.

“This progression has never been shown in living people, and that’s what was special about this study. With our new imaging methods, we can see these structures more clearly than anyone had seen them before,” Corkin says.

Parkinson’s disease currently affects 1 to 2 percent of people over 65, totaling five million people worldwide. The disease gradually destroys the brain cells that control movement, leaving most patients wheelchair-bound and completely dependent on caregivers. “A major obstacle to research on the causes and progression of this disease has been a lack of effective brain imaging methods for the areas affected by the disease,” Ziegler says.

In 2004, Heiko Braak, an anatomist at Johann Wolfgang Goethe University in Frankfurt, Germany, classified Parkinson’s disease into six stages, based on the appearances of the affected brain structures. He proposed that during the earliest stages, a structure deep inside the brain, known as the substantia nigra, begins to degenerate. This structure is critical for movement and also plays important roles in reward and addiction.

Later, Braak proposed, degeneration spreads outward to a brain region known as the basal forebrain. This area, located behind the eyes, includes several structures that produce acetylcholine, a neurotransmitter important for learning and memory.

Neuropathologists (scientists who study the brains of deceased patients) had found evidence for this sequence of events, but it had never been observed in living patients because the substantia nigra, deep within the brain, is so difficult to image with conventional MRI.

To overcome that, the MIT team used four types of MRI scans, each of which uses slightly different magnetic fields, generating different images. By combining these scans, the researchers created composite images of each patient’s brain that clearly show the substantia nigra and basal forebrain. “Our new MRI methods provide an unparalleled view of these two structures, allowing us to calculate the precise volumes of each structure,” Ziegler says.

After scanning normal brains, the researchers studied 29 early-stage Parkinson’s patients. They found significant loss of volume in the substantia nigra early on, followed by loss of basal forebrain volume later in the disease, as predicted by Braak.

The findings appear to correlate with the appearance of symptoms in Parkinson’s patients, says Joel Perlmutter, a professor of neurology at the Washington University School of Medicine. “This suggests that two different systems of the brain — one dopaminergic and associated with motor control, and one cholinergic and associated with cognitive function — have different timing,” Perlmutter says.

In future studies, this MRI technique could be used to follow patients over time and measure whether degeneration of the two areas is correlated or if they deteriorate independently of one another, Corkin says.

This approach could also give doctors a new way to monitor how their patients are responding to treatment, she says. (Most patients are treated with dopamine, which helps to overcome the loss of dopamine-producing neurons in the substantia nigra.) Researchers could also use the new imaging tools to determine the effects of potential new treatments.