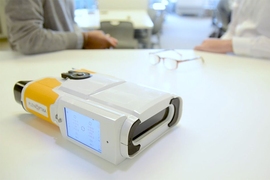 ↓ Download Image
Caption: MIT spinout PlenOptika has developed a highly accurate, portable autorefractor called QuickSee that measures refractive errors of the eye. Users peer into the viewing end and stare at an object in the distance. A technician taps a green arrow on a digital screen to start the measurement and, in about 10 seconds, a prescription estimate pops up on the screen. More affordable than the current technology, the device has potential to reach patients in previously inaccessible areas of developing countries.

Caption:
MIT spinout PlenOptika has developed a highly accurate, portable autorefractor called QuickSee that measures refractive errors of the eye. More affordable than the current technology, the device has potential to reach patients in previously inaccessible areas of developing countries.

Getting eyeglasses prescriptions is especially difficult in developing countries. Optometrists are generally located in urban centers and rarely see patients from rural areas, so many people suffer from uncorrected impairments. According to the World Health Organization, this can lead to impaired quality of life, learning difficulties, and lost employment opportunities and finances.

Now MIT spinout PlenOptika aims to correct this issue with a highly accurate, portable autorefractor that measures refractive errors of the eye and produces estimated prescriptions in 10 seconds. Moreover, it’s more affordable than the current technology, with the potential to reach patients in previously inaccessible areas of developing countries.

After six years of development, eight product iterations, and several clinical studies with a total of 1,500 patients across five countries, the device, called QuickSee, has hit the market in India.

“People at the bottom of the pyramid have poor vision, because they don’t have glasses or aren’t aware of how to get glasses. It’s a big unmet medical need we’re trying to address,” says Shivang Dave, one of four former postdocs at the Madrid-MIT M+Visión Consortium (now MIT LinQ), along with Daryl Lim, Eduardo Lage, and Nicholas Durr.

In a 708-patient study conducted in 2015 with an early prototype, about 85 percent of patients saw with 20/20 vision after being given glasses using the device’s measurement, compared to 91 percent of those who were tested using the optometrist-based gold-standard method. (An abstract of this study was accepted at a premier vision research conference this year). Although not perfect, this data has excited nongovernmental organizations (NGOs) that work on vision care, some of which have piloted later versions of the QuickSee.

Traditional autorefractors are table-sized, heavy, stationary machines that can cost up to $15,000. They detect reflections from infrared light shone through the eye to determine the size and shape of a ring at the back of the eye. This provides a baseline for corrective lens prescriptions. Portable autorefractors do exist, but they aren’t very accurate and are still rather pricey, Dave says.

QuickSee runs on a modified version of a wavefront aberrometer, an advanced device used to map the eye prior to LASIK surgery. Light is shined into the eye, reflected off of the retina, and then measured after it passes back through the eye’s lens and cornea. Distortions in the light waves, called aberrations, represent specific vision errors, such as nearsightedness, farsightedness, and astigmatisms. Among other benefits, the method is more precise than traditional autorefraction technology, producing more accurate measurements.

QuickSee resembles a pair of large binoculars. Users peer into the viewing end and stare at an object in the distance. A technician taps a green arrow on a digital screen on the device to start the measurement. In about 10 seconds, the device displays a prescription estimate on the digital screen.

A binocular model, which measures both eyes at once, costs about a third the price of traditional autorefractors and will be sold primarily in the U.S. For India and other developing countries, PlenOptika developed a monocular version to measure one eye at a time, providing equally accurate measurements but costing less than half the price of the binocular version.

In India, and other developing countries, the QuickSee will most likely be sold to hospitals, NGOs, and optometry practices, which can train technicians and community health workers to travel with the device to rural areas and urban slums to administer tests. In the U.S. and other developed nations, the device will most likely be sold privately to optometrists as an alternative to expensive, stationary, or less accurate equipment. Religious organizations and major corporations are also reaching out to the startup. “It’s pretty much the whole gamut of people in eye care looking for the device,” Dave says.

But Dave stresses that PlenOptika isn’t planning to replace optometrists. “We’re disrupting the tool used by optometrists, not optometrists,” he says. From the outset, PlenOptika has worked closely with leading global, health-focused optometrists and ophthalmologists, vision science researchers, and international eye-care NGOs to make sure the technology provided value to these stakeholders.

In 2011, the PlenOptika co-founders were the first cohort of fellows in the Madrid-MIT M+ Visión Consortium under the direction of Martha Gray, the J. W. Kieckhefer Professor of Health Sciences and Technology and a professor of electrical engineering and computer science, and they chose to design a product that could realistically solve a large-scale global problem. “It was an accelerated way to achieve impact, as opposed to doing some basic research and waiting years down the line to have impact,” Dave says.

Lim, who had studied optics as a PhD student at Boston University, knew that poor vision was a major, growing global issue, especially in developing countries, and wanted to develop a solution. Dave, a bioengineer with a background in global health, Durr, another former optics PhD, and Lage, an electrical engineer, joined Lim on the project.

In developing countries, they soon learned, vision correction isn’t just a money issue: Often, people can afford glasses, but there aren’t enough optometrists and portable diagnostic equipment to reach rural areas. “We couldn’t train 100,000 new optometrists, but we could look at the technologies available and re-engineer them to be lower cost and easier to use,” Dave says.

For the hardware components, PlenOptika uses off-the-shelf optical parts and relatively inexpensive electronics that are not engineered to the same precision as medical- and scientific-grade components found in traditional optometric equipment. The startup developed techniques to make up for such hardware shortcomings, including advanced image and data processing algorithms. For instance, a traditional autorefractor requires the operator to manually align each eye precisely to take a measurement. The QuickSee, however, constantly captures data from a patient’s eye, rapidly determining when to capture a measurement and reducing training barriers for technicians. “Your eye is always changing, and we have to know when it’s in the right state to take a measurement,” Dave says.

A “very simple” yet critical design tweak, Dave adds, was designing the device so people could actually look through the viewer to focus on a real object far away. That’s when the eyes relax for ideal measurements. Traditional autorefractors, including portable ones, use an image within the machine and attempt to trick the patient into thinking they’re looking at something far away. “But your brain knows there’s something close by and it doesn’t fully relax the eye,” Dave says.

Estimates are fine for U.S. clinics, where optometrists will use a rough estimate to guide their work, Dave says, “but in the India setting, it has to be as accurate as possible, because there aren’t optometrists available or because someone else is using it.”

Just before launching in 2014, the PlenOptika co-founders landed a student travel grant through the MIT International Science and Technology Initiatives’ MIT-India program to visit hospitals to pitch their device and learn about the market in India. This was a major stepping stone because India has one of the biggest needs for glasses prescriptions in rural areas and urban slums, but it also has some of the best eye-care hospitals in the world. The country became PlenOptika’s target market.

From 2014 to 2017, several clinical studies in the U.S., Spain, and India and other countries validating the technology have been carried out and published in Investigative Ophthalmology and Visual Science and presented at a conference of the Association for Vision Research and Ophthalmology.

Now PlenOptika is focused on ramping up production for its primary and secondary markets. But Dave notes MIT’s entrepreneurial ecosystem was key in helping launch the startup six years ago. The team, then called IOVista, started thinking seriously about commercializing the technology after winning the Segal Family Emerging Markets track prize in the 2012 MIT $100K Entrepreneurship Competition. MIT’s Venture Mentoring Service was especially valuable in offering sage advice on founding a company, iterating business models, fleshing out contracts, and fundraising, as well as connecting with potential partners, Dave says. In fact, Dave still reaches out to the VMS mentors for business and personal advice. “They’ve mentored us on everything,” Dave says. “I can’t say enough good things about the VMS.”