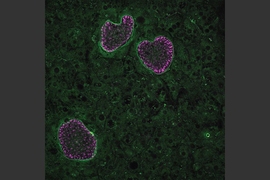 ↓ Download Image
Caption: In this image, four Plasmodium vivax parasites have invaded human hepatocytes. Three of the parasites are developing while one parasite, on the lower right, is a dormant hypnozoite, which remains small until its reactivation.

Caption:
In this image, four Plasmodium vivax parasites have invaded human hepatocytes. Three of the parasites are developing while one parasite, on the lower right, is a dormant hypnozoite, which remains small until its reactivation.

One of the biggest obstacles to eradicating malaria is a dormant form of the parasite that lurks in the livers of some patients. This dormant form is resistant to most antimalarial drugs and can reawaken months or years later, causing disease relapse.

Malaria researchers know little about the biology of these dormant parasites, so it has been difficult to develop drugs that target them. In an advance that could help scientist discover new drugs, MIT researchers have shown they can grow the dormant parasite in engineered human liver tissue for several weeks, allowing them to closely study how the parasite becomes dormant, what vulnerabilities it may have, and how it springs back to life.

After verifying that they had successfully cultivated the dormant form of the parasite, the researchers showed that they could also sequence its RNA and test its response to known and novel antimalarial drugs — both important steps toward finding ways to eradicate the disease.

“After 10 years of hard work, we were able to grow the organism, show it had all the functional hallmarks, perform a drug screen against it, and report the first transcriptome of this elusive form. I’m really excited because I believe it will open the door to both the basic biology of dormancy as well as the possibility of better medicines,” says Sangeeta Bhatia, the John and Dorothy Wilson Professor of Health Sciences and Technology and Electrical Engineering and Computer Science. Bhatia is also a member of MIT’s Koch Institute for Integrative Cancer Research and Institute for Medical Engineering and Science, and the senior author of the study.

Nil Gural, a PhD student in the Harvard–MIT Program in Health Sciences and Technology, is the first author of the paper, which appears in the Feb. 22 issue of the journal Cell Host and Microbe.

MIT researchers captured video of malaria parasites budding off from infected cells. In this image, the parasites are getting ready to emerge from the cell. (Nil Gural)

After a few minutes, the parasites have emerged from the infected cell. (Nil Gural)

Most human cases of malaria are caused by one of two parasite species, Plasmodium falciparum and Plasmodium vivax. Plasmodium vivax, while less deadly, produces dormant forms known as hypnozoites (so called because they are “hypnotized”), and can lead to recurring infections.

In 1991, Aneityum, a small island in the Southwest Pacific, was chosen as a site to test possible measures to eradicate malaria. Researchers sprayed against mosquito larvae and supplied bed nets and malaria medicine across the entire island. These efforts led to the complete eradication of Plasmodium falciparum within a year. In contrast, it took five years to eliminate Plasmodium vivax.

“This dormant form has been seen as the critical barrier to eradication,” Bhatia says. “You can treat the symptoms of vivax malaria by killing all the parasites in the blood, but if hypnozoites linger in someone’s liver, these forms can reactivate and reinfect the blood of a patient. If a mosquito comes along and takes a blood meal, the cycle starts all over again. So, if we want to eradicate malaria, we have to eradicate the hypnozoite.”

The only existing drug that can kill hypnozoites is primaquine, but this drug cannot be used in large-scale eradication campaigns because it causes blood cells to rupture in people with a certain enzyme deficiency.

Bhatia’s team became aware of this problem in 2008, when the World Health Organization and the Bill and Melinda Gates Foundation called for a renewed effort to eradicate malaria, which infects more than 200 million people every year and killed an estimated 429,000 in 2015. Her lab is working with special micropatterned surfaces on which human liver cells can be grown, surrounded by supportive cells. This architecture creates a microenvironment in which human liver cells function much the same way as they do in humans, making it easier to establish, maintain, and study infections of the liver.

Bhatia, who initially used this technology to model hepatitis infections, realized it was also well-suited to studying the liver stage of malaria. She and her malaria team lead, Sandra March, began with Plasmodium falciparum, the strain that can be cultured in lab settings, and found that parasites grown in these liver tissue followed the same life cycle observed in natural infections. They also found that the system could be used to test responses to experimental malaria vaccines.

Following that success, Bhatia’s lab began working with Plasmodium vivax. Efforts to bring the parasite-infected mosquitoes into the United States were unsuccessful, so Gural, the paper’s lead author, traveled to collaborator Jetsumon Prachumsri’s lab in Thailand repeatedly to obtain samples from infected patients and perform the experiments there.

Using their new technology, the researchers showed that they could grow small forms of the parasite that had all of the known features of hypnozoites: persistence, sensitivity to primaquine, and the ability to “wake up” after a few weeks.

Once the researchers were confident that these forms were actually hypnozoites, they set out to do some further studies. First, they obtained six candidate antimalarials now in development and tested them for activity against their Plasmodium vivax samples. They found that none of them could kill established hypnozoites, which was what they had expected based on clinical trials. They now plan to test a larger set of new compounds, working with the nonprofit group Medicines for Malaria Venture, which has a collection of thousands of drug candidates.

Working with scientists at the Swanson Biotechnology Center at the Koch Institute and the Broad Institute of Harvard and MIT, the MIT team performed the first sequencing of the hypnozoite transcriptome. No one had been able to look this closely at hypnozoites before, and RNA sequencing revealed that the dormant forms were not transcriptionally silent, as had been expected, but instead express a different subset of genes than those found in their active counterparts.

“This is a very exciting study,” says Maria Mota, executive director of the Institute for Molecular Medicine at the University of Lisbon. “It provides not only the first transcriptional comparative characterization of replicating schizonts and hypnozoites of P. vivax, but most importantly demonstrates the feasibility of an in vitro platform to study hypnozoites without the need to use animals.”

In future studies, Bhatia, in collaboration with other MIT labs, plans to use single cell RNA-sequencing to identify gene signatures to uncover the signaling pathways that control hypnozoite dormancy and reactivation. The researchers will also study corresponding changes in gene expression of the infected liver cells. This approach could yield potential new drug candidates that would specifically target the dormant forms of the parasite, bringing the field closer to its goal of eradicating malaria. The researchers also hope to identify biomarkers that could be used to diagnose patients who have an otherwise undetectable dormant infection.

The research was funded by the Bill and Melinda Gates Foundation, the Broad Institute of Harvard and MIT, and the Koch Institute Support Grant from the National Cancer Institute.