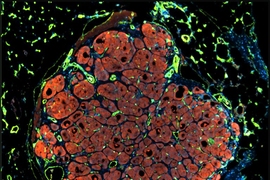 Caption:
Researchers have developed a new way to engineer liver tissue by organizing tiny subunits that contain three types of cells embedded into a biodegradable tissue scaffold. This image shows vascularized engineered human liver tissue that has self-organized into a lobule-like microstructure.

Many diseases, including cirrhosis and hepatitis, can lead to liver failure. More than 17,000 Americans suffering from these diseases are now waiting for liver transplants, but significantly fewer livers are available.

To help address that shortage, researchers at MIT, Rockefeller University, and Boston University have developed a new way to engineer liver tissue, by organizing tiny subunits that contain three types of cells embedded into a biodegradable tissue scaffold. In a study of mice with damaged livers, the researchers found that after being implanted in the abdomen, the tiny structures expanded 50-fold and were able to perform normal liver tissue functions.

“There are just not enough organs to go around. Our goal is that one day we could use this technology to increase the number of transplants that are done for patients, which right now is very limited,” says Sangeeta Bhatia, the John and Dorothy Wilson Professor of Health Sciences and Technology and Electrical Engineering and Computer Science and a member of MIT’s Koch Institute for Integrative Cancer Research and Institute for Medical Engineering and Science.

These engineered livers could also help the millions of people who suffer from chronic liver disease but don’t qualify for a liver transplant, says Bhatia, the senior author of the study, which appears in the July 19 issue of Science Translational Medicine.

“These patients never really are transplant candidates, but they suffer from liver disease, and they live with it their whole lives. In that population you could imagine augmenting their liver function with a small engineered liver, which is an idea we’re pretty excited about,” she says.

The new implantable liver builds on previous work by Bhatia’s lab. In 2011, she developed an engineered tissue scaffold, about the size and shape of a contact lens, that could be implanted into the abdomen of a mouse. There, the liver cells would integrate with the mouse’s circulatory system, allowing it to receive a blood supply and begin performing normal liver functions.

However, those implants contained fewer than 1 million hepatocytes (the cells that perform most of the liver’s critical functions). A healthy human liver has about 100 billion hepatocytes, and Bhatia believes that at least 10 to 30 percent of that number would be necessary to help most patients.

To boost their hepatocyte population, the researchers decided to take advantage of a key trait of liver cells, which is that they can multiply to generate new liver tissue. “The liver is one of the only organs that can regenerate, and it’s the mature cells that divide, without an intermediate stem cell. That’s extraordinary,” Bhatia says.

Working with Christopher Chen, a professor of biomedical engineering at Boston University, Bhatia’s team designed microfabricated structures that incorporate spherical “organoids” made of hepatocytes and fibroblasts, as well as cords of endothelial cells, which are the building blocks of blood vessels. These two types of structures are organized into patterns and embedded into fibrin, a tough protein normally involved in blood clotting.

Once the constructs are implanted into a mouse, they receive regenerative signals from the surrounding environment. These signals, which include growth factors, enzymes, and molecules, are naturally produced when liver damage occurs. These signals stimulate the endothelial cells to form blood vessels and to release factors that stimulate hepatocyte proliferation, resulting in 50-fold expansion of the original tissue.

“The idea is that it’s the seed of an organ, and you organize it in a way that it can be responsive to these regenerative signals, but it’s a minimal unit of what you eventually want to end up with,” Bhatia says. “What’s really exciting about this is that the architecture of the tissue that emerges looks a lot like the liver architecture in the body.”

In this case, the researchers worked with Charles Rice, a virology professor at Rockefeller University, to implant the tissue into mice with a genetic liver disorder called tyrosinemia. When treated with a repair-inducing drug, the livers of these mice begin produce regenerative signals, and the researchers expect that patients receiving the transplants would produce similar signals. They are also looking into the possibility of embedding the implant with additional regeneration-promoting chemicals that they discovered in 2013.

The liver performs hundreds of functions for the body, most of which are related to regulation of metabolism, detoxification of harmful substances, and bile production. Tests of the implanted human livers showed that examples of all of these functions were occurring normally in the host mice.

“This work is very innovative,” says Inder Verma, a professor of molecular biology at the Salk Institute, who was not involved in the research. “The use of primary hepatocytes, endothelial cells, and stromal cells, leading to a 50-fold increase, is impressive and could pave the way for the growth of other organoids currently being employed by other labs.”

Intriguingly, the researchers also found that after implantation, the tissue began forming tiny precursors to bile ducts, which they had not designed. “The next step for us is to find out how they got there, whether we can make it happen faster and in a more organized way, and whether they’re functional,” Bhatia says.

The researchers are also exploring the best source of cells for these implants. Currently they are using liver cells from human organs that can’t be transplanted because they were on ice for too long after being removed from the donor or had some unusual anatomy. Other possibilities include using liver cells taken from the patient who will be receiving the tissue, which would avoid the need for immunosuppressive drugs, or using liver cells generated from induced pluripotent stem cells.

MIT researchers have engineered an expandable liver from human liver cells that can grow up to 50 times its original size, reports Lindsay Kalter for the Boston Herald. In the future, the researchers would like to make the expandable livers smarter, “by embedding sensors in them to tell us how they are doing,” explains Prof. Sangeeta Bhatia.