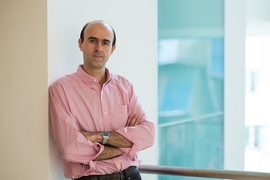 Caption:
Mehrdad Jazayeri, the Robert A. Swanson Career Development Professor of Life Sciences, a member of MIT’s McGovern Institute for Brain Research, and the senior author of the study.
Credits:
Image: Justin Knight

Humans can perform a vast array of mental operations and adjust their behavioral responses based on external instructions and internal beliefs. For example, to tap your feet to a musical beat, your brain has to process the incoming sound and also use your internal knowledge of how the song goes.

MIT neuroscientists have now identified a strategy that the brain uses to rapidly select and flexibly perform different mental operations. To make this discovery, they applied a mathematical framework known as dynamical systems analysis to understand the logic that governs the evolution of neural activity across large populations of neurons.

“The brain can combine internal and external cues to perform novel computations on the fly,” says Mehrdad Jazayeri, the Robert A. Swanson Career Development Professor of Life Sciences, a member of MIT’s McGovern Institute for Brain Research, and the senior author of the study. “What makes this remarkable is that we can make adjustments to our behavior at a much faster time scale than the brain’s hardware can change. As it turns out, the same hardware can assume many different states, and the brain uses instructions and beliefs to select between those states.”

Previous work from Jazayeri’s group has found that the brain can control when it will initiate a movement by altering the speed at which patterns of neural activity evolve over time. Here, they found that the brain controls this speed flexibly based on two factors: external sensory inputs and adjustment of internal states, which correspond to knowledge about the rules of the task being performed.

Evan Remington, a McGovern Institute postdoc, is the lead author of the paper, which appears in the June 6 edition of Neuron. Other authors are former postdoc Devika Narain and MIT graduate student Eghbal Hosseini.

Neuroscientists believe that “cognitive flexibility,” or the ability to rapidly adapt to new information, resides in the brain’s higher cortical areas, but little is known about how the brain achieves this kind of flexibility.

To understand the new findings, it is useful to think of how switches and dials can be used to change the output of an electrical circuit. For example, in an amplifier, a switch may select the sound source by controlling the input to the circuit, and a dial may adjust the volume by controlling internal parameters such as a variable resistance. The MIT team theorized that the brain similarly transforms instructions and beliefs to inputs and internal states that control the behavior of neural circuits.

To test this, the researchers recorded neural activity in the frontal cortex of animals trained to perform a flexible timing task called “ready, set, go.” In this task, the animal sees two visual flashes — “ready” and “set” — that are separated by an interval anywhere between 0.5 and 1 second, and initiates a movement — “go” — some time after “set.” The animal has to initiate the movement such that the “set-go” interval is either the same as or 1.5 times the “ready-set” interval. The instruction for whether to use a multiplier of 1 or 1.5 is provided in each trial.

Neural signals recorded during the “set-go” interval clearly carried information about both the multiplier and the measured length of the “ready-set” interval, but the nature of these representations seemed bewilderingly complex. To decode the logic behind these representations, the researchers used the dynamical systems analysis framework. This analysis is used in the study of a wide range of physical systems, from simple electrical circuits to space shuttles.

The application of this approach to neural data in the “ready, set, go” task enabled Jazayeri and his colleagues to discover how the brain adjusts the inputs to and initial conditions of frontal cortex to control movement times flexibly. A switch-like operation sets the input associated with the correct multiplier, and a dial-like operation adjusts the state of neurons based on the “ready-set” interval. These two complementary control strategies allow the same hardware to produce different behaviors.

David Sussillo, a research scientist at Google Brain and an adjunct professor at Stanford University, says a key to the study was the research team’s development of new mathematical tools to analyze huge amounts of data from neuron recordings, allowing the researchers to uncover how a large population of neurons can work together to perform mental operations related to timing and rhythm.

“They have very rigorously brought the dynamical systems approach to the problem of timing,” says Sussillo, who was not involved in the research.

“A bridge between behavior and neurobiology”

Many unanswered questions remain about how the brain achieves this flexibility, the researchers say. They are now trying to find out what part of the brain sends information about the multiplier to the frontal cortex, and they also hope to study what happens in these neurons as they first learn tasks that require them to respond flexibly.

“We haven’t connected all the dots from behavioral flexibility to neurobiological details. But what we have done is to establish an algorithmic understanding based on the mathematics of dynamical systems that serves as a bridge between behavior and neurobiology,” Jazayeri says.

The researchers also hope to explore whether this type of model could help to explain behavior of other parts of the brain that have to perform computations flexibly.

Study reveals how the brain tracks objects in motion