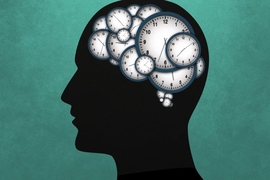 ↓ Download Image
Caption: A new study from MIT researchers provides evidence for an alternative timekeeping system that relies on the neurons responsible for producing a specific action. Depending on the time interval required, these neurons compress or stretch out the steps they take to generate the behavior at a specific time.
Credits: Image: Christine Daniloff/MIT

Caption:
A new study from MIT researchers provides evidence for an alternative timekeeping system that relies on the neurons responsible for producing a specific action. Depending on the time interval required, these neurons compress or stretch out the steps they take to generate the behavior at a specific time.

Timing is critical for playing a musical instrument, swinging a baseball bat, and many other activities. Neuroscientists have come up with several models of how the brain achieves its exquisite control over timing, the most prominent being that there is a centralized clock, or pacemaker, somewhere in the brain that keeps time for the entire brain.

However, a new study from MIT researchers provides evidence for an alternative timekeeping system that relies on the neurons responsible for producing a specific action. Depending on the time interval required, these neurons compress or stretch out the steps they take to generate the behavior at a specific time.

“What we found is that it’s a very active process. The brain is not passively waiting for a clock to reach a particular point,” says Mehrdad Jazayeri, the Robert A. Swanson Career Development Professor of Life Sciences, a member of MIT’s McGovern Institute for Brain Research, and the senior author of the study.

MIT postdoc Jing Wang and former postdoc Devika Narain are the lead authors of the paper, which appears in the Dec. 4 issue of Nature Neuroscience. Graduate student Eghbal Hosseini is also an author of the paper.

One of the earliest models of timing control, known as the clock accumulator model, suggested that the brain has an internal clock or pacemaker that keeps time for the rest of the brain. A later variation of this model suggested that instead of using a central pacemaker, the brain measures time by tracking the synchronization between different brain wave frequencies.

Although these clock models are intuitively appealing, Jazayeri says, “they don’t match well with what the brain does.”

No one has found evidence for a centralized clock, and Jazayeri and others wondered if parts of the brain that control behaviors that require precise timing might perform the timing function themselves. “People now question why would the brain want to spend the time and energy to generate a clock when it’s not always needed. For certain behaviors you need to do timing, so perhaps the parts of the brain that subserve these functions can also do timing,” he says.

To explore this possibility, the researchers recorded neuron activity from three brain regions in animals as they performed a task at two different time intervals — 850 milliseconds or 1,500 milliseconds.

The researchers found a complicated pattern of neural activity during these intervals. Some neurons fired faster, some fired slower, and some that had been oscillating began to oscillate faster or slower. However, the researchers’ key discovery was that no matter the neurons’ response, the rate at which they adjusted their activity depended on the time interval required.

At any point in time, a collection of neurons is in a particular “neural state,” which changes over time as each individual neuron alters its activity in a different way. To execute a particular behavior, the entire system must reach a defined end state. The researchers found that the neurons always traveled the same trajectory from their initial state to this end state, no matter the interval. The only thing that changed was the rate at which the neurons traveled this trajectory.

“What we found is that the brain doesn’t change the trajectory when the interval changes, it just changes the speed with which it goes from the initial internal state to the final state,” Jazayeri says.

Dean Buonomano, a professor of behavioral neuroscience at the University of California at Los Angeles, says that the study “provides beautiful evidence that timing is a distributed process in the brain — that is, there is no single master clock.”

“This work also supports the notion that the brain does not tell time using a clock-like mechanism, but rather relies on the dynamics inherent to neural circuits, and that as these dynamics increase and decrease in speed, animals move more quickly or slowly,” adds Buonomano, who was not involved in the research.

The researchers focused their study on a brain loop that connects three regions: the dorsomedial frontal cortex, the caudate, and the thalamus. They found this distinctive neural pattern in the dorsomedial frontal cortex, which is involved in many cognitive processes, and the caudate, which is involved in motor control, inhibition, and some types of learning. However, in the thalamus, which relays motor and sensory signals, they found a different pattern: Instead of altering the speed of their trajectory, many of the neurons simply increased or decreased their firing rate, depending on the interval required.

Jazayeri says this finding is consistent with the possibility that the thalamus is instructing the cortex on how to adjust its activity to generate a certain interval.

The researchers also created a computer model to help them further understand this phenomenon. They began with a model of hundreds of neurons connected together in random ways, and then trained it to perform the same interval-producing task they had used to train animals, offering no guidance on how the model should perform the task.

They found that these neural networks ended up using the same strategy that they observed in the animal brain data. A key discovery was that this strategy only works if some of the neurons have nonlinear activity — that is, the strength of their output doesn’t constantly increase as their input increases. Instead, as they receive more input, their output increases at a slower rate.

Jazayeri now hopes to explore further how the brain generates the neural patterns seen during varying time intervals, and also how our expectations influence our ability to produce different intervals.

MIT researchers have found that a network of neurons compress or stretch their activity in order to control the brain’s timing, reports Alyssa Meyers for The Boston Globe. “Instead of passively waiting for a clock to reach a certain point, the team found the system of neurons changes its state independently based on the action being performed.”

Newsweek reporter Joseph Frankel writes that MIT researchers have found that the brain relies on a network of neurons to keep track of time. The researchers found that, “neurons appear to fire in a similar pattern, whether operating at fast or slow speeds...But interestingly, the same patterns stretch or compress over time, depending on the rate of the task.”

A head of time