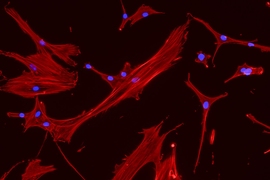 Patients with blood cancers such as leukemia and lymphoma are often treated by irradiating their bone marrow to destroy the diseased cells. After the treatment, patients are vulnerable to infection and fatigue until new blood cells grow back.

Using a technique known as mechanopriming, the researchers grew mesenchymal stem cells (MSCs) on a surface whose mechanical properties are very similar to that of bone marrow. This induced the cells to produce special factors that help hematopoietic stem and progenitor cells (HSPCs) differentiate into red and white blood cells, as well as platelets and other blood cells.

“You can think about it like you’re trying to grow a plant,” says Krystyn Van Vliet, the Michael and Sonja Koerner Professor of Materials Science and Engineering, a professor of biological engineering, and associate provost. “The MSCs are coming in and improving the soil so that the progenitor cells can start proliferating and differentiating into the blood cell lineages that you need to survive.”

In a study of mice, the researchers showed that the specially grown MSCs helped the animals to recover much more quickly from bone marrow irradiation.

MSCs are produced throughout the body and can differentiate into a variety of tissues, including bone, cartilage, muscle, and fat. They can also secrete proteins that help other types of stem cells differentiate into mature cells.

“They act like drug factories,” Van Vliet says. “They can become tissue lineage cells, but they also pump out a lot of factors that change the environment that the hematopoietic stem cells are operating in.”

When cancer patients receive a stem cell transplant, they usually receive only HPSCs, which can become blood cells. Van Vliet’s team has shown previously that when mice are also given MSCs, they recover faster. However, in a given population of MSCs, usually only about 20 percent produce the factors that are needed to stimulate blood cell growth and bone marrow recovery.

“Left to their own devices in the current state-of-the-art culture environments, MSCs become heterogeneous and they all express a variety of factors,” Van Vliet says.

In an earlier study, Van Vliet and her SMART colleagues showed that she could sort MSCs with a special microfluidic device that can identify the 20 percent that promote blood cell growth. However, she and her students wanted to improve on that by finding a way to stimulate an entire population of MSCs to produce the necessary factors.

To do that, they first had to discover which factors were the most important. They showed that while many factors contribute to blood cell differentiation, secretion of a protein called osteopontin was most highly correlated with better survival rates in mice treated with MSCs.

The researchers then explored the idea of “mechanopriming” the cells so that they would produce more of the necessary factors. Over the past decade, Van Vliet and other researchers have shown that varying the mechanical properties of surfaces on which stem cells are grown can affect their differentiation into mature cell types. However, in this study, for the first time, she showed that mechanical properties can also affect the factors that stem cells secrete before committing to a specific tissue cell lineage.

Usually, stem cells removed from the body are grown on a flat sheet of glass or stiff plastic. The MIT team decided to try growing the cells on a polymer called PDMS and to vary its mechanical properties to see how that would affect the cells. They designed materials that varied in both their stiffness and their viscosity, which is a measure of how quickly the material stretches when stress is applied.

The researchers found that MSCs grown on materials with mechanical properties most similar that of bone marrow produced the greatest number of the factors necessary to induce HPSPCs to differentiate into mature blood cells.

The researchers then tested their specially grown MSCs by implanting them into mice that had had their bone marrow irradiated. Even though they did not implant any HSPCs, this treatment quickly repopulated the animals’ blood cells and helped them to recover more quickly than mice treated with MSCs grown on traditional glass surfaces. They also recovered faster than mice treated with the factor-producing MSCs that were selected by the microfluidic sorting device.

“The mouse studies were models of radiation therapy commonly used to kill cancer cells in the clinic. However, these therapies are highly destructive and also destroy healthy cells as well,” Liu says. “Our mechanoprimed MSCs can help to better support and regenerate those healthy bone marrow cells faster in these mouse models, and we hope the same results would translate to humans.”

“Illustrating how mechanopriming of mesenchymal stem cells can be exploited to improve on hematopoietic recovery is of huge medical significance,” says Viola Vogel, chair of the Department of Health Science at Technology at ETH Zurich, who was not involved in the research. “It also sheds light onto how to utilize their approach to perhaps take advantage of other cell subpopulations for therapeutic applications in the future.”

Van Vliet’s lab is now performing more animal studies in hopes of developing a combination treatment of MSCs and HSPCs that could be tested in humans.

“You can’t survive with a low blood cell count for very long,” she says. “If you’re able to get your complete blood cell count up to normal levels faster, you have a much better prognosis for speed of recovery.”

The researchers also hope to study whether mechanopriming can induce MSCs to produce different factors that would stimulate the development of additional cell types that could be useful for treating other diseases.

“You could imagine that by changing their culture environment, including their mechanical environment, MSCs could be used for administration to target several other diseases,” such as Parkinson’s disease, rheumatoid arthritis, and others, Van Vliet says.

The research was funded by the BioSystems and Micromechanics Interdisciplinary Research Group of the Singapore-MIT Alliance for Research and Technology (SMART), through the Singapore National Research Foundation, and the National Institutes of Health.

Crowding causes cells to produce an orderly matrix of molecules