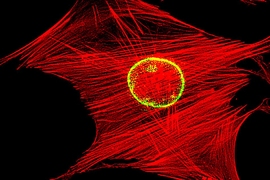 ↓ Download Image
Caption: MIT and SMART researchers have developed a way to isolate mesenchymal stem cells based on physical traits such as stiffness.
Credits: Image courtesy of the researchers

Caption:
MIT and SMART researchers have developed a way to isolate mesenchymal stem cells based on physical traits such as stiffness.
Credits:
Image courtesy of the researchers

Deep within the bone marrow resides a type of cells known as mesenchymal stem cells (MSCs). These immature cells can differentiate into cells that produce bone, cartilage, fat, or muscle — a trait that scientists have tried to exploit for tissue repair.

In a new study that should make it easier to develop such stem-cell-based therapies, a team of researchers from MIT and the Singapore-MIT Alliance in Research and Technology (SMART) has identified three physical characteristics of MSCs that can distinguish them from other immature cells found in the bone marrow. Based on this information, they plan to create devices that could rapidly isolate MSCs, making it easier to generate enough stem cells to treat patients.

Until now, there has been no good way to separate MSCs from bone marrow cells that have already begun to differentiate into other cell types, but share the same molecules on the cell surface. This may be one reason why research results vary among labs, and why stem-cell treatments now in clinical trials are not as effective as they could be, says Krystyn Van Vliet, an MIT associate professor of materials science and engineering and biological engineering and a senior author of the paper, which appears in the Proceedings of the National Academy of Sciences this week.

“Some of the cells that you’re putting in and calling stem cells are producing a beneficial therapeutic outcome, but many of the cells that you’re putting in are not,” Van Vliet says. “Our approach provides a way to purify or highly enrich for the stem cells in that population. You can now find the needles in the haystack and use them for human therapy.”

MSCs make up only a small percentage of cells in the bone marrow. Other immature cells found there include osteogenic cells, which have already begun the developmental path toward becoming cartilage- or bone-producing cells. Currently, researchers try to isolate MSCs based on protein markers found on the cell surfaces. However, these markers are not specific to MSCs and can also yield other types of immature cells that are more differentiated.

“Conventional cell-surface markers are frequently used to isolate different types of stem cells from the human bone marrow, but they lack sufficient ‘resolution’ to distinguish between subpopulations of mesenchymal stromal cells with distinct functions,” Lee says.

The researchers set out to find biophysical markers for multipotency — the ability to become many different cell types. They first suspected that cell size might be a factor, because fetal bone marrow stem cells, which tend to have a higher percentage of MSCs, are usually small in diameter.

After measuring several other physical traits, the researchers found two that could be combined with size to completely distinguish MSCs from other stem cells: stiffness of the cell, and the degree of fluctuation in the cell’s nuclear membrane.

These features appear to correspond to what is already known about stem cells, Van Vliet says. Compared with cells that have already committed to their final fate, immature cells have genetic material that moves around inside the nucleus, producing more fluctuations of the nuclear cell membrane. Stem cells also have a less rigid cytoskeletal structure than those of highly differentiated cells, at least when adhered to materials such as glass, making those attached cells seem less stiff.

The researchers then tested the regenerative abilities of the isolated MSCs in mice. They found that these cells could help repair both muscle and bone injuries, while cells identified as osteogenic stromal cells were able to repair bone but not muscle.

“We have provided the first demonstration that subpopulations of mesenchymal stromal cells can be identified and highly enriched for bone growth and muscle repair,” Lee says. “We envision that this approach would also be important in the selection and purification of bone marrow-derived stem cells for tissue repair in human patients suffering from a range of tissue-degenerative diseases.”

“This is potentially a big step forward in establishing a marker-free way of identifying mesenchymal stem cells with maximum differentiation capacity,” says Jochen Guck, a professor of cellular machines at the Dresden University of Technology. “Biophysical markers have long been discussed and sought as an alternative to antibody labeling. What sets this work apart from others is that it clearly says that no single marker (at least of those tried) alone is predictive enough, but that a combination of them is required.”

Van Vliet and Poon also hope to begin a clinical trial of the osteogenic cells isolated in this study, which could prove useful for treating bone injuries.

The research was funded by the National Research Foundation of Singapore through the SMART BioSystems and Micromechanics Interdisciplinary Research Group.

Crowding causes cells to produce an orderly matrix of molecules