Insulator or superconductor? Physicists find graphene is both 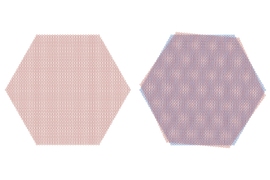 ↓ Download Image
Caption: Physicists at MIT and Harvard University have found that graphene, a lacy, honeycomb-like sheet of carbon atoms, can behave at two electrical extremes: as an insulator, in which electrons are completely blocked from flowing; and as a superconductor, in which electrical current can stream through without resistance.
Credits: Courtesy of the researchers

Caption:
Physicists at MIT and Harvard University have found that graphene, a lacy, honeycomb-like sheet of carbon atoms, can behave at two electrical extremes: as an insulator, in which electrons are completely blocked from flowing; and as a superconductor, in which electrical current can stream through without resistance.
Credits:
Courtesy of the researchers

It’s hard to believe that a single material can be described by as many superlatives as graphene can. Since its discovery in 2004, scientists have found that the lacy, honeycomb-like sheet of carbon atoms — essentially the most microscopic shaving of pencil lead you can imagine — is not just the thinnest material known in the world, but also incredibly light and flexible, hundreds of times stronger than steel, and more electrically conductive than copper.

Now physicists at MIT and Harvard University have found the wonder material can exhibit even more curious electronic properties. In two papers published today in Nature, the team reports it can tune graphene to behave at two electrical extremes: as an insulator, in which electrons are completely blocked from flowing; and as a superconductor, in which electrical current can stream through without resistance.

The physicists accomplished this by creating a “superlattice” of two graphene sheets stacked together — not precisely on top of each other, but rotated ever so slightly, at a “magic angle” of 1.1 degrees. As a result, the overlaying, hexagonal honeycomb pattern is offset slightly, creating a precise moiré configuration that is predicted to induce strange, “strongly correlated interactions” between the electrons in the graphene sheets. In any other stacked configuration, graphene prefers to remain distinct, interacting very little, electronically or otherwise, with its neighboring layers.

The team, led by Pablo Jarillo-Herrero, an associate professor of physics at MIT, found that when rotated at the magic angle, the two sheets of graphene exhibit nonconducting behavior, similar to an exotic class of materials known as Mott insulators. When the researchers then applied voltage, adding small amounts of electrons to the graphene superlattice, they found that, at a certain level, the electrons broke out of the initial insulating state and flowed without resistance, as if through a superconductor.

“We can now use graphene as a new platform for investigating unconventional superconductivity,” Jarillo-Herrero says. “One can also imagine making a superconducting transistor out of graphene, which you can switch on and off, from superconducting to insulating. That opens many possibilities for quantum devices.”

A material’s ability to conduct electricity is normally represented in terms of energy bands. A single band represents a range of energies that a material’s electrons can have. There is an energy gap between bands, and when one band is filled, an electron must embody extra energy to overcome this gap, in order to occupy the next empty band.

A material is considered an insulator if the last occupied energy band is completely filled with electrons. Electrical conductors such as metals, on the other hand, exhibit partially filled energy bands, with empty energy states which the electrons can fill to freely move.

Mott insulators, however, are a class of materials that appear from their band structure to conduct electricity, but when measured, they behave as insulators. Specifically, their energy bands are half-filled, but because of strong electrostatic interactions between electrons (such as charges of equal sign repelling each other), the material does not conduct electricity. The half-filled band essentially splits into two miniature, almost-flat bands, with electrons completely occupying one band and leaving the other empty, and hence behaving as an insulator.

“This means all the electrons are blocked, so it’s an insulator because of this strong repulsion between the electrons, so nothing can flow,” Jarillo-Herrero explains. “Why are Mott insulators important? It turns out the parent compound of most high-temperature superconductors is a Mott insulator.”

In other words, scientists have found ways to manipulate the electronic properties of Mott insulators to turn them into superconductors, at relatively high temperatures of about 100 kelvins. To do this, they chemically “dope” the material with oxygen, the atoms of which attract electrons out of the Mott insulator, leaving more room for remaining electrons to flow. When enough oxygen is added, the insulator morphs into a superconductor. How exactly this transition occurs, Jarillo-Herrero says, has been a 30-year mystery.

“This is a problem that is 30 years and counting, unsolved,” Jarillo-Herrero says. “These high-temperature superconductors have been studied to death, and they have many interesting behaviors. But we don’t know how to explain them.”

Jarillo-Herrero and his colleagues looked for a simpler platform to study such unconventional physics. In studying the electronic properties in graphene, the team began to play around with simple stacks of graphene sheets. The researchers created two-sheet superlattices by first exfoliating a single flake of graphene from graphite, then carefully picking up half the flake with a glass slide coated with a sticky polymer and an insulating material of boron nitride.

They then rotated the glass slide very slightly and picked up the second half of the graphene flake, adhering it to the first half. In this way, they created a superlattice with an offset pattern that is distinct from graphene’s original honeycomb lattice.

The team repeated this experiment, creating several “devices,” or graphene superlattices, with various angles of rotation, between 0 and 3 degrees. They attached electrodes to each device and measured an electrical current passing through, then plotted the device’s resistance, given the amount of the original current that passed through.

“If you are off in your rotation angle by 0.2 degrees, all the physics is gone,” Jarillo-Herrero says. “No superconductivity or Mott insulator appears. So you have to be very precise with the alignment angle.”

At 1.1 degrees — a rotation that has been predicted to be a “magic angle” — the researchers found the graphene superlattice electronically resembled a flat band structure, similar to a Mott insulator, in which all electrons carry the same energy regardless of their momentum.

For electrons, this means that, even if they are occupying a half-filled energy band, one electron does not have any more energy than any other electron, to enable it to move around in that band. Therefore, even though such a half-filled band structure should act like a conductor, it instead behaves as an insulator — and more precisely, a Mott insulator.

This gave the team an idea: What if they could add electrons to these Mott-like superlattices, similar to how scientists doped Mott insulators with oxygen to turn them into superconductors? Would graphene assume superconducting qualities in turn?

To find out, they applied a small gate voltage to the “magic-angle graphene superlattice,” adding small amounts of electrons to the structure. As a result, individual electrons bound together with other electrons in graphene, allowing them to flow where before they could not. Throughout, the researchers continued to measure the electrical resistance of the material, and found that when they added a certain, small amount of electrons, the electrical current flowed without dissipating energy — just like a superconductor.

“You can flow current for free, no energy wasted, and this is showing graphene can be a superconductor,” Jarillo-Herrero says.

Perhaps more importantly, he says the researchers are able to tune graphene to behave as an insulator or a superconductor, and any phase in between, exhibiting all these diverse properties in one single device. This is in contrast to other methods, in which scientists have had to grow and manipulate hundreds of individual crystals, each of which can be made to behave in just one electronic phase.

“Usually, you have to grow different classes of materials to explore each phase,” Jarillo-Herrero says. “We’re doing this in-situ, in one shot, in a purely carbon device. We can explore all those physics in one device electrically, rather than having to make hundreds of devices. It couldn’t get any simpler.”

This research was supported in part by the Gordon and Betty Moore Foundation and ther National Science Foundation.

Writing for Quanta Magazine, David Freedman spotlights Prof. Pablo Jarillo-Herrero’s discovery that when twisted to a “magic” angle, graphene can act as a semiconductor. Freedman writes that the “discovery has given scientists a relatively simple platform for exploring exotic quantum effects.”

Prof. Pablo Jarillo-Herrero speaks with Gizmodo reporter Ryan Mandelbaum about his work showing that when twisted to the right angle, graphene can serve as an insulator or semiconductor. “This sort of field of ‘twistronics’ is something with great potential in terms of scientific discovery and intellectual interest,” Jarillo-Herrero explains.

Nature reporter Elizabeth Gibney spotlights Prof. Pablo Jarillo-Herrero’s discovery that graphene can act as a superconductor when twisted to a magic angle. “I haven’t seen this much excitement in the graphene field since its initial discovery,” said ChunNing Jeanie Lau, a professor at Ohio State University, of the impact of Jarillo-Herrero’s findings.

Prof. Pablo Jarillo-Herrero’s discovery that when graphene is rotated to a “magic angle” it can act as a high-temperature superconductor has been named the Physics World 2018 Breakthrough of the Year. Physics World reporter Hamish Johnston writes that the “discovery led to the development of ‘twistronics’, which is a new and very promising technique for adjusting the electronic properties of graphene.”

For his blog “In the Pipeline”, Science writer Derek Lowe discusses the potentials of graphene as a superconductor, highlighting research led by associate Prof. Pablo Jarillo-Herrero. He goes on to mention the same technology as enabling MIT’s “tokamak-design fusion reactor that is far more compact than any previous attempts.”

MIT researchers have discovered that arranging two stacked layers of graphene at a slight angle makes the material a superconductor, writes Elizabeth Gibney for Nature. After discovering that the graphene had the ability to conduct electrons, researchers applied “a small electric field to feed just a few extra charge carriers into the system, and it became a superconductor.”