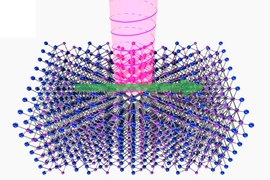 Caption:
Researchers have observed a novel phenomenon in sheets of tantalum arsenide that mimics the behavior of theorized (but never observed) particles called Weyl fermions.

Mid-infrared wavelengths of light are invisible to the eye but can be useful for a number of technologies, including night vision, thermal sensing, and environmental monitoring. Now, a new phenomenon in an unconventional metal, found by physicists at MIT and elsewhere, could provide a new way of making highly sensitive detectors for these elusive wavelengths. The phenomenon is closely related to a particle that has been predicted by high-energy physicists but never observed.

Physicists group all the fundamental particles in nature into two categories, fermions and bosons, according to a property called spin. The fermions, in turn, have three types: Dirac, Majorana, and Weyl. Dirac fermions include the electrons in regular metals such as copper or gold. The other two are unconventional particles that can give rise to strange and fundamentally new physics, which potentially can be used to build more efficient circuits and other devices.

The Weyl fermion was first theorized almost a century ago by German physicist Hermann Weyl. Even though its existence is posited as part of the equations that form the widely accepted Standard Model of subatomic physics, Weyl fermions have never actually been observed experimentally. The theory predicts that they should move at the speed of light, and, at the same time, spin about the direction of motion. They come in two varieties depending on whether their rotation around the direction of motion is clockwise or counterclockwise. This property is known as the handedness, or chirality, of Weyl fermions.

Even though Weyl fermions have never been observed directly, researchers have recently observed a phenomenon that mimics essential aspects of their theorized properties, in a class of unconventional metals known as Weyl semimetals. One remaining challenge was to experimentally measure the chirality of these Weyl fermions, which evaded detection from most standard experimental techniques.

In a paper published in the journal Nature Physics, an MIT team was able to measure Weyl fermion chirality by using circularly polarized light. This work was done by MIT postdocs Qiong Ma and Su-Yang Xu; physics professors Nuh Gedik, Pablo Jarillo-Herrero, and Patrick Lee; and eight other researchers at MIT and other universities in the U.S., China, and Singapore.

Specifically, the researchers found that a metal called tantalum arsenide, or TaAs, “exhibits an interesting optoelectronic property called the circular photogalvanic effect,” says Gedik, an associate professor in the Department of Physics. Conventionally, electrical conduction requires applying an external voltage across the two ends of a metal (such as copper). By contrast, the researchers found in this work that, by shining circularly polarized light in the mid-infrared wavelength range, the TaAs can produce an electrical current without applying external voltages. Moreover, the direction of the current is dictated by the chirality of Weyl fermions and can be switched by changing the light polarization from left-handed to right-handed.

The amount of current generated in this way turns out to be surprisingly large — 10 to 100 times stronger than the response of other materials used for detecting this kind of light. This could make the material useful for extremely sensitive light detectors in this mid-infrared part of the spectrum.

“Despite being predicted a long time ago, Weyl fermions have never been observed as a fundamental particle in particle physics,” Gedik explains. But the new experiments, he says, have shown that in these unconventional metals, ordinary electrons “can behave in a strange way so that their motion mimics the behavior of Weyl fermions,” and can exhibit a range of novel properties.

Over the years since Weyl’s original hypothesis, “Lots of people suspected that neutrinos were Weyl fermions,” Xu says. Neutrinos are subatomic particles that hurtle through the universe at nearly the speed of light and were long thought to have no mass at all, just like the posited Weyl fermions. But then, when it was discovered that neurinos did in fact have a tiny but measurable mass, that possibility was ruled out, and actual Weyl fermions have still never been observed. “But the way the behavior of electrons in semimetals such as TaAs closely mimics what was predicted for Weyl fermions lends support to Weyl’s original theory,” Ma says.

Electrons “can behave like Weyl fermions in those metals,” Ma says. “They always come in pairs that always have opposite chirality.”

While others had observed some of the unusual behavior of electrons in these materials, nobody had previously been able to probe the key aspect of the Weyl fermions, namely their left- or right-handed spin. But in this research, “we figured out a way to measure the chirality,” Xu says, by using circularly polarized light to trigger the electrical current, and showing that opposite light polarizations caused the current to move in opposite directions. By measuring the current using electrodes attached to the material for different light polarizations, they were able to deduce the chirality of Weyl fermions responsible for this current.

“The significance of this work is that this is the first-ever direct observation of the chirality of Weyl fermions,” says Anton Burkov, associate professor of physics and astronomy at the University of Waterloo, in Canada, who was not involved in this work. “The chiral charge of Weyl fermions does have other direct consequences, like the Fermi arc edge states, but one would like to measure this property directly in electromagnetic response. This work reports the first such measurement.”

Toward “valleytronic” devices for data storage or computer logic systems