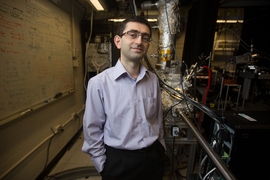 ↓ Download Image
Caption: Using high-speed pulsed lasers, Nuh Gedik (pictured) has managed to observe a hybrid state between electrons and photons. These states had been theoretically proposed but never before experimentally observed in solids.

Caption:
Using high-speed pulsed lasers, Nuh Gedik (pictured) has managed to observe a hybrid state between electrons and photons. These states had been theoretically proposed but never before experimentally observed in solids.
Credits:
Photo: Bryce Vickmark

Physicist Nuh Gedik specializes in peering into the high-speed activities of subatomic particles that inhabit exotic materials and physical states. Governed by quantum-mechanical rules, these particles were long thought to be beyond the reach of direct observation.

Growing up in Turkey, Gedik knew early on that he was interested in math and science, beginning with elementary school, where his father was his teacher for the first three years. His interests in physics grew in high school, where he had an inspiring physics teacher and ended up representing Turkey in an international Physics Olympiad.

At first he wasn’t quite sure what area of physics he wanted to study. After finishing his undergraduate work at Bogazici University in Istanbul, he decided to pursue his doctorate in the United States. He first went to the University of Southern California, but he sought a bigger department and moved to the University of California at Berkeley.

Gedik wanted to do theoretical physics, but an experimental physicist at Berkeley persuaded him to try his hand at lab work. “I didn’t like it very much” at first, he says, because he wasn’t yet comfortable with the equipment he was using, and an initial experiment on optical effects that he expected to take a few hours ended up taking a week. But when it finally succeeded — the expected beam of blue light finally came shining through — “that was a turning point for me,” he says. Realizing that he could achieve successful results in the lab, he turned fully to experimental work and earned a PhD based on using ultrafast lasers to study the behavior of high-temperature superconductors.

After earning his doctorate from Berkeley in 2004, he moved to Caltech for four years as a postdoc, working under the Nobel laureate in chemistry Ahmed Zewail, who had been developing applications of a novel technique known as ultrafast electron diffraction. “I went there to learn the technique and broaden my perspective to other systems beyond superconductors,” Gedik says. At Caltech, he used this technique to investigate, among other things, the behavior of interfacial water near hydrophobic and hydrophilic (water-repelling and water-attracting) surfaces. He also succeeded in applying this technique to high-temperature superconductors for the first time.

Upon accepting an appointment as an assistant professor in the physics department at MIT in 2008, Gedik moved east with his wife Reyhan, who is now doing her medical residency at Boston Medical Center. They have a son, Bahadir, who is five.

Last year, Gedik earned tenure in that department, where he is now the Lawrence C. (1944) and Sarah W. Biedenharn Career Development Associate Professor of Physics.

The laser probe techniques have remained a basic part of his toolkit, enabling Gedik to study subatomic particles in quantum materials, where the bizarre rules of quantum mechanics dominate their behavior. But he has had to develop his own methods to extend their capabilities.

Through his use of high-speed pulsed lasers, which reveal phenomena that take place on a scale of femtoseconds (billionths of a second), Gedik has made important discoveries in the rapidly growing field of topological insulators — materials that completely block the flow of electric current within their bulk but conduct it freely on their surfaces. He and his co-workers were able to use these techniques to investigate the exotic surface electrons in these materials.

Gedik’s group used these methods to understand how these surface electrons interact with electrons from the bulk. “It wasn’t enough to get one picture” of what was going on in these materials, he said. “We wanted to get a movie, to understand the dynamics.” They figured out a way to simultaneously capture energy and momentum data on these electrons with femtosecond time resolution, making it possible to build up a full three-dimensional movie of these electronic states.

The next big step was the realization that light beams could be used to not only study these processes but also make changes to them. “We figured we could do even more, not just using light to probe these systems, but to control properties of these systems as well.” In particular, he managed to observe a hybrid state between electrons and photons. These states had been theoretically proposed but never before experimentally observed in solids.

Gedik hopes to keep pushing the boundaries further. One of the goals is to use these hybrid states to modify properties of the materials, such as turning a conductive material into insulating one, or turning an opaque material transparent. The ultimate dream is to use this approach to engineer materials with completely novel characteristics that do not exist under equilibrium conditions. The properties of these materials could then easily be modified by changing the light excitation. This could open up whole new areas for materials useful for electronics. “We haven’t done that yet,” he says, but the technique offers the possibility “that we could use them to create new states of matter.”