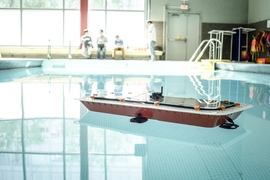 ↓ Download Image
Caption: Researchers from MIT’s Computer Science and Artificial Intelligence Laboratory (CSAIL) and the Senseable City Lab have designed a fleet of autonomous boats that offer high maneuverability and precise control. The boats can also be rapidly 3-D printed using a low-cost printer, making mass manufacturing more feasible. The boats could be used to taxi people around and to deliver goods, easing street traffic, or even perform city services overnight, instead of during busy daylight hours.
Credits: Courtesy of the researchers 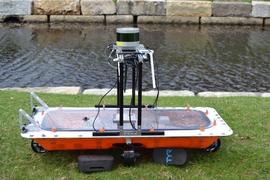 ↓ Download Image
Caption: The boats — rectangular 4-by-2-meter hulls equipped with sensors, microcontrollers, GPS modules, and other hardware — could also be programmed to self-assemble into floating bridges, concert stages, platforms for food markets, and other structures in a matter of hours.
Credits: Courtesy of the researchers

Caption:
Researchers from MIT’s Computer Science and Artificial Intelligence Laboratory (CSAIL) and the Senseable City Lab have designed a fleet of autonomous boats that offer high maneuverability and precise control.
Credits:
Courtesy of the researchers

Caption:
The boats — rectangular 4-by-2-meter hulls equipped with sensors, microcontrollers, GPS modules, and other hardware — could also be programmed to self-assemble into floating bridges, concert stages, platforms for food markets, and other structures in a matter of hours.
Credits:
Courtesy of the researchers

The future of transportation in waterway-rich cities such as Amsterdam, Bangkok, and Venice — where canals run alongside and under bustling streets and bridges — may include autonomous boats that ferry goods and people, helping clear up road congestion.

Researchers from MIT’s Computer Science and Artificial Intelligence Laboratory (CSAIL) and the Senseable City Lab in the Department of Urban Studies and Planning (DUSP), have taken a step toward that future by designing a fleet of autonomous boats that offer high maneuverability and precise control. The boats can also be rapidly 3-D printed using a low-cost printer, making mass manufacturing more feasible.

The boats could be used to taxi people around and to deliver goods, easing street traffic. In the future, the researchers also envision the driverless boats being adapted to perform city services overnight, instead of during busy daylight hours, further reducing congestion on both roads and canals.

“Imagine shifting some of infrastructure services that usually take place during the day on the road — deliveries, garbage management, waste management — to the middle of the night, on the water, using a fleet of autonomous boats,” says CSAIL Director Daniela Rus, co-author on a paper describing the technology that’s being presented at this week’s IEEE International Conference on Robotics and Automation.

Moreover, the boats — rectangular 4-by-2-meter hulls equipped with sensors, microcontrollers, GPS modules, and other hardware — could be programmed to self-assemble into floating bridges, concert stages, platforms for food markets, and other structures in a matter of hours. “Again, some of the activities that are usually taking place on land, and that cause disturbance in how the city moves, can be done on a temporary basis on the water,” says Rus, who is the Andrew and Erna Viterbi Professor of Electrical Engineering and Computer Science.

The boats could also be equipped with environmental sensors to monitor a city’s waters and gain insight into urban and human health.

The work was conducted as part of the “Roboat” project, a collaboration between the MIT Senseable City Lab and the Amsterdam Institute for Advanced Metropolitan Solutions (AMS). In 2016, as part of the project, the researchers tested a prototype that cruised around the city’s canals, moving forward, backward, and laterally along a preprogrammed path.

To make the boats, the researchers 3-D-printed a rectangular hull with a commercial printer, producing 16 separate sections that were spliced together. Printing took around 60 hours. The completed hull was then sealed by adhering several layers of fiberglass.

Integrated onto the hull are a power supply, Wi-Fi antenna, GPS, and a minicomputer and microcontroller. For precise positioning, the researchers incorporated an indoor ultrasound beacon system and outdoor real-time kinematic GPS modules, which allow for centimeter-level localization, as well as an inertial measurement unit (IMU) module that monitors the boat’s yaw and angular velocity, among other metrics.

The boat is a rectangular shape, instead of the traditional kayak or catamaran shapes, to allow the vessel to move sideways and to attach itself to other boats when assembling other structures. Another simple yet effective design element was thruster placement. Four thrusters are positioned in the center of each side, instead of at the four corners, generating forward and backward forces. This makes the boat more agile and efficient, the researchers say.

The team also developed a method that enables the boat to track its position and orientation more quickly and accurately. To do so, they developed an efficient version of a nonlinear model predictive control (NMPC) algorithm, generally used to control and navigate robots within various constraints.

The NMPC and similar algorithms have been used to control autonomous boats before. But typically those algorithms are tested only in simulation or don’t account for the dynamics of the boat. The researchers instead incorporated in the algorithm simplified nonlinear mathematical models that account for a few known parameters, such as drag of the boat, centrifugal and Coriolis forces, and added mass due to accelerating or decelerating in water. The researchers also used an identification algorithm that then identifies any unknown parameters as the boat is trained on a path.

Finally, the researchers used an efficient predictive-control platform to run their algorithm, which can rapidly determine upcoming actions and increases the algorithm’s speed by two orders of magnitude over similar systems. While other algorithms execute in about 100 milliseconds, the researchers’ algorithm takes less than 1 millisecond.

To demonstrate the control algorithm’s efficacy, the researchers deployed a smaller prototype of the boat along preplanned paths in a swimming pool and in the Charles River. Over the course of 10 test runs, the researchers observed average tracking errors — in positioning and orientation — smaller than tracking errors of traditional control algorithms.

That accuracy is thanks, in part, to the boat’s onboard GPS and IMU modules, which determine position and direction, respectively, down to the centimeter. The NMPC algorithm crunches the data from those modules and weighs various metrics to steer the boat true. The algorithm is implemented in a controller computer and regulates each thruster individually, updating every 0.2 seconds.

“The controller considers the boat dynamics, current state of the boat, thrust constraints, and reference position for the coming several seconds, to optimize how the boat drives on the path,” Wang says. “We can then find optimal force for the thrusters that can take the boat back to the path and minimize errors.”

The innovations in design and fabrication, as well as faster and more precise control algorithms, point toward feasible driverless boats used for transportation, docking, and self-assembling into platforms, the researchers say.

“Having swarms of robots in the canals of Amsterdam is a great idea,” says Javier Alonso-Mora, an assistant professor in the Cognitive Robotics Department at Delft University of Technology in the Netherlands, who was not involved in the research. “Twenty percent of the surface in the Netherlands is water, and robots can be an efficient mode of transportation and logistics. This is a first step in that direction, with a very nice prototype that is able to move in all directions and connect with other boats to build temporal structures. Together with the team at MIT we are now looking at the next steps in autonomy, including multirobot coordination and urban navigation.”

A next step for the work is developing adaptive controllers to account for changes in mass and drag of the boat when transporting people and goods. The researchers are also refining the controller to account for wave disturbances and stronger currents.

“We actually found that the Charles River has much more current than in the canals in Amsterdam,” Wang says. “But there will be a lot of boats moving around, and big boats will bring big currents, so we still have to consider this.”

The work was supported by a grant from AMS.

This Quartz video highlights how MIT researchers are developing a self-driving boat system that can navigate waterways and can transform into different structures to move cargo, trash or build a temporary bridge. “The boats find the best path between preprogrammed locations, while using GPS, laser sensors, and cameras to avoid hitting anything,” explains Michael Tabb.

NBC Mach reporter Tom Metcalfe writes that MIT researchers are developing autonomous boats that could be used to ferry goods and people and could help ease traffic congestion. “We believe that with fleets of very agile autonomous boats we can offload some street traffic onto the waterways,” explains Prof. Daniela Rus.

Researchers from MIT's CSAIL and Senseable City Lab “have designed a fleet of 3-D printed autonomous boats [that] could eventually taxi people and deliver goods,” reports CNBC’s Erin Black. The boats “can also be equipped to monitor a city's water quality,” Black explains.

Wired reporter Jack Stewart highlights how MIT researchers have developed a 3-D printed autonomous boat that could be used to ferry goods or people. The boats could eventually, “use their onboard GPS sensors and inertial measurement units to precisely position themselves in packs, forming instant floating bridges, or stages, or platforms for pop-up food markets on the water.”

In this Bloomberg radio segment, Prof. Daniela Rus discusses her work developing a fleet of autonomous 3-D printed boats that could not only transport goods and people, but also self-assemble into bridges and other structures. Rus explains that she is, “very excited about the idea of taking the autonomy technologies we have in driverless cars and applying them to other vehicles.”

An autonomous fleet for Amsterdam