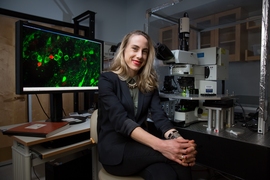 ↓ Download Image
Caption: Polina Anikeeva was born in Leningrad, USSR, but grew up in St. Petersburg, Russia – the same city, whose name reverted to its original form after the fall of the Soviet Union. While in school there, she encountered two inspiring scientists who helped propel her toward a career at MIT, where she now develops cutting-edge materials to help researchers probe the mysteries of the brain in unprecedented ways.

Caption:
Polina Anikeeva was born in Leningrad, USSR, but grew up in St. Petersburg, Russia – the same city, whose name reverted to its original form after the fall of the Soviet Union. While in school there, she encountered two inspiring scientists who helped propel her toward a career at MIT, where she now develops cutting-edge materials to help researchers probe the mysteries of the brain in unprecedented ways.

Polina Anikeeva was born in Leningrad, USSR, but grew up in St. Petersburg, Russia; the city’s name reverted to its original form after the fall of the Soviet Union. While in school there, she encountered two inspiring scientists who helped propel her toward a career at MIT, where she now develops cutting-edge materials to help researchers probe the mysteries of the brain.

Anikeeva’s parents are both engineers, and she became interested very early on in figuring out how to make things that hadn’t been made before. She has pursued that passion through all her work — as the Class of 1942 Associate Professor in Materials Science and Engineering and in her other activities. She has been an active climber and runner (she ran her third Boston Marathon last year), and as an avid artist she occasionally creates paintings to illustrate her scientific research or help her students visualize scientific concepts.

One of her earliest influences, she says, was Mikhail Georgievich Ivanov, the founder of a small math and science magnet school she attended in St. Petersburg, and her physics teacher there. “He was just a brilliant physics teacher and educated a lot of scientists who are now scattered across the world. He was a scientist himself and had worked in a research lab. But then he realized that his real passion and talent was educating kids,” she recalls.

She met her next significant mentor during her years as an undergraduate at the St. Petersburg State Polytechnic University, when she worked with Tatiana Birshtein, a professor of polymer physics at the Institute of Macromolecular Compounds of the Russian Academy of Sciences. “She was generous and adventurous enough to essentially get me a UROP position in her lab. And I had no idea how prominent she was, but as time went on it became clear that she’s actually one of the pioneers of polymer physics and went to win the L’Oréal-UNESCO Award for Women in Science the same year as Millie Dresselhaus. ... So I got really lucky to work with someone of that stature very early on.”

From there, Anikeeva spent her senior year at the Swiss Federal Institute of Technology in Zurich and then went on to an internship at Los Alamos National Laboratory in New Mexico, where her work took a turn, introducing her to spectroscopy, nanomaterials, and quantum dot solar cells. As she was trying to decide between graduate programs in physics or chemistry, she met an intern from MIT’s Department of Materials Science and Engineering, and decided to try that as a way of combining those fields. She completed her doctorate at MIT in materials science and engineering, and last year earned tenure as an associate professor in that department.

“It was very clear that I should go to MIT,” she says, “not because the faculty were really smart — faculty are pretty smart everywhere. It was because the students were really inspiring. They were really committed to their research but also had a really broad understanding of what is going on around them, from a research perspective and also from how it builds into the real world. … I wanted to be surrounded by really remarkable people.”

One of those people she met at MIT was to become her partner: a fellow faculty member, Warren Hoburg, who was in the aeronautics and astronautics department. While their relationship was very convenient with both of them working at MIT, she says, it suddenly became more complicated last year, when he was selected as part of NASA’s 2017 class of new astronauts. Now, “we’ll have to commute between Houston and Boston,” she says.

Soon after earning her PhD working with light-emitting quantum dots, Anikeeva determined that she was not interested in research aimed at making incremental improvements. “What I really wanted to do was not just improve devices that exist. I wanted to build devices that didn’t exist,” she says. She decided that biology was an area where a materials scientist could make significant contributions in developing new devices that could have a direct benefit for humanity.

Her first foray into moving from physics into biology produced an immediate surprise.  The first time she felt a mouse brain, she was startled by its pudding-like consistency that was so different from the stiff, brittle materials she was used to handling in her work in optoelectronics. That immediately began a quest that has been a major theme of her research ever since: developing materials that can be used as probes to deliver stimuli deep into the brain and that are flexible enough to match the movements of the surrounding brain tissue without causing damage.

Already, she and her students have developed multipurpose fibers that can deliver electrical, optical, and chemical signals to individual neurons in the brain, while matching the stretchiness and flexibility of brain tissue. They have also developed similar flexible implantable fibers that can be implanted into the spinal cord. These devices can be used for basic research to analyze spinal neural pathways and responses in animals that are awake and active, whereas existing methods with stiff implants require the animals to be anesthetized and immobilized.

Since then, she has extended her research to include ways of stimulating localized brain areas without any invasive contact at all, using magnetic fields to activate nanoparticles injected into specific locations. The system could be used for brain research and potentially for disease treatment, Anikeeva says.

The work is constantly exciting, she says. “There’s really nothing like it, to see a neural interface experiment work, because it’s not like waiting for a gene to be expressed or for a tissue to change in some way. You know when neurons fire — you see it right away. And this is really very addictive. I think all my students, even though they’re all engineers working on materials or devices, they all essentially can’t wait to introduce their tools into the animal model or into the tissue model to see those neurons flash.”

Anikeeva sees a fertile future in this field in which she has already done groundbreaking work. “The nervous system is just really a huge [scientific] problem, and being able to develop tools to understand it and study it I think will be a task sufficient for a lifetime. That’s especially true if we start looking at not just the brain but also interactions between the brain and the peripheral nervous system, because it turns out we are wired to the max. Every single one of our organs is wired, and we have no idea of what that wiring is doing.”

“So I think taken all together,” she says, “there are many, many lifetimes of work in this field where a materials scientist can contribute.”

Prof. Polina Anikeeva speaks with Forbes contributor Poornima Peiris about her work developing materials that could be used to help explore and better understand the brain and nervous system. “I am not interested in just improving things, I want to work on innovative ideas,” says Anikeeva.