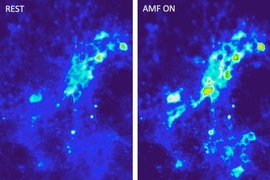 ↓ Download Image
Caption: Images show calcium ion influx into neurons as a result of magnetothermal excitation with alternating magnetic fields in the presence of magnetic nanoparticles.
Credits: Courtesy of the researchers

Caption:
Images show calcium ion influx into neurons as a result of magnetothermal excitation with alternating magnetic fields in the presence of magnetic nanoparticles.
Credits:
Courtesy of the researchers

Researchers at MIT have developed a method to stimulate brain tissue using external magnetic fields and injected magnetic nanoparticles — a technique allowing direct stimulation of neurons, which could be an effective treatment for a variety of neurological diseases, without the need for implants or external connections.

The research, conducted by Polina Anikeeva, an assistant professor of materials science and engineering, graduate student Ritchie Chen, and three others, has been published in the journal Science.

Previous efforts to stimulate the brain using pulses of electricity have proven effective in reducing or eliminating tremors associated with Parkinson’s disease, but the treatment has remained a last resort because it requires highly invasive implanted wires that connect to a power source outside the brain.

“In the future, our technique may provide an implant-free means to provide brain stimulation and mapping,” Anikeeva says.

In their study, the team injected magnetic iron oxide particles just 22 nanometers in diameter into the brain. When exposed to an external alternating magnetic field — which can penetrate deep inside biological tissues — these particles rapidly heat up.

The resulting local temperature increase can then lead to neural activation by triggering heat-sensitive capsaicin receptors — the same proteins that the body uses to detect both actual heat and the “heat” of spicy foods. (Capsaicin is the chemical that gives hot peppers their searing taste.) Anikeeva’s team used viral gene delivery to induce the sensitivity to heat in selected neurons in the brain.

This video shows a calcium ion influx into neurons as a result of magnetothermal excitation with alternating magnetic fields in the presence of magnetic nanoparticles. Neurons on the right have been heat-sensitized with the capsaicin receptor TRPV1; neurons on the left have not.

The particles, which have virtually no interaction with biological tissues except when heated, tend to remain where they’re placed, allowing for long-term treatment without the need for further invasive procedures.

“The nanoparticles integrate into the tissue and remain largely intact,” Anikeeva says. “Then, that region can be stimulated at will by externally applying an alternating magnetic field. The goal for us was to figure out whether we could deliver stimuli to the nervous system in a wireless and noninvasive way.”

The new work has proven that the approach is feasible, but much work remains to turn this proof-of-concept into a practical method for brain research or clinical treatment.

The use of magnetic fields and injected particles has been an active area of cancer research; the thought is that this approach could destroy cancer cells by heating them. “The new technique is derived, in part, from that research,” Anikeeva says. “By calibrating the delivered thermal dosage, we can excite neurons without killing them. The magnetic nanoparticles also have been used for decades as contrast agents in MRI scans, so they are considered relatively safe in the human body.”

The team developed ways to make the particles with precisely controlled sizes and shapes, in order to maximize their interaction with the applied alternating magnetic field. They also developed devices to deliver the applied magnetic field: Existing devices for cancer treatment — intended to produce much more intense heating — were far too big and energy-inefficient for this application.

The next step toward making this a practical technology for clinical use in humans “is to understand better how our method works through neural recordings and behavioral experiments, and assess whether there are any other side effects to tissues in the affected area,” Anikeeva says.

This is “a completely novel approach for deep-brain stimulation,” says Bianxiao Cui, an assistant professor of chemistry at Stanford University who was not involved in this research. “The new method is significant in that it is relatively more easily administered and induces less brain-tissue responses as compared with electrode implantation. More importantly, the stimulation could be remotely controlled, a highly appealing feature for deep-brain stimulation.”

Writing for BetaBoston, Nidhi Subbaraman reports that Prof. Polina Anikeeva has received a new grant from DARPA to investigate ways to stimulate specific neurons in the body using fibers or nanoparticles. “Zapping key nerves with a current, ultrasound, or with light is expected to treat a range of conditions,” Subbaraman explains.

Mo Costandi reports for The Guardian on how Prof. Polina Anikeeva has developed a new technique to activate brain cells using nanoparticles. Costandi explains that, “research like this may eventually allow for wireless and minimally invasive deep brain stimulation of the human brain.”